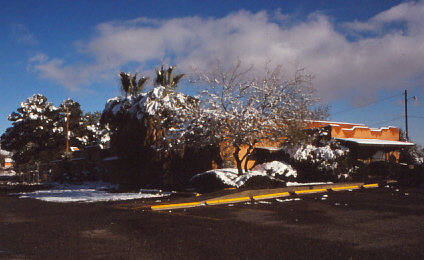 Griggs Restaurant is probably my all time favorite restaurant in El Paso, but I say this with qualifications.  Today I do not eat as much Mexican food as before, so I would regard it as more of a “special treat” restaurant.  Another qualification is that the quality was not consistent.  I could always count on Mr. and Mrs. Griggs producing top notch food, but when they retired the restaurant closed and then reopened with the younger generation managing it.  Also there was another Griggs Restaurant in East El Paso that was sold to another owner.  The end result is that I have the best memories of the original restaurant on Doniphan.  The others were good as well, and occasionally as good as the original.

I know that there is a somewhat sizeable group of people who remember the restaurant fondly and miss it, but what I want to do here is explain the food rather than just do an article on El Paso nostalgia.  I have a copy of the Griggs family cookbook with recipes used in the restaurant, but rather than try to post the recipes I will include a link to a blog that has already done so: Won’t Read Directions 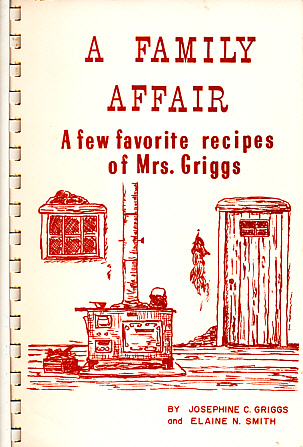 One thing to understand is that Mr. Griggs grew up in Las Cruces, New Mexico, and the restaurant served New Mexico style Mexican food.  More specifically, it came from the recipes developed by his mother Josephine Griggs.  Her children operated some very well known New Mexican restaurants in 1968 when the cookbook was published–Griggs Restaurant in El Paso (Edgar), La Posta in Mesilla, NM (operated by Katherine and her family but founded by Katy’s uncle, George Griggs), and El Pinto in Albuquerque (operated by Consuelo, another daughter, along with her husband and six children).  The other daughter operated a restaurant in Rancho Cordova, California named La Posta de Rancho Cordova.

I have come to the following conclusions about the Griggs family recipes and this restaurant “empire”: (1) each of these restaurants developed its own modifications to these recipes, (2) most people who try to cook these recipes find that they are very hard to cook without making some modifications, and (3) if you follow the recipes the food does not taste the same as the food served in any of these restaurants.  I do not know why this is the case, but it really does not matter to me–I had no intention of actually trying to cook the dishes, I only wanted to enjoy the food at the various restaurants.

I have always thought that Griggs Restaurant was more “authentic” New Mexican than either La Posta or El Pinto (and I have been to both of these restaurants multiple times).  One reason I say this is that Griggs used fairly spicy chiles while La Posta is very much on the tame side (I have heard that El Pinto has some very spicy chile but that you have to get this by special request).

The “original” Griggs Restaurant (operated by Edgar and Rita) closed before I started writing reviews, so I do not have a review of the restaurant to include in this article.  Instead, I have various write-ups and bits of information that I can piece together to give a picture of the original Griggs Restaurant (in west El Paso) and the east side Griggs.

The Griggs family reopened this restaurant with the original recipes, and it has the best New Mexico style food in town. I like the red and green enchiladas, chiles rellenos, and stuffed sopaipillas (I order them with the red chile used on enchiladas). The Griggs extended family originated La Posta in Mesilla and El Pinto in Albuquerque, New Mexico. For some reason, though, only this restaurant seems to provide the rich flavors and spiciness that I think accurately represent the original family recipes. Salsa is the one example of food here that is not very spicy, and probably out of the mainstream of New Mexico style food preparation. This is a minor detail, though, compared to the overall excellent meals that are served.

A restaurant that has been around as long as Griggs runs the risk of falling off the radar screen, especially when it is set back from Montana Avenue and only a non-lighted sign is visible from the street. It has also been through quite a few bumps with the closing of its Mesa Hills location and the on-again, off-again saga of the original Doniphan location (the original restaurant closed, then the children of the owners opened it as Griggs Family Restaurant, then it became became Dos Señoritas under different ownership, and finally a branch of Sombras del Pasado before it closed for good). 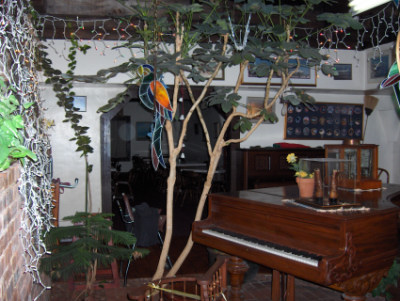 I have felt that the food quality has also been on a roller-coaster ride with the different owners, managers, and cooks. Anyone who knew the Griggs family cannot help associate the friendly smiles they would get and the home cooked style food that was served with the restaurants bearing their name. Of late, though, this has seemed a distant memory as the food seems to get more anglosized, or tourist oriented (as I feel that it always has been) but without the special touches I thought the food always demonstrated when the Griggs family was in charge of the kitchen. A chilehead could overlook the wimpy salsa and mild chiles because of the quality of the food, but it does not seem to have the same quality at the Montana location. 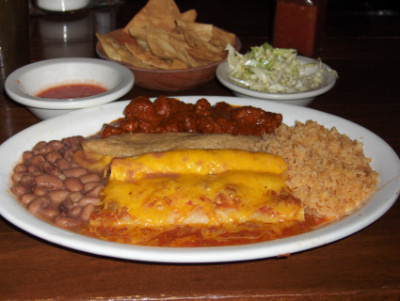 Certain items at the Montana location (and at the other locations when they were open) always seem to hit the spot regardless of the cooks that are in the kitchen. One is the New Mexico style Chile Relleno, a Mesilla Valley chile surrounded by an egg batter, with no sauce on top. At times the relleno has been beyond greasy (this has been rare, though). It has only been less than enjoyable, though, when the cheese inside the relleno failed to melt (this has been quite rare indeed). I normally order combination dinners at Griggs, but with any dinner ordered I would recommend the inclusion of a relleno.

Green Enchiladas are another standout item, and are rarely less than perfect. Of course, perfection depends on the standard being used. The green chile used is not the spicy variety served at Chope’s in La Mesa, New Mexico, or a number of other New Mexican style restaurants. The one at Griggs is a mild version that even people not used to eating any kind of chiles would enjoy, yet I think the flavor rivals just about any enchilada served in the Land of Enchantment.

The Red Enchiladas have never been one of the outstanding items at Griggs. They were excellent at the Doniphan location, however.

Chile colorado, known as Chile con Carne at Griggs had a superior New Mexico style chile at the original Griggs on Doniphan. The one served at the Montana location, though, seems to lack the flavor that made the other one so good. Likewise the roast pork does not taste like anything special, while the meat at the original Griggs seemed to embody the essence of New Mexico style pork that made eating this dish seem like a special experience.

The slaw is outstanding, and I like the fact that whole beans are served rather than refried.

I do not know whether Griggs’ tortillas are home made, but they certainly taste as if they are. I always found this to be a much more pleasant way to fill up on carbohydrates than trying to down the usually stale chips with the practically chile-less salsa.

The food at Griggs may be familiar to those who have eaten at La Posta in Mesilla, New Mexico or El Pinto in Albuquerque. The Griggs family were early settlers in Mesilla, and various family members founded these three restaurants (all of which are still in business, but with different owners). While the current owners of the New Mexico restaurants have made them “touristy” on purpose, Griggs in El Paso has retained the original Griggs family recipes fairly well (they used to publish a recipe book that has some fairly authentic dishes). I cannot say the Griggs Restaurant serves totally authentic New Mexican cuisine, but it is one of the closest experiences El Pasoans can find to the type of food that would be served in Las Cruces or Albuquerque.

The latest development in the Griggs Restaurant saga is the opening of Peppe’s Restaurant in Canutillo, Texas by a former cook at the original Griggs Restaurant.  I have enjoyed the food here very much, although I think the menu is a little abbreviated from the original Griggs menu.  I have heard that the owners of Peppe’s would like to publish their own version of the Griggs recipes that will be closer to the food served in the restaurant.  I don’t know the progress on this, but maybe if there is a large demand for it, it will happen.  In any case, if you liked Griggs Restaurant, go to Peppe’s (my sentiments are the same as many of the Yelp reviewers on this point).

I do want to stress to readers that the Griggs food is still available at Peppe’s, and for my taste it is still much better than La Posta or El Pinto in New Mexico.  I would probably like Peppe’s to expand its menu, but as long as I can get the green enchiladas, chile relleno, and chile con carne I think I will be pretty happy.

Information for Griggs Restaurant on Doniphan:

Cuisine: Mexican New Mexican
Cost: $$
Alcohol: Home of the “Juan and Only” Margarita