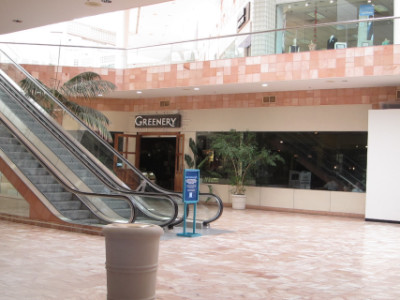 Greenery Restaurant has evolved over the years from a snack bar/ restaurant in the old Popular Department Store to one of the most upscale restaurants in El Paso. Still located in Sunland Park Mall, it is now occupies a large enough space to offer meals for shoppers as well as others who come to the Mall just to eat. 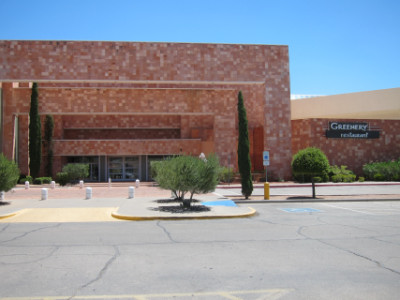 Greenery is a  “New American” restaurant with mostly American items on the menu (but also a number of Italian, Mexican, and Southwest style dishes). I think there is also a trend at the restaurant that the American items do not have a traditional American flavor. For instance, the meat loaf is made with green chile. The chicken pot pie not only has green chile added, but the traditional chicken broth has been replaced by a more Italian tasting gravy.

Previously there was a market next door that sold made from scratch baked goods, gourmet European meats and cheeses, and other items. The market was closed several years ago, but some of these items are still for sale behind the cash register at the restaurant. I think many of the items that used to be sold in the market are still used in the restaurant’s recipes.

Some of the entrées are on the pricey side, but a large number of sandwiches, salads, pizzas, and similar items can provide a lighter meal for a reasonable cost. The prices have creeped up lately along with most other restaurants in town, but it is still mostly a good deal for the money and for the quality involved.

The vegetarian menu is small, but most items are so flavorful and substantial that they would be satisfying even to a carnivore. The Wood Fired Pizza is one of my favorite items, and comes with several choices of meat and vegetarian toppings. To me the vegetable pizza is quite good. 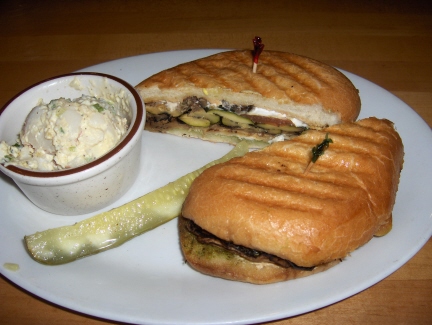 Eggplant panini is one of several types available

The Eggplant Panini is flavorful, and the ingredients are so fresh it is more like a west coast restaurant than the typical desert Southwest establishment. I do not generally care much for eggplant, but the one served here is pretty good. I also like the goat cheese used instead of the typical sliced cheese that is found on most sandwiches. The biggest disappointment, though, is the fact that artichokes are not served on the panini as they used to be at the now closed Kern Place Market (this was the panini by which I measure all others). The fresh bread and vegetables are quite good, but I would just prefer it with a different selection of vegetables.

Other sandwiches, such as the Southwestern Tuna Sandwich, are good as well. Although the vegetarian selection is limited, there is quite a range of meat options. 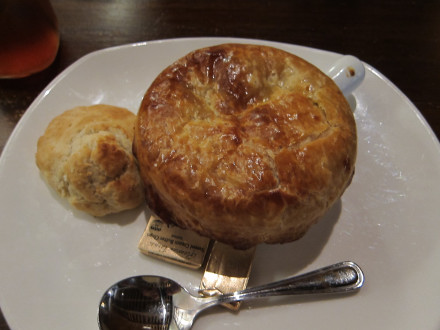 I have recently begun trying the larger plates here, mainly because I heard that some of them had green chile. The Chicken Pot Pie is one of the items with green chile, but there are some other non-traditional features about it as well. While the traditional pot pie is made with chicken broth, this one has a large number of vegetables inside that make up a large part of the “filler,” and the seasoning tastes very Italian to me. It is not spicy as I would expect with most green chile dishes, but it does have a mild chile flavor that definitely lets you know you are eating green chile. I like the flavor of it, but I also wish they had a traditional pot pie because most of the restaurants that serve it this way do not use the quality ingredients I find at Greenery (and I would like good choices for both of these two styles). 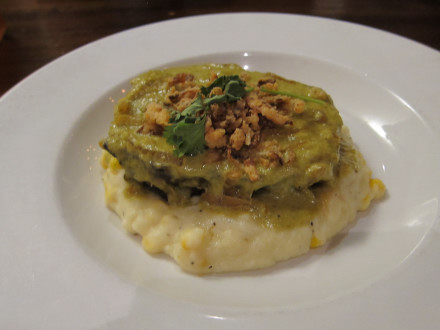 I also tried the Green Chile Meat Loaf, and had the same reaction to it. While I liked it, I wish they also had a traditional version because it seems that the restaurants which do it are not using the quality ingredients that I find at Greenery. I did like the bed of mashed potatoes underneath which gave the plate more substance as well as good flavor.

Mexican Food
Greenery has made Mexican food one of its specialties, and while almost every restaurant in the city serves Mexican food in some form each one does it a certain way. At Greenery it seems to be the upscale style found in Ciudad Juarez at hotels or stores such as Sanborn’s where you can go shopping and then eat in their coffee shop styled restaurant. I asked enough questions at Greenery to find out that their chefs are from Ciudad Juarez (at least the ones who cook the Mexican food). They take pride in preparing authentic Mexican food that I call “gourmet,” but it is actually the traditional dishes (such as enchiladas) that are cooked in a gourmet fashion rather than being a high-end restaurant serving steaks, etc. 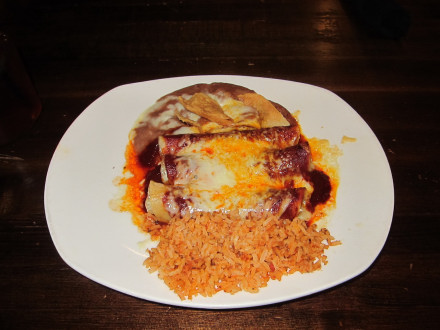 It seems that in El Paso I cannot get enough Red Enchiladas, and I really enjoyed the ones here. They did seem to be authentic, but authentic ones that I remember from upscale Ciudad Juarez restaurants such as Julio’s rather than the “street food” style which also exists. These have a deep red colored chile and a mixture of white and yellow cheese (and most of the cheese was on top where it gets melted properly). Like most authentic border style enchiladas the spice level gets close to that of New Mexico chile but it stops short of being what I would really call spicy.

The sauce had an earthy or “crude” flavor (in Spanish I think of the term crudo as meaning very strong and getting the raw elements such as the straight red chile without the finesse of mixing it with a lot of spices, etc. to tone it down). In any case, if you like red chile I think you will like the enchiladas here. I am thinking that perhaps what I associate as being “crude” is actually the taste of cumin, which the staff told me that the red chile contains. I do not know if this was an informed statement and that it actually contains cumin, but I will say that while these are not my favorite enchiladas anywhere, I did like them and they did remind me of the ones served in the upscale restaurants in Mexico. They were spicier than many of the enchiladas in Mexico, though, and were definitely border style in this regard.

I also noticed the toasted tostada chips stuck into the refried beans that reminded me of the ones at Leo’s or Avila’s where the enchiladas are baked. I think the ones here were baked as well, but the only thing I can really attest to is that they came out at a good temperature. 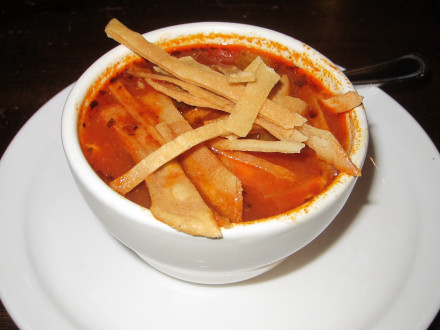 If you get a chance to try the Tortilla Soup, it is excellent (it is currently served on Tuesdays as the soup of the day). Although I think they go overboard on the chicken, it is quite fresh and flavorful, and it is superior to many places in which the tortilla soup is supposed to be a signature dish.

Other ingredients used in the tortilla soup include a noticeable amount of green chile and celery (which do give a flavor offset to the large amount of chicken they use). The tortillas are crispy and not oily.

The broth is spicy and the flavor is very strong (this is perhaps what I think is the weakest part of the soup, although it does seem to be very authentic Mexican style). I got the cup of soup but they do serve it in a bowl (perhaps it would be enough for a meal but I prefer the cup along with an entrée such as the enchiladas).

Other Comments
It seems that Greenery has been in El Paso for about as long as I have, and as long as Sunland Park Mall has existed (I think this is now far enough back that the El Paso History Radio Program could do an episode on the malls). I used to enjoy Greenery because it was somewhat of a novelty in a town that did not have a lot of upscale choices. Later it fell off my radar, and recently I have wanted to experiment with items on the menu I have not tried before. Most of the time the food is not quite what I expected it to be, but I am often pleasantly surprised.

What I have to deal with here, though, is the fact that it is “New American” (it is largely Southwest style, but so much of the food has an Italian flavor that I think New American is a better term). The chicken pot pie is not the traditional style, although the combination of the very good ingredients here and the fact that it seems much more healthy than the way others serve it are enough to make me a fan (and of course it helps that it has green chile).

However, traditional American food seems to be what is missing here, and with items on the menu such as chicken pot pie and meat loaf, this may be a little misleading to some. The only problem with the way they do the food is that it is competing with many other restaurants that do the same thing. With this much competition, I can say that the quality at Greenery is always very impressive, but the flavors have been hit or miss with me, and is the reason I sometimes prefer other restaurants.

I think the Mexican food here is slightly better than what I have tried on the American side, but both are very good and I am perhaps struck more by the high quality ingredients than the actual flavor of the food.