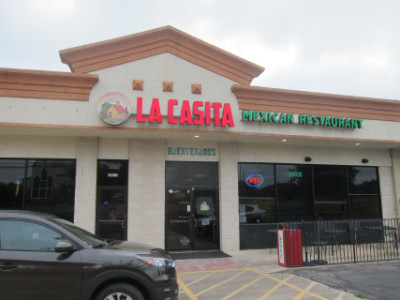 The main business of this trip had me in the Austin suburb of Pflugerville for the day, and I actually ended up eating at the same restaurant for two meals in a row. La Casita, conveniently located in downtown Pflugerville, was not only in a good spot geographically, but was a unanimous choice to grab our second meal of the day as well (although because of time constraints we did not have much of a chance to think about other choices).

In almost every respect eating at La Casita was like eating at one of my favorite Mexican restaurants in El Paso–it was a casual restaurant with authentic food where families liked to come to hang out (at lunch there was a group of about 20 people eating at a large table who appeared to be an extended family). I think restaurants like this are not so notable unless you are anywhere that is not near the border (for instance there are a number of places like this in Oklahoma City except for the fact that the food is usually not really authentic). My friends and I ate several dishes at La Casita, and every one of them was spot on as far as being prepared Mexican style. (In reading reviews of La Casita it appears that you can get some Americanized or Tex-Mex items here but they do not seem to be the most popular items at the restaurant).

The food was excellent, although it was not the Chihuahua style food that is widely available in El Paso (nor would I want to come to Austin and get the same food I would have at home). The menu had a clue about the style of the food by dishes that had names such as “Potosino,” meaning it was from San Luis Potosí. I did not ask the staff, though, about what style of food they were serving. 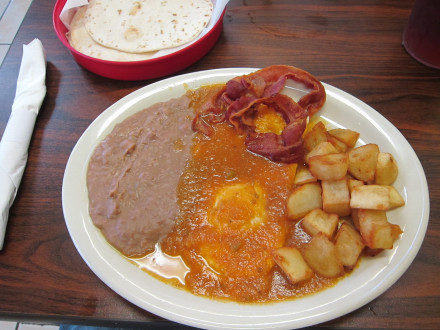 Huevos Rancheros are an item at Mexican restaurants that can either be really good or really easy for them to mess up. Fortunately, in this case it was the former. The side dishes (bacon, potato, beans, and tortilla) played no small part in making this a great experience. I did notice, though, that in Austin they really like to include bacon as part of the breakfast meals while in El Paso you normally have to order it separately.

The salsa ranchera was very good, spicy like the ones in El Paso, but with its own flavor that did not make it a clone of the ones I eat all the time.

I did not know it at the time, but the breakfast specials are available all day although at a higher price after 11 a.m. My meal did not come with chips and salsa (this is a difference between La Casita and most of the restaurants in El Paso). For lunch and dinner, though, all meals come with chips and salsa (this may be one reason the breakfast plates are more expensive after 11 a.m.).

Lunch
I do not think there is any difference between the lunch and dinner menus, at least on Saturday when I went. What you can do, though, is order just about any item a la carte, and you do not have to stick only to the large plates that are on the menu (everyone has a different definition of “large” but I only mean that they are a full meal). 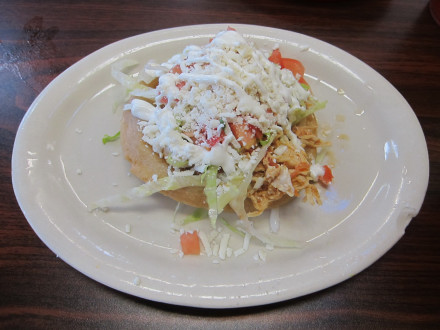 One of the lunch/dinner items I tried was the Chicken Sope. This was a very fresh and very flavorful item that I have not experienced much because they are almost unknown in El Paso, and I have only had them in the most authentic restaurants in Oklahoma City. This one, though, was among the best I have tried.

The only thing missing with a sope is spiciness, but La Casita remedies this by giving you flavorful salsa to put on it if you wish. The flavor and spice level of these salsas can hold its own with any I have had in El Paso. 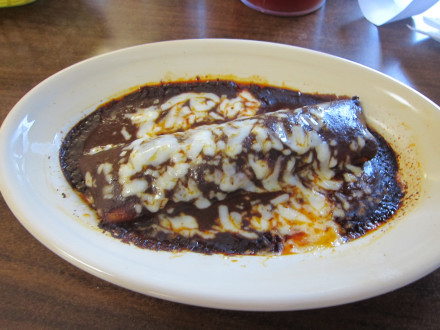 The mole enchilada started out as just something on the menu that looked like it might be good and turned into one of the highlights of the trip. Technically, it was a Chicken Enchilada with Mole that I ordered a la carte. The amount of mole they put on it almost made it a meal, but of course I am not complaining.

One of the items on my bucket list in Austin was to go to one of the Oaxacan restaurants that served mole and see what the “real deal” tastes like. I did not get to do this, but I am happy after having the mole at La Casita. This was a very flavorful and complex mole that tasted like it was made from scratch (if it came from a mix I would sure like to know where they got the mix). Mole is one of the most lauded dishes on the reviews, so I suspect this is the real deal (some reviewers comment that they travel quite a distance for this restaurant’s mole). I do not know if this is the way mole is prepared in San Luis Potosí, but it is very good.

Most restaurants in El Paso serve “Mole Poblano” (mole from Puebla). I am now taking this with more than a couple of grains of salt because much of it does not seem like something Rick Bayless or the better chefs would serve. I do not know if La Casita’s version is authentic, but I think it is better. Compared to the El Paso mole, this one is spicier, not as sweet, and has a sharper taste (and not is a bad way such as if you are thinking it might have too much chocolate–it does not). Anyway, I also have the knowledge that some of the Oaxacan restaurants in Austin charge 30 dollars or more for a plate of mole while the one at La Casita is much less expensive (and as far as I can tell gets equally good reviews). 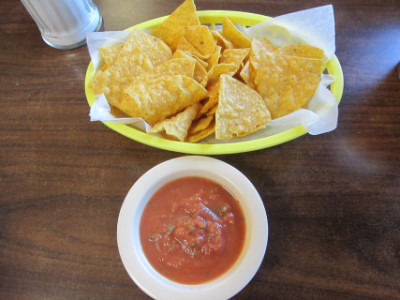 Also notable was the Chips and Salsa. This salsa was about 2 out of 5 on the spiciness scale, but was about as flavorful as any I have ever tried. I have tasted many salsas in the United States that were 2 on the spiciness scale but zero to one on the flavor scale. The salsa here should make a lot of restaurants re-think what is possible with non-spicy salsa. (Note: La Casita has spicy salsas available as well, and serves them automatically with many dishes).

Other Comments
This place is not fancy or expensive, but it does have very good food. I think the service is not to the level the restaurant would like it to be (such as when they have a large table with 20 people and are trying to serve an otherwise full house at the same time). I think, though, that its popularity speaks to the type of food they serve.

I also want to say that the city of Pflugerville itself is interesting. It is not true suburbia, but has its own downtown as well as at least one modern outlet mall for small town living as well as modern amenities. I have a city planning background (and in fact got my degree at the University of Texas). Pflugerville seems to be using many planning methods that make it better than the typical suburban city. The only thing that seemed to be missing (especially from an Austin standpoint) might be its pedestrian/ bicycle/ transit element.

One thing Pflugerville has when compared to other cities the same size is a large choice of restaurants with various cuisines. La Casita made me see that local people go for quality food and not the typical “suburban” restaurants.