Johnnie’s has always been one of my go-to places in Oklahoma City, and for me it has really been the place for hamburgers and veggie burgers. One of the secrets here is their signature Johnnie’s sauce, which I understand that Johnnie developed based on his experience working at the old Split-T on N. Western Avenue. This is a variant of the barbecue sauce found in many Oklahoma “Q” restaurants, although I think the sauce at most barbecue places is both sweeter and tangier than the sauce served here. For flavor, though, I really think Johnnie’s sauce is the best I have found (especially when served on hamburgers).

The biggest downfall at the Johnnie’s Restaurants lately has seemed to be their consistency. For one thing there are several locations (meaning different managers and cooks). Even for a specific location there are variables such as which cooks are on duty. A lot of factors can detract from the hoped for perfection of Johnnie’s burgers including how the meat is cooked and even the bread (I love their sesame seed buns but at times they have changed it to a plain bun–I assume out of necessity at the time). One thing that always seems to be good, though, is the Johnnie’s sauce.

These and other variables apply to the different locations where I have eaten over the years. They do not apply yet to Johnnie’s Express on North May near Quail Springs Mall. After two visits I found both the burger and fries to be perfection–everything I remember about Johnnie’s that it is supposed to be. I was extremely happy and of course suspicious that over time this restaurant would have the same variability I have found at other locations. For now, though, I can report that this location has food as good as I have found at any of the Johnnie’s restaurants. I believe it has an abbreviated menu from the regular restaurants, but the all important burgers and fries are served here, and this is what I would recommend at any Johnnie’s restaurants at least for the first visit. 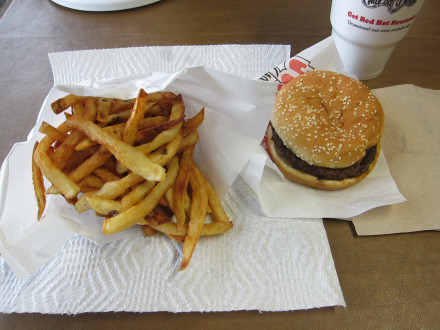 Burger and fries from Johnnie’s Express

On my initial visit I ordered my favorite burger, the No. 1 Hamburger  with Johnnie’s sauce. The sauce is cooked each day for about five hours, and is made with a secret blend of ingredients. Other burgers come with extra ingredients, such as pickles, onions, etc. at no extra cost. Many also like the Theta burger with Johnnie’s sauce, mayo, and pickles (I think the Theta cheeseburger is especially popular–the cheeseburgers are slightly more expensive).

The charcoal broiling method of cooking is probably the most important reason to come to Johnnie’s, though. I even thought the charcoal broiled flavor of the meat was more pronounced here than I have found at other Johnnie’s locations for quite some time, and it made the burger here a special treat.

French Fries
French Fries are my usual side order at Johnnie’s but they are by no means the only one I like (the baked beans have also been excellent at the other locations). The fries I had at Johnnie’s Express were just right in the way they were prepared and lived up to my expectations, as the hamburger did.

Drinks
The Iced Tea at Johnnie’s is definitely one of the best in town, with the clear ice they use being almost as notable as the tea itself. The tea at the other locations has not been subject to the same variability as the food, and for me this has always been a good choice for a drink (although if you like milk shakes they have excellent ones here).

Johnnie’s Express does most of its business through the drive-through window or they will also bring it outside to your car. I am unclear about whether they have an inside dining room because I have never tried to go in to look.

The burgers and fries at Johnnie’s, though, do particularly well at maintaining their temperature and flavor when served as takeout orders. This is one case where I have enjoyed fully satisfying meals even when I did not have the time or opportunity to eat in the dining room.

Some may also be interested to know that they have half price drinks between 2 and 5 p.m. Monday through Friday.