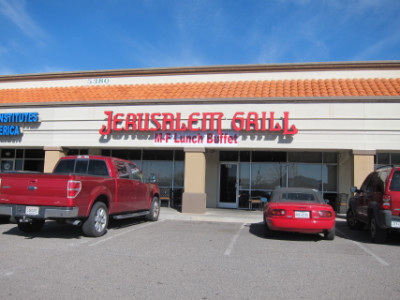 Jerusalem Grill joins a long list of El Paso restaurants that has made an effort to reinvent itself to reflect the changing dining scene, while keeping many of the features of the old restaurant that people liked. Jerusalem Grill was formerly located in the same building as the Market (5360 N. Mesa), but the restaurant has now moved to 5680 N. Mesa while Jerusalem International Foods (the market) is still in the original location. 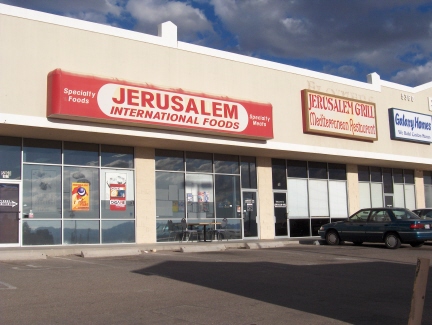 Photo showing the original Jerusalem Market and Jerusalem Grill, which used to be next door to each other

As I understand it, Jerusalem Grill is now operated by one of the children of the original owners, and it has become more upscale. I think there is really no difference in the food from the original restaurant, except that they have added a few items including a new hot tea that is very good. There is now a lunch buffet, which to me seems to be the best feature of the new restaurant.

Because the food is basically the same but is just packaged differently, I am fairly confident in merging the review of the old restaurant into this one. 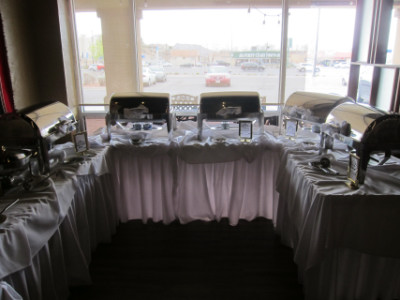 The lunch buffet is definitely the best way to try the most items at the cheapest price (the buffet currently at $12.99 is not cheap but is very competitive with lunches at other restaurants). 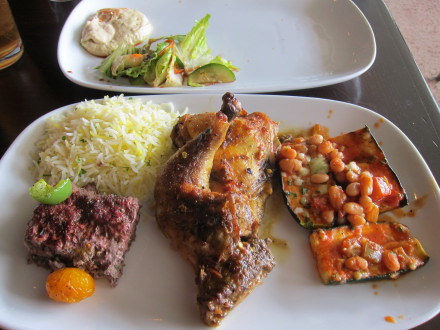 I should first make the comment that there are not a lot of selections on the lunch buffet, but I found every one of them to be very good. Two items were really the best, one of them being the Roasted Chicken (I have also had this from the dinner menu). The Moussaka was also excellent. The only other place I have found moussaka in El Paso was at Casa Pizza, but the one at Jerusalem was vegetarian and had an excellent sauce that really made it my favorite. 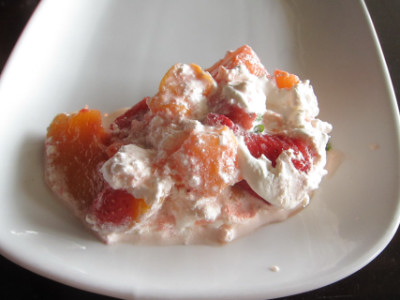 The Fruit Salad served for dessert was the only choice available, but I thought it was very enjoyable and went well after the meal. 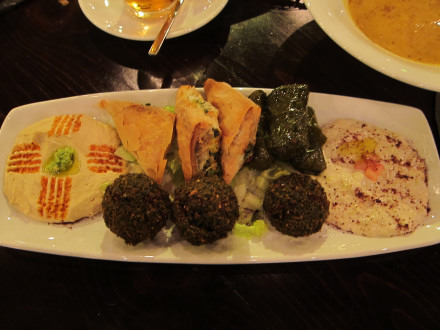 Officially called an Appetizer Plate, the “Veggie sampler plate” from the new restaurant and the “Veggie combo” from the old restaurant mostly include the same items. This is enough to make a meal, and most importantly to me it includes Falafel which is probably the best example of it I have tried. Although the flavor is very good, the most important element of it is that it tastes fresh and not from a mix (I don’t know if it is made fresh, but it tastes that way).

While at most Middle Eastern restaurants the Hummus is my other favorite item, here it is not. I found this one to have an ordinary flavor compared to the restaurants in Oklahoma City, although I still like the one here. The sumac on top gives it some spice and a good flavor, but I prefer the ones that have more olive oil.

In contrast, though, the Baba Ganoush was quite good compared to ones I have tried at other restaurants.

The Grape Leaves are the only item that I have found to be not as good as at the old restaurant, although it is something I would want to try again to be sure this was not a fluke. 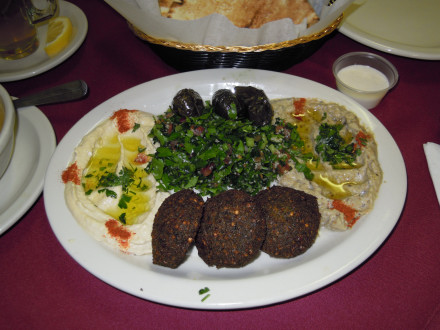 Veggie combo from the old restaurant

The vegetarian platter has changed a little bit from the old restaurant, but the most important thing to me is that the falafel is still served. 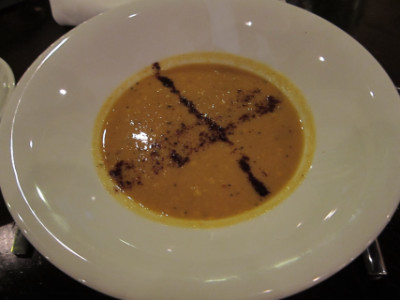 Lentil Soup is not part of the vegetarian platter (appetizer plate) but it is flavorful. It is also on the spicy side. 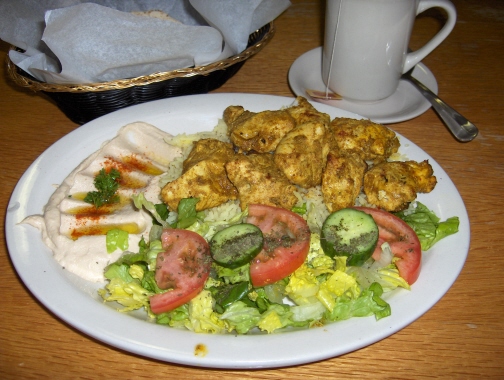 Chicken shawerma from the old restaurant

The Chicken Shawarma is an item I liked at the old restaurant but I have not tried it since Jerusalem Grill moved. Still, I think I can say it is one of the best items here 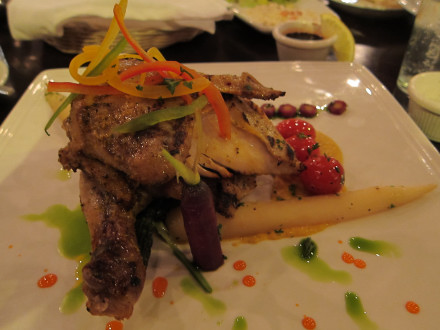 The Lebanese Oven Roasted Chicken from the dinner menu is the same as the “roasted chicken” on the lunch buffet, but presented with more garnishes. It also would have been too much to eat, but in this case it was shared by three people (along with with the vegetarian appetizer plate). My feeling in general about the dinner menu is that the items are too large for one person, although the restaurant does not make it difficult to share and the concept of family style meals seems to be part of the Middle Eastern culture.

Tea
The Middle Eastern style tea is made with loose leaves and was very good, although it was not a mint style tea. For the lunch buffet I found the iced tea to be good and a lot cheaper.

Other Comments
I have long considered the falafel here to be the best I have ever tried. Even so, the outstanding dishes at Jerusalem are probably the chicken dishes.

The vegetarian appetizer plate (veggie combo plate) makes a good meal from the dinner menu which is not too expensive. In general, though, I consider the vegetarian items at Jerusalem to be the weak point of the restaurant compared to other Middle Eastern restaurants. Of course the exception is the falafel.

The lunch buffet is not cheap but I definitely think it is a better deal than in many other restaurants. While some restaurants give you their cheapest stuff in order to have a good price, Jerusalem seems to include their best dishes at a price that is lower than ordering from the dinner menu.