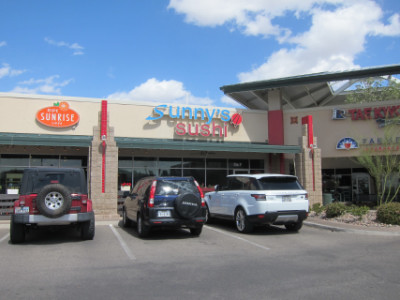 To me the national restaurant review web sites do not help much for restaurants such as Sunny’s Sushi. The information they give is that this is a Japanese restaurant, but my friends told me that the owners are Korean and that Korean food is really its specialty. I know that the name indicates that it is Japanese (and it does have some Japanese food, including sushi). There is a sushi craze in El Paso that I know restaurants want to use to their advantage, including this one. I only had a small sample of the sushi that came on the lunch special, and I do not know how their sushi ranks with other restaurants. What I can say, though, is that the Korean food is pretty solid.

For lunch they offer Lunch Box meals as their specials. I really do not think that you save any money eating these or coming at lunch, but what you get is a sampling of numerous items with a total quantity of food that was almost more than I could eat and was definitely more than I should have eaten (although sometimes I know it is all right to splurge).

Sunny’s has three locations in El Paso, and two are on the west side. My friends are familiar with the restaurant on Viscount, and judging from their comments it sounds as if the food is the same at all three locations.

My long time favorite Japanese restaurants in El Paso are Matsuharu and Riyoma, and for Korean food I like Han Il (some other Korean restaurants in northeast El Paso are also very good). The bulgogi was good, but otherwise Sunny’s did not serve anything that would rank it among these top restaurants for me. I have only tried it one time, though, and everything is always subject to trying new dishes and having different experiences. 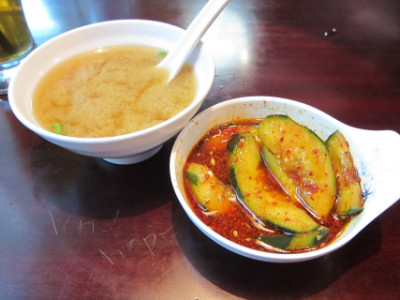 The two items pictured above come with all lunch specials. The Miso soup was very good, and tasted as if it was made from scratch (some in El Paso taste like they are made from a mix).

House Cucumbers have a red sauce that looks like kimchee, but I did not think it was nearly spicy enough. It may be the restaurant’s own version of kimchee, but in any case the cucumbers are good, and anyone can enjoy them even if they do not want to go anywhere near something spicy like kimchee. 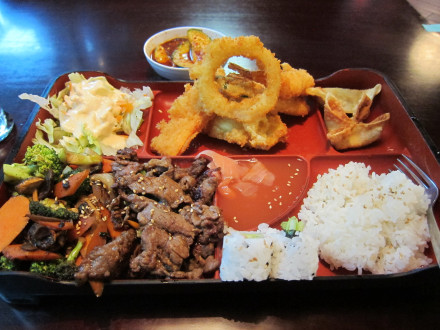 I am not sure if I got the Bulgogi Lunch Box because the waiter recommended it or because I did not see anything else I wanted to order, but I would say this makes a good choice. The meat is marinated and has a very good flavor, and its other qualities (tenderness, lack of gristle, etc.) are similar to those found in the Dyer Street Korean restaurants. The meal here is packaged differently than at the standard Korean restaurants, with this one concentrating on Japanese side dishes.

I thought the mixed vegetables and salad were the best side dishes on this plate, relegating most of the Japanese side dishes to “disappointing” status (not that I did not want to eat them, but only that they are better at some of the city’s Japanese restaurants). In my mind this is a pretty good Korean restaurant but a not very serious one for Japanese food (but my time spent in Seattle eating at some excellent Japanese restaurants enters into this).

The tempura was not disappointing in its flavor as much as I thought they should have given me some sauce to go with it.

The sushi and gyoza (dumplings) that came on the plate did not seem to be anything notable, but they were enjoyable.

Other Observations
Although the bulgogi on the lunch box special was as good as I have found at most of the city’s Korean restaurants, I also have to consider how it is packaged. The side dishes were not really disappointing as much as I have had better at many Korean and Japanese restaurants in various cities. Also I thought the price for lunch was pretty steep, but this is a disturbing trend I find at the city’s “Sushi” restaurants (as opposed to the traditional Japanese or Korean ones). Also the quantity of food on the lunch box special was more than I really wanted.

My bias is that I like traditional Japanese or Korean restaurants rather than fusion ones that serve both. I especially have very little desire for the “California Roll” type of sushi that is popular in El Paso. I should note, though, that I did not order the sushi at Sunny’s, and I am basing my comments on items that I like to order at other restaurants.

I looked at Sunny’s menu on their web site and it appears that the only choices at lunch are sushi or the various lunch box specials. Based on this it looks as if they have good food but everything comes in large servings (or at least expensive ones). I am not sure about the serving sizes at dinner menu but it is more expensive than lunch.

For those not familiar with El Paso, though, the Dyer Street Korean restaurants are on the other side of the mountain from Sunny’s and might as well be in another city. It is great to have good Korean food on the west side, and I am glad Sunny’s has not only one location but two in the area.