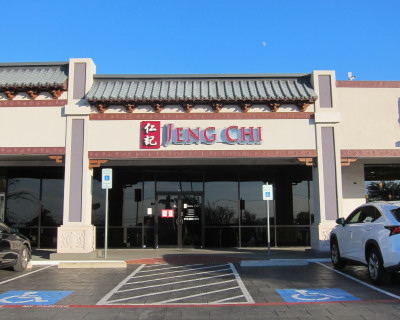 When I have a great experience at a restaurant a lot of it has to do with ordering the right items. Before going to Jeng Chi I read numerous reviews recommending the xiao long bao (steamed dumplings with soup inside), and I also know that there are a very limited number of restaurants in the United States that serve them. I had already tried them at Kirin Court, located a few blocks away in Richardson, and this just encouraged me even more that another experience would be worthwhile. 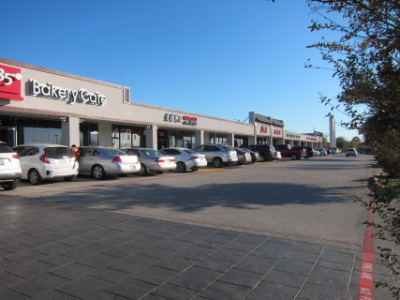 Part of the “Chinatown” strip mall in Richardson

If I were not on this particular mission it would be quite difficult to even choose Jeng Chi as a destination. It is located in the “Chinatown” strip mall which is filled with Asian restaurants and shops, quite a few of which also have cuisines which are as hard to find as the one served at Jeng Chi (xiao long bao is known as Shanghai cuisine although Jeng Chi’s web site says the restaurant has authentic food from Taiwan and mainland China).

The block long shopping center does have an air of authenticity in which you are unlikely to find any Americanized food, but rather a mixture of traditional foods from various parts of China and other Asian countries. Internet reviews also indicate that this is the case, but of course I hope I get the chance to confirm this on subsequent trips.

I happened to arrive at Jeng Chi at just about the only time it is not open–between 2:45 and 4:00 P.M. every day (but of course this means they are open the rest of the time every day). Although closed they let me sit in the lobby and relax while waiting for service to resume, and I will have to say that for me it was worth the wait to eat here. The combination of having outstanding food, prices that were commensurate but not inflated, and the right portion sizes gave me no regret that I passed up the other nearby restaurants. 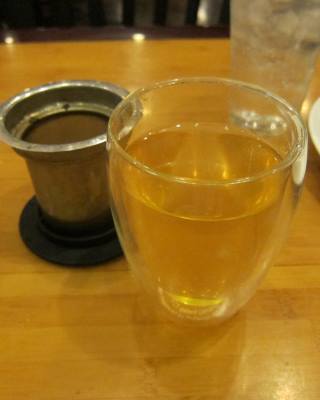 Before ordering the food I was asked to make a decision about a drink. This is because some of them take a while to prepare, but also they have some very special teas such as the Chur She Jasmine Tea I ordered. This was prepared in an infuser, and even with additional hot water it maintained its flavor. A wide variety of other drinks are available including tea, beer, and wine. 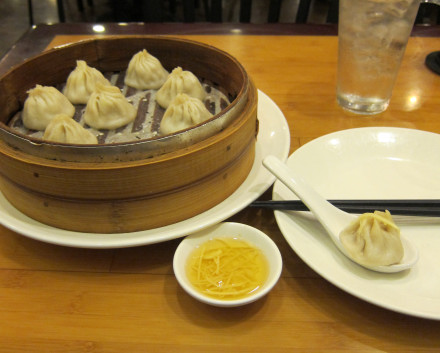 Xiao Long Bao is the unofficial specialty of the restaurant, and I say this only because so many people have reviewed it. Listed on the menu as “small juicy steamed dumplings” (which come in an order of 8), these are different than many others because they have soup inside. I thought they lived up to the hype, partly because they give you a ginger dipping sauce that adds to the flavor. They also instructed me about how to use the plastic spoon to trap any juice which spills from the dumpling so that none of it is lost.

One comment I would make is that they actually serve seven types of “Juicy and Steamed Dumplings,” as well as a large selection of boiled dumplings. A group of people could order several of them to sample, but I think it is hard to go wrong with the one I ordered.

I am sometimes known to go overboard on ordering food when I am in a place that has especially good choices, such as Jeng Chi. By ordering the Pork with Garlic Sauce, though I felt that this along with the dumplings was not really too much food if I considered it to be the main meal of the day (which it was). In any case, I got an unexpected taste experience which in some ways was equal to the dumplings.

Pork with garlic sauce is a somewhat standard dish that I order in many restaurants, but this one was different in that it had a red color. When I asked about this they said it was because of the chile (which is mixed into the sauce). It was quite strange because it looked like the red sweet and sour sauce found in many restaurants, but the complexity of the flavor in this dish placed it far from the ordinary experience of getting something with a red sauce. The chile level was about four out of five, and the meat was very good quality in keeping with everything else I experienced.

Additional Comments
I had a large enough sample of the food to make me think that this is not a restaurant that specializes only in one dish, but rather I believe everything is good. This is how I think Chinese restaurants should be, so that I am free to order according to my appetite rather than choosing among the few items they do well.

The dumplings lived up to my expectations, but the pork with garlic sauce was also the best presentation of this dish I have found in any restaurant. This might not have been the traditional Chengdu version of the dish, but it was so good that for all I know it may be totally authentic (but just not a way that other restaurants do it). The balance of garlic, ginger, and other flavors, though, did seem very authentic to me even though visually it was different from any others I had tried. 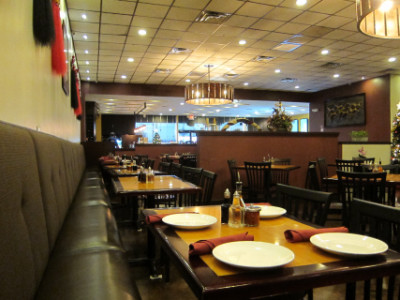 The restaurant is very comfortable and fairly upscale, although I was happy that the prices seemed to be at the level that you are only paying for the food and not the atmosphere.

One reason I liked the restaurant is that they explained everything, such as how to eat the dumplings, etc. They have a seasonal menu and probably items that are not on the menu (I did not ask about this but I am very sure they will work with you to get the type of food you want).

As of the date of publication of this article I am giving Jeng Chi the highest rating of any Chinese restaurant on my blog. This is not necessarily because I think it has the best Chinese food I have ever had, but because this excellent food is combined with ease of ordering and prices that do not make it for special occasions only. I think many Chinese restaurant have excellent dishes, but this is one place where I think most people can actually find them and know what they are ordering.