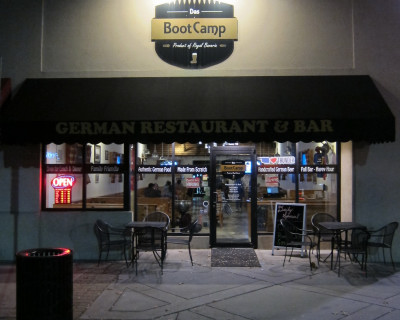 The official name of this restaurant is Das Boot Camp Restaurant & Bar, and I think the key part of it is the “Bar.” When I visited late at night on the way back from Dallas it was one of the few restaurants in town that was even open, and they were running a special on large servings of beer in a boot shaped glass (they could not have been making a huge profit from the prices charged for the beer but it seemed to also get people in to try the food).

For most people (in Oklahoma, at least) it does not take much persuasion to get them to order some good German food, and of course it is a natural to go with beer. Das Boot Camp happens to be an outgrowth of Royal Bavaria, a standard dinner style restaurant in Moore, and the German food at these restaurants is well known as being the real deal. The menu at Das Boot Camp is scaled down from the larger restaurant, and is more of a bar menu, but there are still enough choices for a full meal.

When I went to Das Boot Camp I did not have a huge appetite and I was not looking for the type of full meal that is served at Royal Bavaria, so for me Das Boot Camp was perfect. 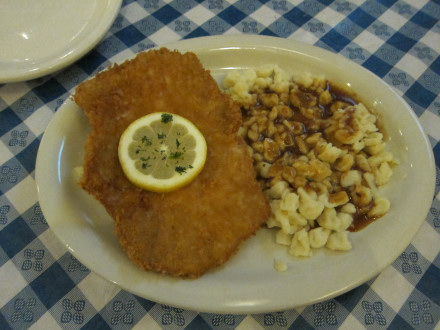 Wiener Schnitzel was one of the six or so items that are served as dinner items (the rest are sandwiches, soup, appetizers, etc., although they also have bratwurst plates). I thought that this was as good as any schnitzel I have had in Oklahoma, with good meat and a good breading.

The more disappointing part of the meal was the spätzle (I have had others with a better flavor). I ended up ordering fries, the side that normally comes with the schnitzel (they substituted the spatzle for me), which I thought went better with the dish. Overall this was a very satisfying meal and still at a good price.

Other Comments
If you go to Royal Bavaria instead of here you will have other dinner choices such as Hähnchenbrust and cordon bleu. Das Boot Camp advertises that all of their items are under $10, so you just get basic German food here (although it is the same as Royal Bavaria in terms of being authentic).

I think one of the biggest advantages of going to Royal Bavaria is in the side dishes. Royal Bavaria has items such as Bavarian potato salad which I thought was excellent (and may be the same as the potato salad served at Das Boot Camp), but the large menu at Royal Bavaria makes me fairly certain that whatever you want you would be able to get there.

I need to try more items at both restaurants to make a fuller comparison, but it seems that the main difference between the two restaurants is that Royal Bavaria Restaurant has a larger menu with more expensive and fancier items.