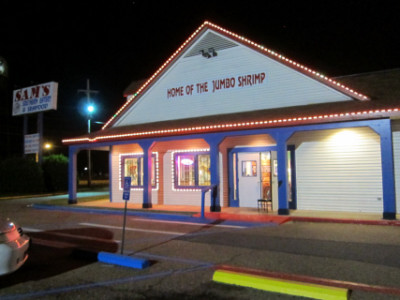 Sam’s Southern Eatery is a chain of Cajun style restaurants based in Shreveport, and which consistently shows up on restaurant review sites as a readers’ favorite. There are several locations in the Shreveport area, and they appear to be individually owned although linked to the chain through the supply of shrimp they receive as well as following the same recipes for cooking the food.

One feature pointed out to me that made this location unique was its sale of freshly made home made cakes. The regular menu appears to be the same at all Sam’s locations, although I did notice some differences between this restaurant and the one I had previously tried in Oklahoma City (the OKC restaurant served fried rolls and this one did not). 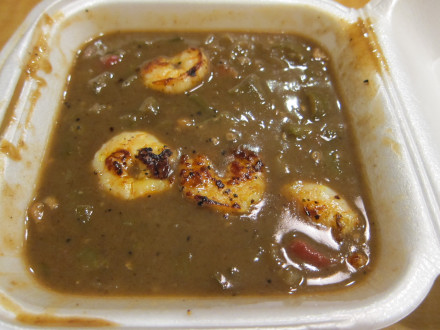 The Gumbo was my main order, and it was a very good one. They were out of the rice that usually came with the order, but I thought the gumbo was very good anyway. The flavor of the roux was really a lot better than the one I had tried in Oklahoma City, although the shrimp and other ingredients were about the same at both restaurants. This was not the largest size gumbo they had, but was nevertheless filling if you ate it with side dishes. 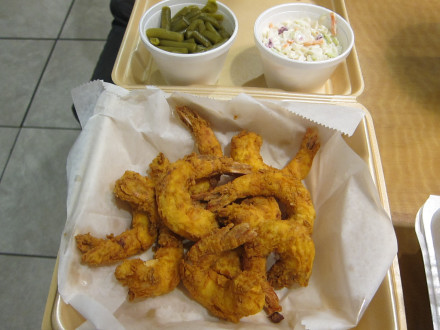 The sign on the front of the restaurant says “Home of the Jumbo Shrimp,” and this is to be taken seriously. I think these are actually prawns, but in any case this order of eight shrimp really seems to be enough for three people although two of us with great effort managed to eat it (and enjoy it very much).

My dining companion ate the side dishes, and they were reported to be very good as I have found them to be in the Oklahoma City Sam’s. 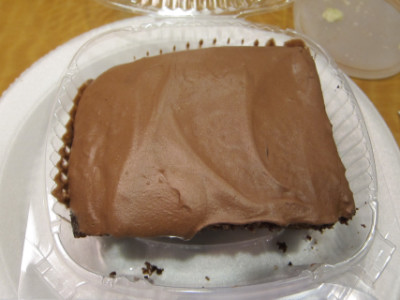 This location features home made cakes made by a third party, with about eight or ten varieties available. The restaurant recommended peanut butter and reviews also indicate this is one people particularly like, but I thought the chocolate I ordered was quite satisfying (you probably can’t go wrong with any of the flavors).

General Comments
This was not the absolute best fried shrimp I have ever had, but it was close, and I can see why it is the featured dish of the restaurant. Keep in mind, though, that the pieces are quite big. In my mind about three or four pieces per person is about right if you eat it with side dishes or a small gumbo.

The gumbo is what I enjoyed the most, though. I feel that it is a special treat to get gumbo as good as the one here, and ones with comparable flavor are not available in most parts of the country.