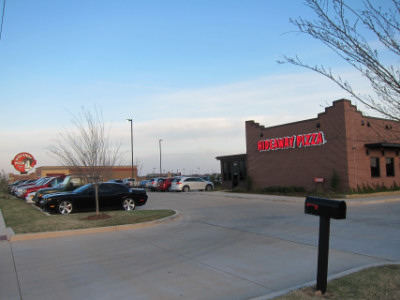 Hideaway Pizza is continually adding locations throughout Oklahoma, and it is hard to keep up with how many there are. I think there is good reason for its popularity, especially because of its famous “Hideaway Red” sauce, a sauce that no other pizza chain seems to be able to match. I was wondering why the original location in Stillwater was not listed, and I learned that they sold the franchise to the company that operates the other restaurants, which are collectively known as “Hideaway Number 2.” 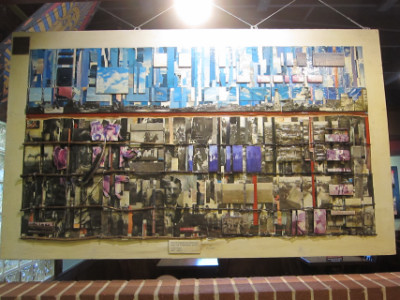 Hideaway always seems to have displays from schools or other civic groups, and sometimes has art displays such as this “Native American Heritage” collage. There are a couple of dining rooms which can be used for large groups, and whether they come in groups or with their families this is a popular place for young people. I always like the ambience here because the seats are comfortable and I always seem to have a peaceful meal in spite of there usually being a lot of activity going on.

In 2015 they deleted a number of items from the menu including the “Old World” margherita pizza that I used to order. It turns out that you can still order some of the old pizzas if know what to ask for, and if you are not sure they seem to be able to work with customers for special requests. The new margherita (which is not on the menu) is not exactly like the old one, but I still like to order it.

The “Build Your Own” section of the menu gives customers some good options, although I don’t think I have ever tried to do this. They also have sandwiches and pasta dishes (which I have also not tried). Some of the salads are good, and this is another reason I like the restaurant overall.

Although my drink of preference is iced tea (which is very good here) I took some notes about the alcoholic beverages. There are several kinds of draft beer including Stella Artois from Belgium, and bottled beer which includes ones from local breweries in Oklahoma, Montana, and Colorado, among others. Drinks include Bloody Mary, Long Island Iced Tea, Sangria, and Margaritas. Wine comes by the glass or the bottle. There is a happy hour from 4 to 7 pm during which all bar drinks are half price. 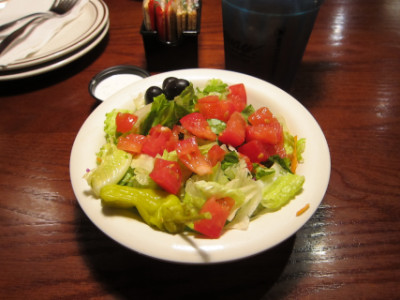 Surprisingly, I have found that the salad is one reason I like to come back despite the menu change. The Just-A-Beginner Salad is simple but quite fresh and enjoyable. I had gone to Ingrid’s one time where the meal came with a salad that I thought was much better than Hideaway’s, and it made me wonder why I thought the one here was so good. At numerous other restaurants, though, I keep thinking of Hideaway as having a better salad than the one they serve, and I still think of Hideaway’s as being quite good in the larger scheme of things. 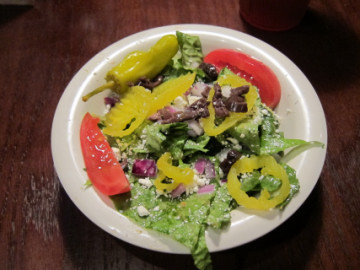 I will have to say that in contrast, though, the Greek Salad was disappointing to me with a dressing that was very tart, and a salad that seemed to be a little skimpy for the money you pay. 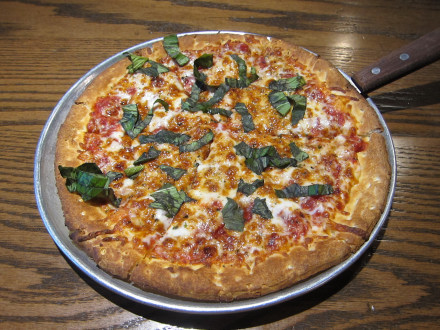 I do not think Hideaway is known for its vegetarian pizzas, and there is not a large selection, but the one I almost always crave is the Margherita Pizza. Like all the pizzas here, you get a choice of the size and crust you want, but otherwise it is very straightforward. The twist, though, is that they used to have two versions of the margherita, and one was taken off the menu while the other was modified. The new version has an olive oil and garlic glaze, but I ask for red sauce instead. What I many times forget (and forgot when I ordered the one pictured) is that you can also ask for sun dried tomatoes. This one had tomatoes but the waitress said the sauce had chunks of tomato which is what I saw. All of the versions I have tried have included fresh basil.

I am disappointed that the pizza no longer has fresh mozzarella as it did on the old menu, but it still has several good features. The basil and red sauce are very enjoyable, and when I can remember to order the sun-dried tomatoes I like these as well. The cheese is good (but not as good as before). I recently discovered that it has a parmesan herb shake in which oregano is one of the herbs (I think this enhances the flavor). I do not consider the crust to be the best in town but I still think it is one of the pluses of coming here. 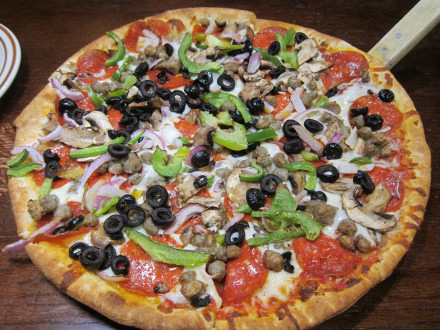 Most of the “Specialty Pizzas” differ only in the toppings they include, although a few have a sauce other than the red sauce. The ATW (which stands for Around the World) is probably appropriately named because it is mostly people in other parts of the world that eat as many vegetables as are included here. In addition to this it has pepperoni and sausage (two of my favorite meat toppings), and all around I think this is a good choice. 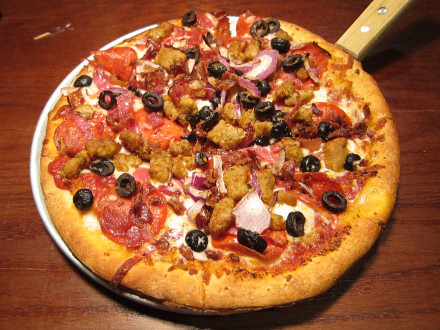 The Capone is a meat pizza that has enough vegetables (mainly black olives) to give it an interesting flavor. This is a meat lover’s pie, though, with Italian sausage, pepperoni, Genoa salami, and smoked bacon. The pizza pictured here was rather skimpy with the red sauce, but they gave me some extra sauce on the side which I think made it better (not that it really needed a lot of improvement). 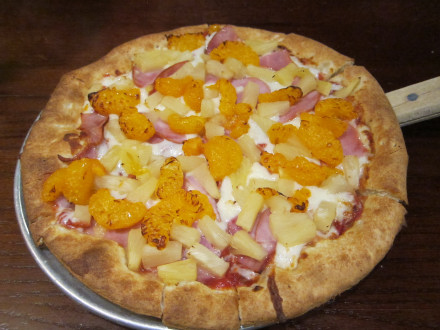 The Maui Magic includes red sauce, Canadian bacon, pineapple, and Mandarin orange slices. I would say the best part of this is the bacon (and of course the red sauce). The rest of it is really too non-traditional for my taste in pizzas. 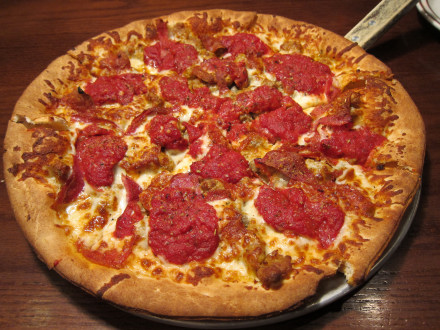 The Sicilian was lacking any vegetables, but I thought the meats were very good (sausage, Italian sausage, pepperoni, and Genoa salami. 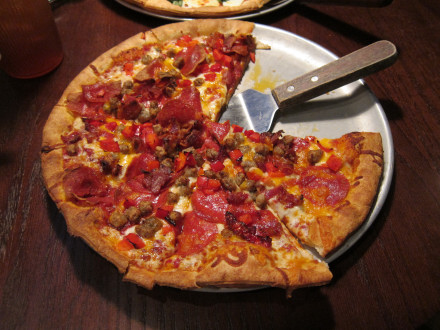 The Boz” is a good example of how satisfying the meat pizzas can be at Hideaway. Named for University of Oklahoma football star Brian Bosworth, I suppose it is natural for this pizza to be loaded with different types of meat. The amount of bacon, pepperoni, and sausage they pile on this pizza may in fact have led to a pork shortage contributing to Divine Swine’s going out of business (OK, I admit this may be a stretch, but this pizza does have a lot of meat!). I liked it quite a bit, and I also liked the fact that the flavor of the red sauce came through to supply a contrast to the meat. I made a note that some thought had gone into the flavor combination of this pizza because it seemed to be one that worked very well. The one I tried was without the jalapeno (I think I was the only one at the table who would have wanted to include it). Even without this additional flavor, though, it was still good. 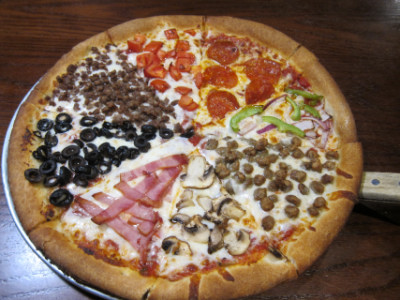 The Hideaway Special gives you eight pizzas in one, with each slice being a different flavor (I think you get ten if you order the large pizza). The problem, though, is that most of the slices had a plain and one-dimensional flavor to me, and I think most of them come from the “Build Your Own” section of the menu where you just get cheese, sauce, and whatever topping you choose. I would definitely suggest getting a “Specialty Pizza” instead, where the combination of ingredients have been thoroughly taste tested.

More About the Pizza
There is a choice of crust with all pizzas–hand tossed (thick), thin crust, or cracker crust. I prefer the thin crust, but the others seem like good options also. A waitress told me that the thin crust has more sugar than the hand tossed (I think so it will cook better). The cracker crust is the original one used in the Stillwater restaurant, but the one I tried at Hideaway on Northwest Expressway was my least favorite out of the three, thus I have not tried it here. Note that the cracker crust is gluten free and they charge extra for it.

I have enjoyed some of the pizzas that did not have red sauce, but my favorite pizzas are all ones that have the sauce. I think the two best features of Hideaway are the toppings and the sauce.

Other Comments
One of the down sides of the menu is that I find a lot of combinations that I just do not want to order. For instance, the Sicilian would probably be better with vegetables. Many other pizzas have three or four good meat toppings but one or two that I either dislike or do not want on a pizza. I think you can always ask them to omit a topping you do not want but the pizza will still cost the same.

The “build your own” pizzas have been impractical for me because the cost of the toppings is quite a bit higher than if you get the same number of ingredients on one of the specialty pizzas. As long as there are specialty pizzas on the menu that more or less fit my taste craving this is what I will continue to order.

I also think the salad here is very worthwhile, and this is not the case at most other pizza restaurants (although several restaurants have a worthwhile salad if I drop the adjective “very” from it).

The iced tea here is also one of my favorites in the city.

I recently discovered that they have a very good deal at lunch–you get the same food that is on the dinner menu at a discounted price (on my most recent visit the pizza had a $3 discount and the salad was $1 off. 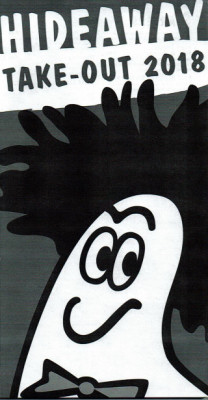 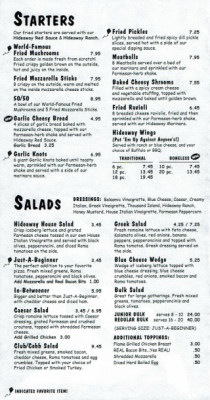 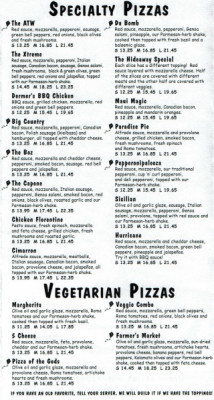 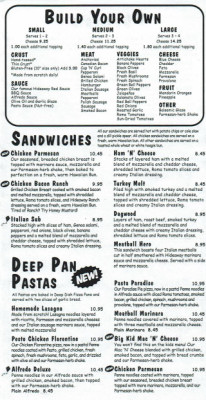 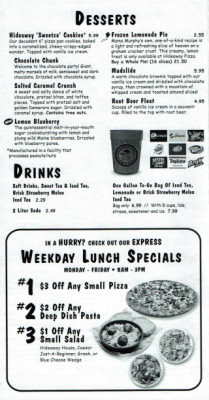