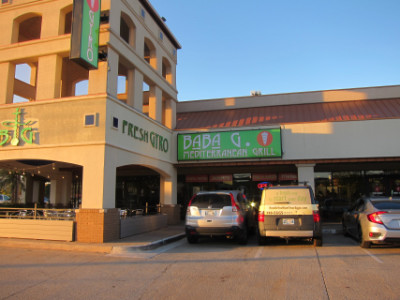 It is interesting that Oklahoma City has enough Middle Eastern restaurants that I can not only rate and compare them to each other, but I can also develop lists of individual items with appropriate rankings from one restaurant to the next. On just about any list Baba G comes out very high, and it may actually be the highest if I developed a more subjective list of “bang for the buck.”

This really gets to my feeling about Baba G–for most things it is not the best in the city but it is near the top with prices that are enough lower than other restaurants to make it quite attractive. I also like the way the food is prepared here–even if it is different than my long time favorites it is in a way that I enjoy the variety more than I think one is better than the other.

Baba G is a fast food style restaurant (their web site says it serves “authentic street foods from the Mediterranean”). The tables are spartan and you pick up the food at the counter. Orders can just as easily be taken home as eaten in the restaurant. I think this arrangement is the main reason the prices are a little lower than other restaurants.

The basic menu items here are plates, a pita sandwich, or a salad. Side orders are available a la carte, but are less expensive if you order a plate and then get them as a side item (I think they also may be different sizes). The menu is not huge but it covers all the basics of Lebanese style Middle Eastern food. 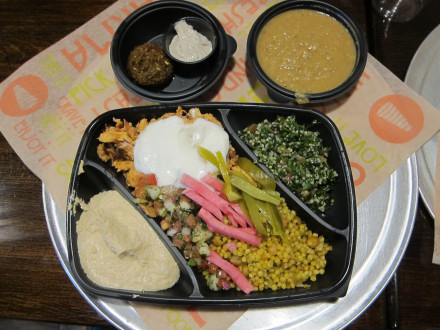 The Chicken Shawarma plate is an example of the plates here–all come with two side items and a choice of grain (in this case cous cous). I ordered two extra side items (falafel and lentil soup), and had a meal that was large enough to feed two people. The chicken was excellent, although for any other restaurant where I have written such statements as “this is the best in the city,” these statements are still valid. 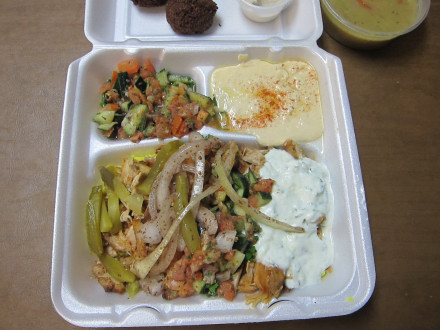 On a return visit I made a few changes, getting the Chicken Shawarma on rice instead of cous cous, and getting Arabic salad instead of tabouleh. I should make note of the fact that the Arabic salad and hummus were included on the plate, while I paid extra for the falafel and lentil soup. I was pleased by how little I had to pay for the “extras.”

I do not really have an opinion about the rice vs. cous cous–both were good.

The falafel had a good flavor and was non-greasy (I was more impressed with it on my second order, but I liked it both times).

Side Dishes
Most of the side dishes were very impressive. In fact, I thought that together they were the highlight of the meal (although if I were recommending a single item to order I would still say the chicken shawarma).

The tabouleh was very interesting because it left a mint aftertaste in my mouth that was an aspect of the meal I really enjoyed.

The Arabic salad had a particularly good dressing (but I would probably say the tabouleh is a better choice for a side dish).

The lentil soup had somewhat of a bland flavor the first time I tried it but I thought it was much better the second time (on the takeout order).

Drinks
They do not serve hot tea, but only have iced tea and sodas. This does not really detract from the food, but might affect how many times I go to the restaurant (I will also take into account the fact that the food is easily transportable and I can serve it with hot tea at my own house).

Additional Information
The web site’s information that this is “street food” is really the key to its popularity and success. It gives you very good Middle Eastern food at lower prices because you are not paying for the ambiance–just the food.

Baba G had opened a location in Edmond, but it is now closed. As of October 2020 the Memorial Road location is open for dine-in service.

Cuisine: Middle Eastern
Cost: $$
Hours: Open Daily
Accessible: Yes (parking spaces are on the east side of the building in front of Pei Wei)
Smoking: No smoking
Alcohol: No