Upper Crust is a chain of pizza restaurants with locations in Oklahoma City (at the Classen Curve), Edmond, and Tulsa. I think Google Maps is trying to be cute when it describes the Edmond location as being “Napa Valley – style” because the web site describes it as being New York-style. This sets a certain standard for people who are familiar with New York which includes a soft crust that you can fold. I have not been to New York but I have had other New York style pizzas, and I really thought that Upper Crust may be the best of this style I have tried.

This restaurant, like many nowadays, appears to be surviving through its takeout and delivery services. I participated in this in order to experience a pizza that I may not otherwise have a chance to try. The pizza arrived fresh and I feel that I really got the full Upper Crust experience. The bottom line is that I was certainly happy enough that I would do it again.

Even though I did not go on site to the restaurant this time, I know the area. It is located in a rapidly growing section of Oklahoma City located west of Edmond and which people call “Edmond” because the area is served by the Edmond Post Office (and I think also the Edmond schools). West of here is Deer Creek, although much of Deer Creek is also in the Oklahoma City city limits.

I do not worry much about Upper Crust being a “chain.” It seems to operate by the principle of making everything fresh. It is definitely on my “favorite” list. 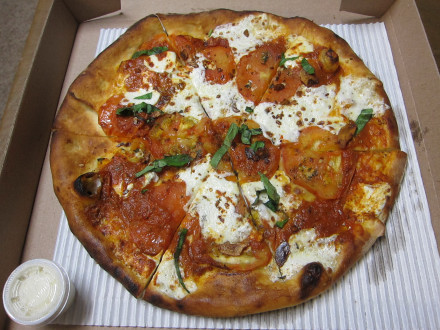 I do not know a lot about the Margherita Pizza other than what it says on the menu. One feature listed is that it has “fresh mozzarella,” something that I believe I have only experienced at one other restaurant which happened to be in El Paso. I will definitely be paying close attention to other restaurants’ menus because this type of cheese is something that makes a huge difference and which has a much better flavor.

The pizza has a soft New York style crust, something which does not really matter to me. The crust has a good flavor, but I thought the outstanding features of the pizza were the sauce and the cheese. There was not a lot of basil but it had a good flavor (and it was a plus for the pizza). The tomato was ripe and flavorful.

There are several other signature pies on the menu that also look interesting (signature pies come in a 12 inch and 7 inch size, but the smaller ones are not available for delivery).

Build Your Own Pie
Upper Crust follows just about every other pizza restaurant’s pattern by also offering a build-your-own pizza. My philosophy is to use the build-your-own option when I think I can make a better pizza than the restaurant does, but it does seem that Upper Crust knows what they are doing with the signature pies.

Other Dishes
A few oven dishes, sandwiches, and large salads are also available. They have a kid’s menu, and some special drinks. There are only two desserts listed on the menu, and I am not sure that dessert is a big thing at Upper Crust. 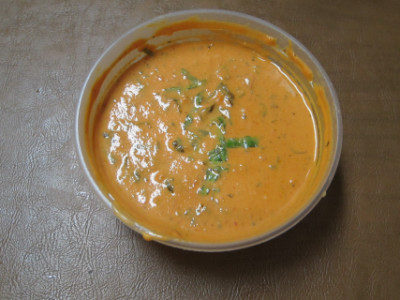 The Tomato Basil Soup was the best one I tried in Oklahoma City until I tried the one at Primo’s. Still, though, it was thick, rich, flavorful, and very good.

In a Nutshell
The fact that this is wood fired pizza and that they use fresh mozzarella puts this at the top of the class for pizza in Oklahoma City as far as I am concerned. I am always looking for the elusive authentic Neapolitan style pizza, but I am not sure that even that would be much better than what you can get at Upper Crust.

There are always tweaks that people can do with pizza to make it better than somebody else’s, and for me it is probably that I usually like crispy crust rather than a soft one as it is done here. Still, I think it is hard to find a pizza better than the one served here.