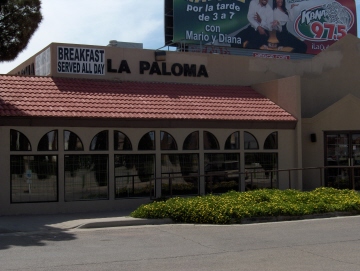 Update Mar. 2016:  La Paloma was one of my favorite restaurants in El Paso, but when I moved away from the neighborhood I did not make it there very frequently.  The “No. 1” La Paloma was in the area of town known as South El Paso, where you generally find the most authentic border style Mexican food (but it’s usually very inexpensive and not what you would call “gourmet”).  Still, the restaurant had several very good dishes, and was known for its flour tortillas.

The second location, on Dyer Street in northeast El Paso, charged higher prices but I think they increased the quality of the food.  The first restaurant on Dyer was a small place that I remember from the 1970’s (or possibly before), and the building shown in the photo was the “new” restaurant (which was definitely much nicer).

The La Paloma Special was my favorite dish in the early days, mostly because they had one of the best versions of chile con queso in the city.  Later the Chicken Mole because my favorite dish, and I never could really believe it was made from a mix even though the owner told me this was the case.

Looking back, I could make a good case for giving it a higher rating than is shown in the review.  Although not many dishes here were among the best in the city, La Paloma’s standouts were among my favorites of all time, and these might have been given more weight in figuring an overall score.

La Paloma No. 1 was a small hole-in-the-wall restaurant in South El Paso known for its chile con queso hamburger steak (La Paloma Special) and greasy french fries. Some family members went out Dyer Street to what was then the edge of town to open No. 2 with just about the same food and the same 1950’s-era diner decor. No. 2, though, improved on the food and charged higher prices, being in “prosperous” Northeast El Paso.

Today La Paloma No. 1 is closed and No. 2 has built a much larger and more modern facility. The food is just as good as ever, and I think it is actually better. The La Paloma Special has always been one of the specialties of the house. The hamburger steak is about the same as the ones found at any restaurant, but the chile con queso poured on top is one of the best I’ve experienced.

Although La Paloma has never claimed that their Chicken Mole is a specialty, I have always thought it is one of the best. I do not think it is authentic, and the owner admits it is made from a mix, but it has a good strong flavor and texture that I like. The chicken is not exclusively white meat, but there are substantial chunks of it.

The Red Enchiladas are quite good–with a deep red chile that is similar to New Mexico style, they are some of my favorites in El Paso. Although the heat index overall is about standard for El Paso, the red enchiladas are close to a 5.

The real standout item here is the complimentary Flour Tortilla served with every dinner–it goes great with refried beans and chicken mole.

The Pico de Gallo served with the chips is one of the best anywhere.

La Paloma was one of my favorite neighborhood restaurants when I lived in northeast El Paso, and it continues to be one of the best in the city.