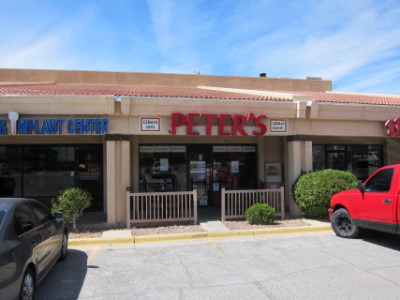 The owner of Peter’s (whose name you can guess) was formerly a baker at Lo Mart Supermarket, a grocery store that had a large selection of German baked goods and other items imported from Europe (and is a store I have missed since it closed). Fortunately, though, Peter’s German Grill and Bakery goes a long way in filling the void, except for the fact that Lo Mart used to be on both the west and east side while there is only one Peter (who is located on the west side on Shadow Mountain Dr.).

Peter operates a German restaurant that mainly serves bratwurst and schnitzel, although I know that some other items are available as well (the web site lists two other types of Wurst). Side dishes are available, and there are daily specials Monday through Saturday. Most of what I have tried so far has been because it was the daily special.

The bakery is similar to Marina’s Bakery on the east side, except here there is a greater selection of breads while Marina’s mostly serves pastries. Each of these bakeries gives you a good selection of both, though.

Peter kept telling me that Friday night is the beer special night (I think it is half price) but I have yet to check it out. So far, though, I have found more than enough to keep me interested in coming back. 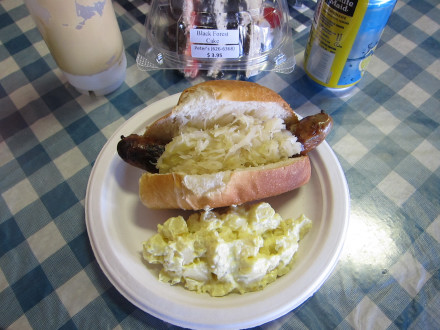 Bratwurst is one of the specialties of the restaurant, and it is obvious that Peter takes care in finding a good source and in cooking it the right way. The one here is grilled, resulting in an excellent flavor of an already good sausage. Sauerkraut is served on top (onions are also available), and all around it is excellent.

After several visits I have come to the conclusion that the Sauerkraut is one of the things I appreciate most about the food here, and that this is one of the best versions I have found anywhere. The two things that are important for a good sauerkraut are freshness and flavor, and Peter has both of them nailed.

A very good Potato Salad is served as part of the daily special deal on Wednesday, or you can order it separately any time (including Monday when the bratwurst sandwich is half price). The potato salad is served cold. I have been told that it is prepared in house daily, and this is evident by its freshness.

Peter has several types of mustard which you can try out to your heart’s content, but the one I have found to be the best is the coarse mustard. Marina’s Bakery is the place in town that I think has the best German mustard, and I really like their bratwurst better overall except perhaps for the sauerkraut (I haven’t had Marina’s in a while and I am really impressed with the sauerkraut at Peter’s). 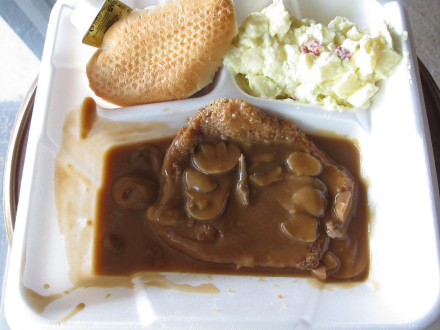 Jagerschnitzel is one of the variations of schnitzel served here, and the mushroom gravy covering the meat lived up to my expectations (as did the meat). 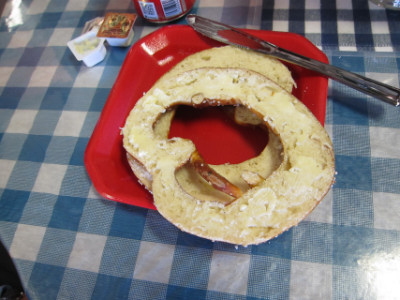 One feature at Peter’s is that they have German style Pretzels made with rye, covered with rock salt, and served with butter. Like all of the bread it is fresh and baked in house. 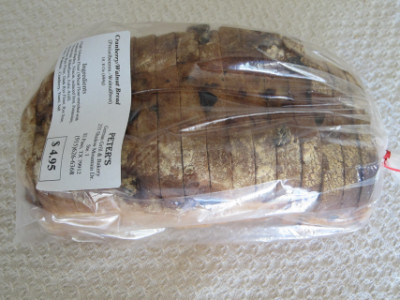 After trying the Cranberry and Walnut Bread I have made it a point to buy more every time I go back. This is one of my favorite things to eat at home for snacks or as part of breakfast–the sweetness is just right but it is not to the point that you will get a sugar high from it.

For those who like bread with fruit and nuts, I would honestly say I have tried quite a few of them and this one, along with the cranberry and walnut at Whole Foods (and a similar bread at Bella Cora) are the best. My favorite of all of them, though, is Peter’s. 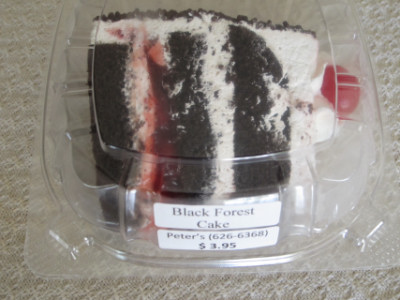 The Black Forest has a very nice cherry filling with a liqueur flavor along with a very fresh cake and European style (not too sweet) cream topping. This is definitely one of the best I have tried (I would say probably the best).

I should mention that Peter has quite a few other desserts, but I am so stuck on the Black Forest that this is the one I like to buy.

Drinks
There is a large variety of specialty drinks in the cooler (I think many are from Europe) that include some I have tried and would recommend. The drink I usually buy is the canned pink lemonade (I think it is by Minute Maid).

Peter does not have a drink fountain (Coke, etc.) and does not serve iced tea. Beer is available, though.

Other Comments
This is a German deli with a very impressive selection of schnitzel and wurst, but overall the menu is not as extensive as would be found in most German restaurants. The quality of the food at Peter’s is very good, and of course there are other perks such as the pastries.

The daily special on Wednesday is especially good if you go with a friend. You get two bratwurst sandwiches with a side dish (such as potato salad), two drinks, and two desserts for the current price of $20 (I figure when you add up the prices of everything if it were purchased individually, the desserts are almost free). All of the daily specials seem to be good deals, though, and all of them are for one person except on Wednesday.

In addition to being a restaurant and a bakery, this is also quite a good store for German and European foods (and I think Peter expanded it in 2019). I do not think the selection is like it was at the old Lo Mart, but it is getting very close.