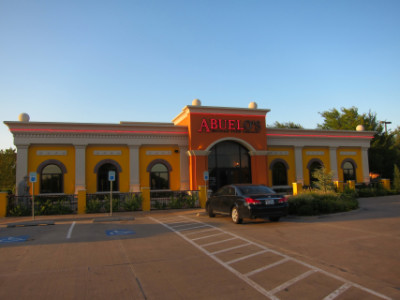 Update May 2020: This review was written in 2016. I made another visit in 2017 and ordered enchiladas with New Mexico style green chile (which was excellent). I returned in 2020 and found that all of the things I had considered ordering had been taken off the menu (including the New Mexico green chile) because of the pandemic. The staff was down to a much smaller level than before, and I assume the same was true in the kitchen and in their supply chain of getting food to the restaurant. I think it has largely gone back to the bland chain food I found in the early days, although with some better things on the menu than they had originally. If I return I will try to give an updated review, but right now that is a big “if” considering what they have dropped from the menu. Right now I have updated the rating to reflect how I think it is currently. I do not know if they will ultimately be able to bring back a larger staff and serve the type of food they had in 2016. Some of the comments in this review might still be valid, but I would say that they have changed things quite a bit as a result of having to close for a while and then try to reopen the best they could.

Abuelo’s is now a chain with restaurants in several states (and two in OKC), but I first knew it as a local restaurant in Lubbock, Texas. I was not very impressed with its style of Tex-Mex food, nor did my opinion change when I first ate at the Oklahoma City restaurant in 2003.

Things changed pretty radically, though, when I returned in 2015. I had seen some reviews of the Lubbock restaurant in Texas Monthly that gave me an idea that Abuelo’s had in fact changed for the better. I discovered later that it actually changed before 2003, but I was still focusing on their “old standbys” when I went there at that time.

The interior of the Memorial Road Abuelo’s had a major transformation between 2003 and 2015, and I now find it to be one of the most comfortable dining rooms in the city (they have an abundance of booths, which is normally where I like to sit). The restaurant is not too loud (probably because it has a high ceiling), and along with the service I have gotten I consider this an excellent place to come.

My experiences previously in Lubbock and in 2003 at this location made me reluctant to ever come back (plus, you are eating chain restaurant food). The bland Tex-Mex style of food I had at previous times may still exist, but it is not the way I would describe what I have tasted on recent visits (and this includes some of their Tex-Mex items). 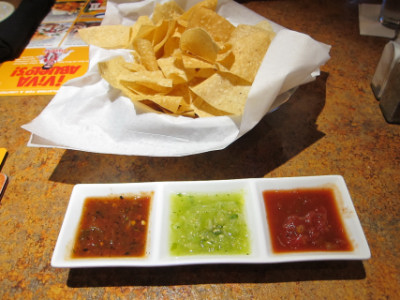 Chips with three types of salsa

The Salsa seems to be one area where the restaurant has improved in recent years. Three types of salsa are served, ranging from spicy to decidedly non-spicy (all were good, but the mild green salsa was not very exciting). The Chips were good, and they provided free refills of both chips and salsa. 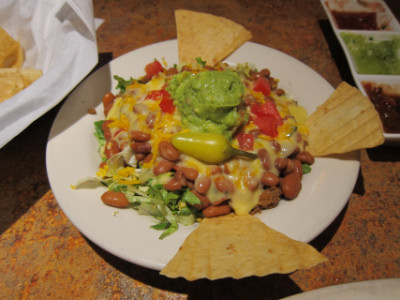 Some of the salads on the menu are actually a meal, such as the Lighter Reynosa Salad from the appetizer menu or its larger counterpart. I had a taste of it, and it proved to be fresh and flavorful (not a description I ascribe to many Mexican salads in Oklahoma City). To me the melted yellow cheese confirms that it is actually a main dish and not a salad, but it could really go either way. 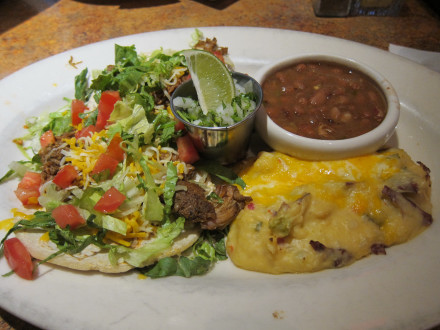 Some Texas Monthly reviews persuaded me to try Abuelo’s after a long hiatus, and one dish they recommended was the Carnitas Tacos. This turned out to be quite a good pick, with a flavorful Mexican style citrus taste. These reminded me of the tacos al pastor at Abel’s (and other places), but I would say with not quite as good of a flavor for the meat. This is just because of my preference for the pastor meat, while carnitas remind me somewhat of a pork roast (when you really want a heavy meat dinner). 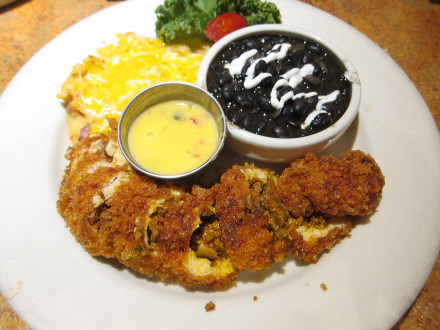 The Chicken Medallions were an item I had seen recommended by some diners at the Lubbock restaurant, and this was another dish which demonstrated how Abuelo’s has improved on its original Tex-Mex menu. This photo demonstrates that it has a number of components, with the flaky crust around the chicken probably being the most noticeable. I thought the cheese sauce enhanced the dish, and the potatoes and black beans were both very good (although maybe not the top ones I have had in OKC). I think that authentic Mexican dishes are not characterized by this much cheese, but it was enjoyable (and may even be described as an upscale Tex-Mex dish). 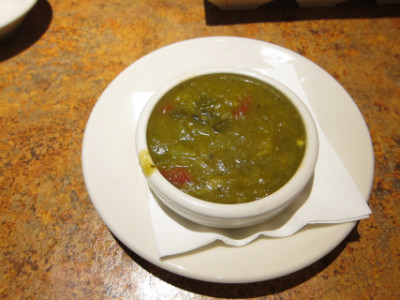 Another tip I had seen about Abuelo’s was that they are now serving some New Mexico style dishes, with red and green sauce. The stacked enchiladas I ordered in 2003 came with red sauce which may have been Tex-Mex or Arizona style, but definitely were not representative of New Mexico. Although I did not want to take a chance on ordering these enchiladas again, the waiter on one visit offered to bring a sample of the New Mexico Style Green Sauce, which I was immediately able to determine was representative of New Mexico chile. Thus I am now unsure whether the New Mexico style dishes are some of their new menu items or whether they have to be special ordered, but at least I know that they are available.

Tex-Mex Food
The only true Tex-Mex item I have tried recently was the Spinach Enchiladas (I just had a sample of them and I didn’t take a photograph). Surprisingly to me, though, they were quite good (I would say better than the chicken medallions but maybe not as good as some other dishes I have eaten). They came with a cream sauce which was not bad, although not at all spicy. I do think that spinach enchiladas are one of the better inventions in the Tex-Mex food category. 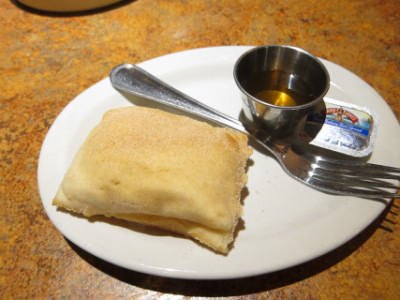 Sopapillas cost extra, and were also much better than most of the ones I get for free at other restaurants. This was probably a one time experience, though, because I am usually plenty full from the meal and have little desire for a dessert.

Some Other Notes
Abuelo’s still seems to have its share of forgettable Tex-Mex dishes (this was the only type of food I experienced when I ate at the Lubbock restaurant during the 1990’s and earlier). One key to breaking out of this mold was in reading the Texas Monthly reviews, and I think they were quite on the mark in their recommendations.

The other very helpful factor, though, has been the wait staff at the Memorial Road location, who gave very good recommendations based on what I told them I wanted. Thus it is really not necessary to read the reviews of Abuelo’s (even mine!). Just go, and I think they will help you find the right items. 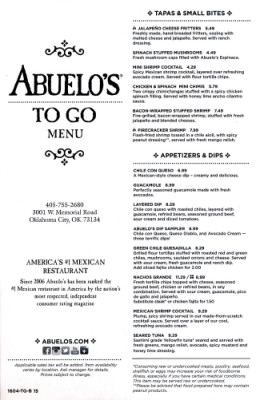 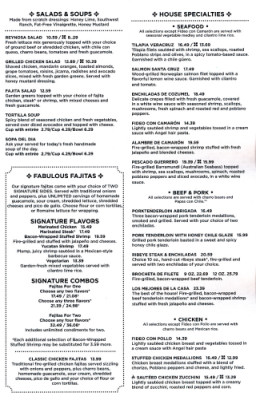 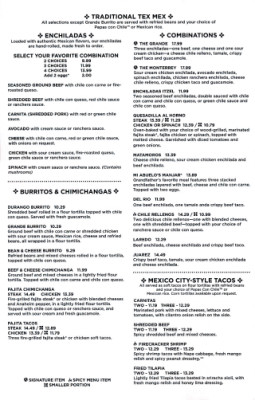 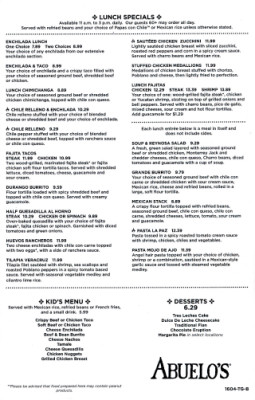