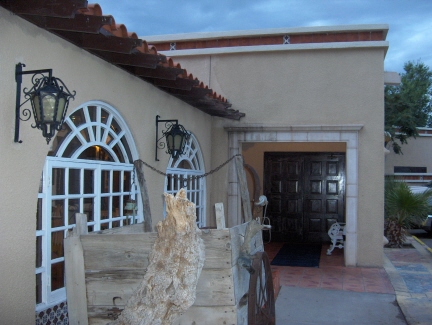 The one thing that has always been notable about Forti’s is that I believe it has the best red enchiladas in town. It would be one of my most frequent destinations except for two things: (1) the cooks here are inconsistent–they are usually good but sometimes fall quite a bit short, and (2) some other restaurants have enchiladas that are so close to the ones at Forti’s it may not worth traveling the extra time or (usually) spending the extra money to eat at Forti’s. But when the cooks deliver the product that I believe conforms to Forti’s original recipe, to me this is the closest to enchilada perfection that can be found in El Paso. The other food here is quite good as well, but it is the enchilada that I would proclaim is probably the best in the city. 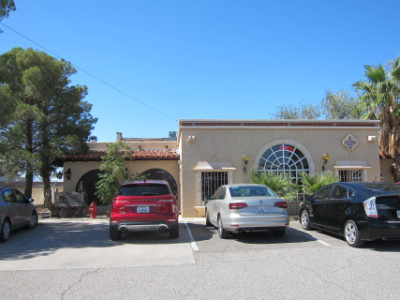 The front view of Forti’s

Forti’s Mexican Elder is one of the oldest and most well-known representatives of El Paso style Mexican food, and is probably as popular with tourists as with local residents. Forti’s has traditionally been one of the more expensive Mexican restaurants in town, but I have found the flavor to be top notch on many, if not almost all, of the items. 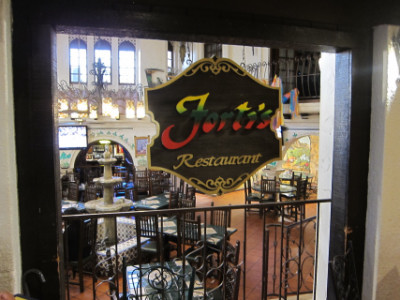 View of the inside courtyard from the front dining area

Its popularity, though, is probably the source of its inconsistency. I think its hours require having multiple cooks, and the number of years it has been operating would necessitate having some turnover since its founding. I would not normally pay this much attention to differences in the food from one visit to the next, but when I consider this to be the best enchilada in the city then I notice the differences. This is natural at any restaurant, and the owner cannot be doing all the cooking, but I am just noting that I think the inconsistency in the food has been the restaurant’s biggest problem over the years. I can say the same thing about L&J and other very good restaurants, just for perspective.

When I first went to Forti’s it was pretty much a neighborhood restaurant that was becoming more well known throughout the city. The building is quite large, and has been expanded significantly from its original size. It now resembles a hacienda with three levels inside and an outdoor patio. This is not quite the same type of tourist destination that can be found in Mesilla or Santa Fe, New Mexico, but the Mexican-looking interior is very pleasant for a leisurely meal. 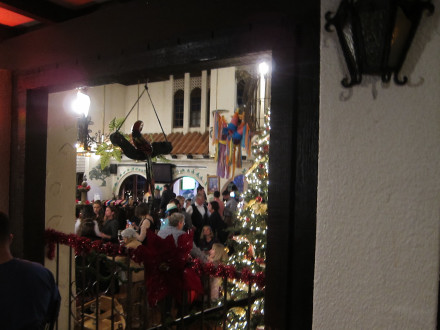 The inside courtyard is able to host large parties, or it is used as a regular dining area when the restaurant is busy. There is sometimes a live mariachi band, and the restaurant knows people want a good time and good ambiance almost as much as good food. The entire area is non-smoking as regulated by city ordinance. Forti’s has a full bar. 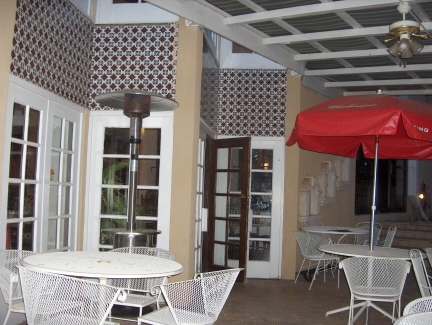 The outdoor patio provides overflow space, in case the 250 person capacity of the restaurant is not enough. I have availed myself of this opportunity when the weather was right, and at the time it was the designated smoking area (but I do not believe this is the case any more).

For a while Forti’s had a branch at the El Paso International Airport, and was always on my family’s agenda while waiting for departures until the airport changed the food service contract. Now there is only one location, although it is not too distant from the airport.

An on-line menu I saw explained that Consuelo Forti’s grandmother supplied the recipes that she and her husband used in the menu, and that they have added a few items over the years. I have classified the food here as “El Paso” style, referring primarily to the enchiladas which have a unique local flavor, and which are served in restaurants throughout El Paso but which I have otherwise seen in only a few surrounding towns (as far east as Van Horn). I am sticking to this description because even though the original recipes came from Mexico, the El Paso style food is a mixture of Mexican recipes and local ingredients (the local markets stocked chiles from Mexico and local ones, but the Mexican chiles may not always be the same ones that were sold in the regions of Mexico where the recipes originated). Also I have long believed that Forti’s made the best version of El Paso style red enchiladas, so however one wants to classify the enchiladas, Forti’s is my model of how they should taste.

Forti’s menu has a list of “specialties,” and I believe these represent the recipes from Consuelo’s grandmother. One item from this section is the tampiqueña steak, but I do not have a list of all of them. However, I have noticed that the specialties seem to be a notch above many of the other items in terms of flavor and quality. 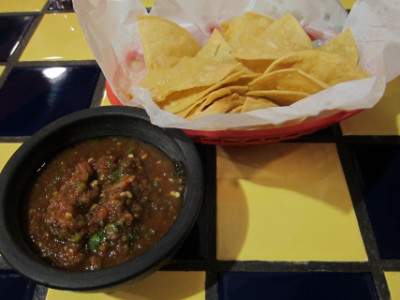 The chips and salsa used to be a source of irritation to me since I thought the salsa was “dumbed down” for tourists. Recently, though, it has been quite good with a distinct freshly made taste. The chips likewise are some of the best I can find in the city. Forti’s has risen quite a bit in my estimation, not because of better dishes that are served, but through the elimination of the weak points that I experienced in the past. 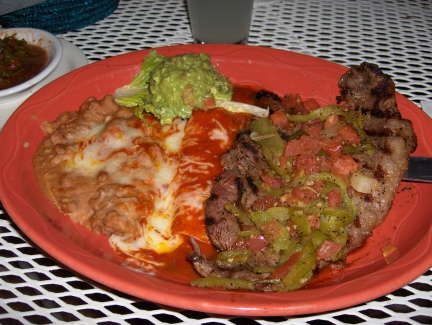 Tampiqueña steak with a red enchilada and guacamole

Tampiqueña Steak from the “Specialties” menu is not only one of the better items served in the restaurant, but it may be one of the better ones in El Paso (although I am much more familiar with the various chicken tampiqueña dishes than the ones served with steak). One experience I had that was comparable was at Great American Land & Cattle Company (beef with an optional green chile topping). I would say Great American probably has better steak. Forti’s, though, served a great combination of steak with green chile, and this green chile was some of the best I have had in El Paso. On the “spice scale” it was probably about three-quarters of the way to the top, but if it is too spicy for some people they can cut off small pieces so that it will be diluted more by the meat and the tomato topping. This was one of the best single dishes I have had in El Paso Mexican restaurants.

One note about the steak at Forti’s is that you can get a choice of sirloin or arrachera (arrachera is considered to be a better cut). I think the one I ordered was sirloin, and I think the arrachera would make Forti’s steak even more competitive with the ones from other restaurants.

The Red Enchilada that came with the tampiqueña was also among the best in El Paso, but that is something I have known for a long time, having ordered quite a few of the combination lunches and dinners. These have a rich red chile and a flavor that rivals many of the ones found in New Mexico. I think the tampiqueña is the only “specialty” dish that includes an enchilada.

The Guacamole looked very appetizing, but was lacking in flavor compared to many that are served around Ysleta and the general area south of Interstate 10. In fact, I thought the guacamole at Ted’s Cafe Escondido in Oklahoma city was better in terms of flavor (this is not a plug for Ted’s, but is noting that great things can sometimes be found in unexpected places).

The Beans served with nearly all plates are of excellent quality and are one of the few examples that enhance a meal rather than serving as a filler. 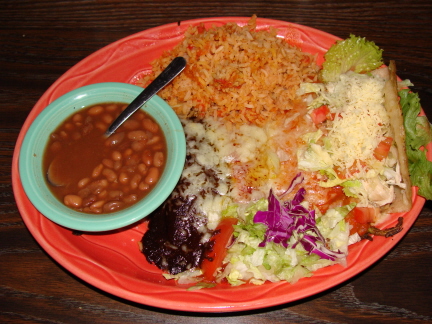 The combination plate comes with standard border Mexican food items, and substitutions are allowed. Even though the combination plate at Forti’s has traditionally been one of the most expensive in town, it is certainly worth sampling some of the best food the borderland has to offer.

Mole Enchiladas do not normally come on the combination plate, but they can be ordered as a substitution. In years past I thought of them as having an absolutely wonderful rich flavor (with a chocolate component). On a later experience I thought they were somewhat unbalanced. This is one of several items that has been inconsistent on different visits, although I do see a pattern to this (as I will explain at the end of the article).

I have also tried the whole beans instead of refried beans, but I am not sure I have an opinion about which one is best (this is a tribute to the refried beans).

The Chile Relleno (not shown in the photo) was just a little better than average on most of my visits. This is an example of inconsistency turned around–it has lately been one of my favorite items.

The Chicken Taco (shown in the photo) was very good. The Mexican style white cheese was one of its strong points.

The Rice is also a very strong point at Forti’s, while it mostly serves as a filler at many restaurants. 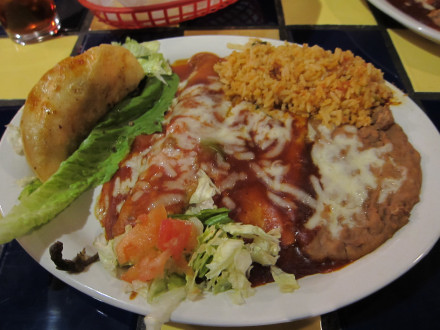 The Combination Plate Number 3 on the 2021 menu includes a taco, chile relleno, tamal, red enchilada, rice, and beans. The Beef Taco is not one of my favorites in the city, but everything else seemed to be among the best anywhere. They allow substitutions, however, so I rarely get all of these items but opt for two enchiladas instead. The only problem with the combination plate is that the enchiladas do not have a lot of sauce, and I think they would be better on something I have seen but haven’t ordered–the enchilada plate.

One thing I have noted about the red enchiladas here is that there is not even a hint of cumin flavor–just the red chile in all its glory along with whatever spices enhance its flavor rather than change it.

Drinks
Forti’s serves fresh squeezed Lemonade that is a good example of this Mexican style drink. The bar also seems to be quite popular.

Additional Notes
Even though I have found inconsistencies in the food, the restaurant has always tried to correct them (such as the one time my food came out cold and they reheated it). Most of the time, though, I get the best enchiladas in town and some of the best examples of the other items they serve.

I personally think the restaurant puts its best cooks on shift at its busiest times (which lately has been at lunch). Most of the times I have had problems with the food has been when the restaurant has had few customers.

Another point is that the “Specialties” section of the menu seems to be where you truly get some of the best items, and it is not just the hype some restaurants use to charge more money for certain dishes. I believe these are the items that are made from the recipes of Consuelo Forti’s grandmother, and like the tampiqueña, are likely to be some of the best you can find anywhere. (I just would say that those who love red enchiladas should try at least one here even if they have to order it a la carte).

As of my visit in October 2021 the restaurant no longer has lunch specials and there may be other changes from their previous menu that have been implemented. At this point I am just happy for any of El Paso’s classic restaurants that are still in business, and where the food still tastes like it did in the past.