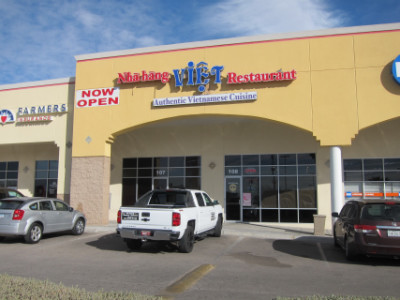 When I visited Viet Restaurant for the first time I had not realized it was recognized by Texas Monthly as one of the best new restaurants in the state. Instead, I just knew that it had good reviews and I wanted to try one of the few choices in town for this delicious cuisine.

I was confused at first about the name–it went by both “Viet” and “Nhà Hàng Viet,” but the owner told me the longer name was simply the Vietnamese translation of “Viet Restaurant.” Many people seem to love Vietnamese food as much as I do, as evidenced by the fact that the cuisine seems to be almost as common as Chinese food throughout the United States. Like Chinese food, there is a form of Americanization happening with Vietnamese cuisine, although to me it seems that the standard dishes served in most Vietnamese restaurants retain the true form of the authentic cuisine much more than was the case with truly Americanized Chinese dishes such as General Tso’s chicken, sweet and sour pork, broccoli beef, etc. at Chinese restaurants.

Unlike Chinese food, Vietnamese restaurants generally prepare the same dishes the same way everywhere, and the “Americanization” factor has mostly to do with which dishes are available and whether the local population will support the restaurant offering some of the more exotic food available from Vietnam. Although El Paso is like most cities in mainly having the most common dishes available at the Vietnamese restaurants, Viet Restaurant’s menu is one of the most varied in the city, as well as (in my judgment) having an authentic presentation of the food in another way that many restaurants make it more “Americanized” without many people realizing it. The ingredients and flavors used are as important as the dishes themselves, and Viet does not cut corners here.

I do not go along completely with the idea that less authentic means less flavorful, but for some dishes such as pho and the vermicelli bowl, I generally want it as authentic as possible. 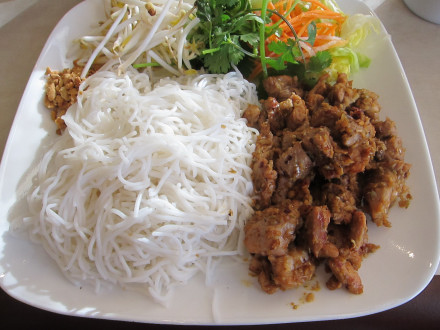 The standard vermicelli bowl is served at almost all Vietnamese restaurants, but in El Paso it seems that every restaurant serves it on a plate instead. This does not affect the flavor, but the way it is prepared and the ingredients used do vary from one restaurant to another. At Viet the Vermicelli with Lemongrass Chicken is the best I have tried in El Paso, and I have been able to use my favorite Vietnamese dish as a benchmark to compare the different restaurants. Viet Restaurant has good chicken with a very good flavor, and this is about all one can expect at any restaurant.

The advantage of a plate instead of a bowl for this dish is that you can add your own toppings as you desire instead of having them mixed together. I like to go easy on the bean sprouts so the plate works for me as long as all the “essentials” are included. Viet has the normal vegetables along with a good portion of peanuts, so this made me happy. What made me even more happy was the excellent flavor of the sauce and the lemongrass. Missing from the vegetables was cucumber, but there were enough carrots to give a good vegetable flavor. Overall I think they did an excellent job of making this delicious as well as authentic.

One ingredient missing here was mint, an item most American restaurants omit. I later talked to the owner who said they have mint and you can request it, but most customers do not like the flavor of the dish once the mint is added. If I were not familiar with the Oklahoma City Vietnamese restaurants I probably would not even know that this dish should have mint, but I am now spoiled and I wish I had known about the mint at Viet. The fact that they even have it at all puts this ahead of the other Vietnamese restaurants in town. I also know that Viet will customize the food to a certain extent if you request it (although the non-customized dishes here are really delicious enough that I think most people will be happy). 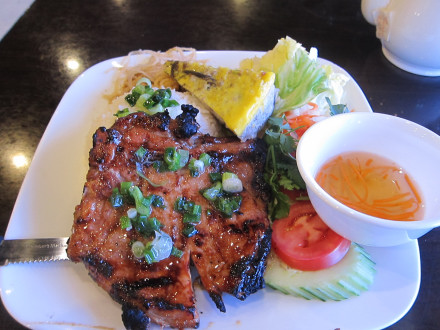 On a subsequent visit I ordered Steamed Rice with Pork Chop, Pork Skin Shredded, and Asian Ham. This is a dish that for sure is not the first thing Americans think about ordering, but while I was there I saw a man who looked to be Vietnamese make the same choice that I did. I think the pork skin is the pink colored food in the upper left corner, while the ham is yellow on the top and shaped like a piece of pie.

I had a very good version of this dish in Oklahoma City, which made me want to order it again. In fact you can get the pork chop alone (without the pork skin and ham) at several restaurants in El Paso including here, and this is definitely the most important part of the dish. Unfortunately, I was a little disappointed with this dish. The good part was the sauce, which I though was as good as at the other restaurants (Pho Tre Bien and Saigon Taste). The meat was very good also, but for me it was not cooked enough and definitely pink (not something I like very much with pork). The vegetables and fish sauce were good, and overall I liked it. I do not know if I should have sent it back to be cooked some more, and I think this was a mistake rather than the way the restaurant usually likes to cook it. In any case, I did not suffer any ill effects from it being undercooked (if, in fact, it was undercooked).

Tea
Although the restaurant gives you a tea bag instead of loose leaves or brewed tea, this is standard for El Paso and is becoming standard in other places such as Oklahoma City. They also have boba tea, which I have not tried.

An Assessment
Each of the “big three” Vietnamese restaurants has something I like better than at the others. At Pho Tre Bien it is the pork chop (and also their tea). At Saigon Taste it is the banh xeo (in fact I do not think the other restaurants even have this dish). Here it is the vermicelli with lemongrass chicken.

All three of these restaurants do a good job with the side vegetables (cucumber, etc.), fish sauce, and flavors of the food (or at least they have been good since they opened until the writing of this review). Viet Restaurant has a wide choice of menu items, and I feel that there are many more good ones that I have not yet found.

Most Recent Visit: May 26, 2022
Number of Visits: 2
Best Item: Vermicelli with Lemongrass Chicken