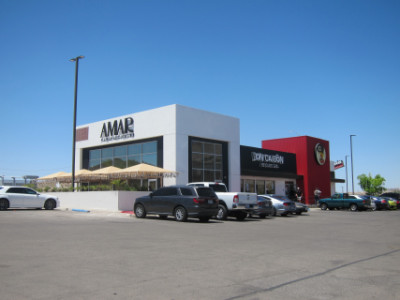 Amar Restaurant, next to Don Carbon in the Alberson’s complex

For El Paso a Peruvian restaurant is the kind of novelty I have been craving (an ethnic restaurant that serves something besides Mexican food). Shortly before my first (and second) visit in May 2022 Amar had been making waves as one of the most popular new restaurants in the city. The building was filled to capacity on both of my two initial visits with the outdoor patio being almost as popular, even on a day that I judged to be less than ideal in terms of the weather.

Amar is connected to the much larger Don Carbon by an inside door, leading me to the conclusion that the two restaurants either have the same owner or else they were connected by a business arrangement. I came to the conclusion they were trying Amar as an experiment to see if it would be embraced by the El Paso clientele, and that they never expected that it would be so successful so quickly. Since the Covid outbreak it seems that all of the new restaurants have been of diminished size compared to previous norms, and that the local people understand this and are willing to wait for a table or eat outdoors during El Paso’s version of inclement weather (which I think many other cities would be happy to have). In the case of Amar, I think word of mouth made this a place people just wanted to try.

I already had expectations about Peruvian food based on previous experience, and the fact that all of them had been good. The short answer to my analysis of Amar is that it is really good. I think they have nailed the flavors and essence of Peruvian cuisine.

For me the thing that keeps this from being something I would want to do often is the way things are packaged. For instance, many times I would have plantains and yuca served on dishes, and it often had brown rice or cilantro rice. Another thing I found at Amar was a somewhat limited menu, although I am not downgrading their rating for what they do not have when what they do have is quite good.

Another big factor for Amar, though, is the fact that seating is so limited. It can be very difficult to get anything other than a two-top table (not that I would normally need one but on one of my visits I did). I just think they did not know the restaurant would be this popular and probably the situation will be ameliorated at some point. 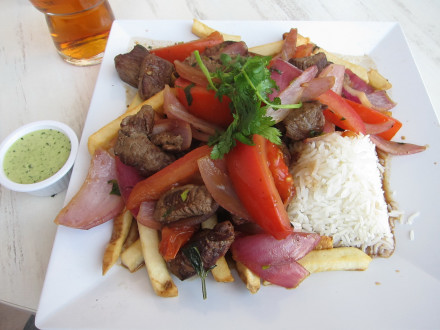 Amar’s Lomo Saltado is beef tenderloin sauteed with tomato, onions, cilantro, and served with french fries, jasmine rice, and huacatay sauce. This is a dish I had several times in Oklahoma, and it is one of the most popular items at every Peruvian restaurant I have visited. I like the idea of having the meat and vegetables mixed together so that I get a balanced meal without having to order side dishes. There is some variation on this dish with some of the restaurants, such as making it with chicken (for pollo saltado), and some also make it with soy sauce because of the influence Japanese and Chinese settlers had on South America’s west coast. I do not believe Amar’s has soy sauce, but this may be a reason the taste of the steak is very evident, and not competing with other flavors. “Chaufa” (Chinese style) dishes, though, are the ones where soy sauce and other Asian flavors are the most evident (Amar has one chaufa dish on the menu).

There were two details, though, that I thought might have made this a better dish. One was that some Peruvian restaurants serve plantain and/or yuca on the side (usually not a real serving, but just a small amount to get a taste of it). Another is that Amar serves the green huacatay sauce, but some restaurants also serve a yellow aji sauce (which I think goes particularly well with french fries). 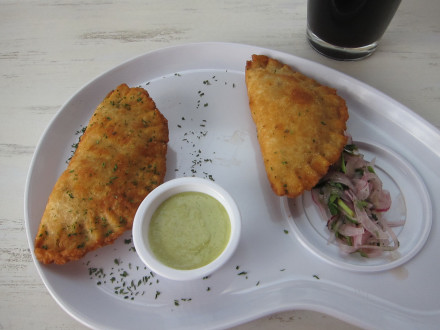 The Empanadas are very good but I found an order of two to be less than what I needed to be full. There are two types: shrimp and cheese or spinach and cheese. I like to have one of each (which they will do). On my order of one of each they brought me two shrimp empanadas, but were willing to correct it after I bit into the second empanada and found that it was not what I ordered. I would say if you do get two empanadas with the same stuffing the shrimp is a good choice simply because it is more filling. 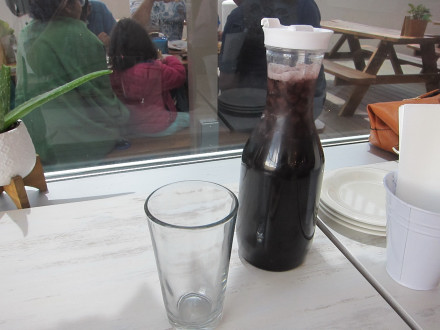 Another item of which I am a fan is the Chicha Morada drink, made with purple corn, pineapple, and sweeteners. I found the one at Amar to taste virtually the same as ones I had previously, giving me the satisfaction that both the food and drink at Amar were up to my expectations. I thought the drink had a fruit flavor (I did not detect a corn taste), and it pairs well with the food served here.

The pitcher (shown in the photo) gives you more drink for the money, and in my case it was more than enough for three people. Otherwise you can get a single serving.

This photo also shows the outdoor patio visible through the window which provides a significant increase to the seating capacity of the restaurant.

Other Comments
The food here compared favorably to the Peruvian food I have had previously, and locals recognize this fact by filling the restaurant and the outdoor patio at the times I have been here. The down side of this is that it may be hard to find a table (at least the ones that might be the most comfortable for you).

My first visit was at lunch, and the second one was also at lunch but on the weekend. The difference in price between these two visits was such that on the weekday I ordered the Lomo Saltado while on the weekend I got the Empanadas in order to save money. I do not know whether they have a lunch menu with less expensive prices or whether there is one menu but the prices had gone up between my two visits. If it is the latter then I would say the prices are the biggest issue I have with the restaurant.

A less important consideration is the fact that the menu is relatively small. They have one “chaufa” plate which is very upscale and not very affordable for me to get regularly. Really the variety of items here is not terribly bad, it is just the variety at the lower end of the price scale that was disappointing to me.