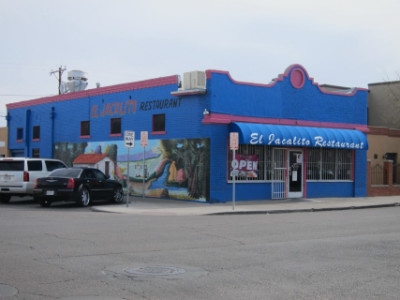 I think if I were to describe a Mexican style diner it might be based on El Jacalito in central El Paso. It is probably best known for breakfast, but it has a sizeable lunch crowd also. The sisters who own the restaurant know the large group of regular customers who come in, yet they remarkably do not look anywhere near old enough to have been running the restaurant for as long as I know it has been in operation.

Of course the restaurant does depend on its regular customers (I know because I was one myself when I worked in the area and could go to the restaurant frequently). I always thought of El Jacalito primarily as being one of the three best places to get caldo de res (one of the others is now closed and the other is Jalisco Cafe). The other notable feature I found at El Jacalito was the special Lent meals they served (I think it is the best in El Paso for this). Breakfast is probably the third thing of note here, although, there is nothing I can tell you about this from personal experience.

At lunch I saw a good part of the El Paso City Engineering Department and other people I knew at the restaurant on a regular basis. This is one way I always knew it was authentic, with the no-nonsense engineers seeming to be particularly choosy about their Mexican food.

For years a popular feature at this and other Mexican restaurants was the comida corrida which came with caldo de res (beef soup), a main item served with rice and beans, and usually a small dessert. Now they do not call it the comida corrida but the main elements are still there for those who want a standard sized lunch (other choices are available, mainly for those who want a lighter meal). I have always known them to have daily specials as well which offer items that are not on the menu. Many times (especially when they have Lent specials) I have found the best food to be the specials. This is not a hard and fast rule, but when trying to decide between two items with one of them being a daily special, I would say go with the special.

The soup is always one of the best parts of the meal, though, and is one reason I am never disappointed with a meal I have here. 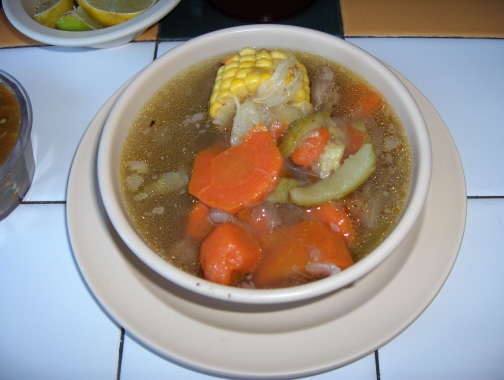 Lunches start with Caldo de Res, a beef soup full of more vegetables than meat. One thing that makes the soup here stand out is the vegetables (which are not only very good but there are more of them than at many other restaurants). I find the meat to be a little fatty (they give you lime slices to counteract the fatty flavor). It seems, though, that the best cuts of meat are the ones they serve on the plates and the lesser ones are used in the soup (and probably all Mexican restaurants do the same thing). 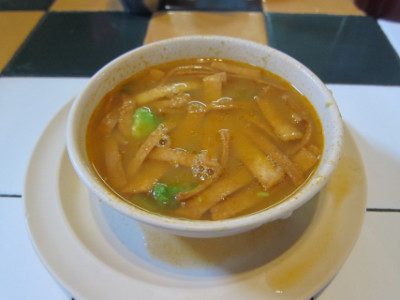 Tortilla Soup is one they offer as an alternative to the caldo, and when I ordered it there were actually three soups that were available. I thought this soup was quite good, and in many ways I like it better than the caldo (I think especially because of the flavorful broth). The only reason I would really recommend the caldo instead, though, is because I think El Jacalito’s caldo is one of the two best that are available in El Paso. 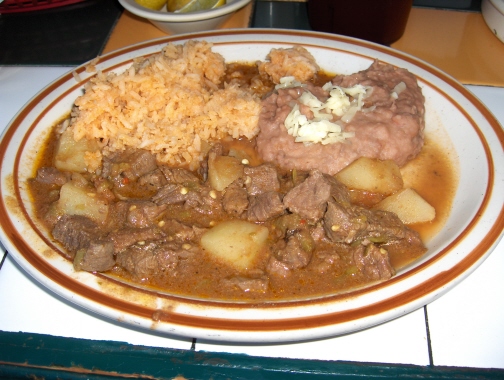 Chile verde is similar to a stew with green chiles

Chile Verde is one of the items where the good cuts of meat go, and I would say this may be the best example of this dish in the city. It is spicier then most, has a higher meat to potato ratio than most, and the meat is leaner than most. Most of all, though, I like the flavor of this dish. I think the spiciness might not be to everyone’s taste, but otherwise I do not know of any others you could try that are better. 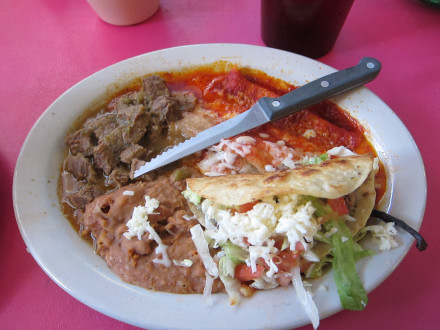 The Mexican Plate probably offers the best choice for lunch, with a taco, enchilada, chile relleno, and chile verde. Out of these the chile verde is the item I consider to be the best. The Red Enchilada has a good flavor but is south of the border style, and I think does not have the deep red chile flavor found in the local El Paso style enchiladas. The ground beef Taco is very good when you put salsa on it. I do not find the Chile Relleno to be high on the list of ones across the city except for the excellent cheese which is used here.

The rice and beans are very good, but as is the case with most restaurants, the Rice is better.

A small dessert is served with plate lunches, and I think is always home made.

El Jacalito usually has several types of aguas frescas drinks. Lemonade is sweet and has a very good flavor. Horchata is also excellent at El Jacalito.

I will say, though, that anything here that I call “greasy” does not lead to an aftertaste and thus I have no hesitancy in eating anything here. 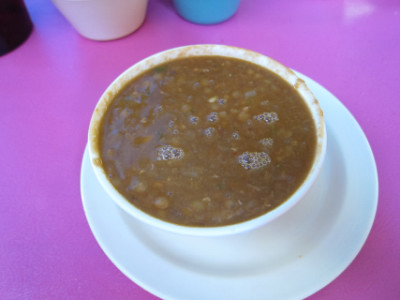 During Lent (on Fridays and other holy days in the Catholic Church) a Lent special is served offering a very good alternative to the normal meat dishes. Lentil soup, or Lentejas is always available, and this is usually the highlight of the meal for me. The lentils are always fresh, and the spicing is always just right (this is the part where many other restaurants do not quite stack up). El Jacalito usually has an alternative to the lentil soup if you want to try it instead.

I will make note of the fact, though, that in 2019 the lentil soup contained bacon and therefore was no longer vegetarian as I had always noted it to be in the past. In 2021, though, it returned to being a vegetarian soup (as was as good as I remember from before).

Corn tortillas are excellent with the soup and are free, but you have to ask for them (they come automatically when the main meal is served). 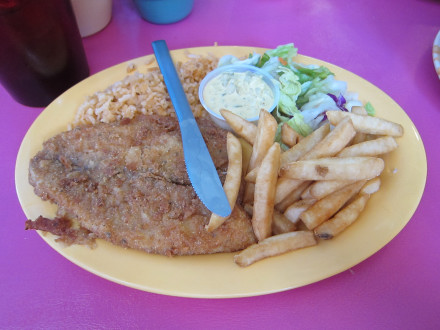 Each Friday during Lent there is at least one traditional fish and one shrimp dish available, and these are rotated each week with most of them being served more than once. One of my favorites is the Pescado Empanizado (shown above), largely because of the excellent tartar sauce. This is not a traditional tartar sauce and I think is closer to a mustard flavor than mayonnaise, but its strongest point is that it tastes fresh and home made. Also, beginning in 2019, I noticed a distinct improvement in both the breading and the flavor of the fish (the quality of the fish has generally improved in El Paso over time but it is particularly evident here with a very fresh and good tasting white fish). In any case, I would now say that the fish can stand on its own even without the tartar sauce.

My other favorite is one for which I do not have a photo, but it is the Pescado Veracruzano, a traditional Mexican style fish served with olives on top.

When they serve mashed potatoes this is sometimes better than the fish itself, although the french fries are very good as well. 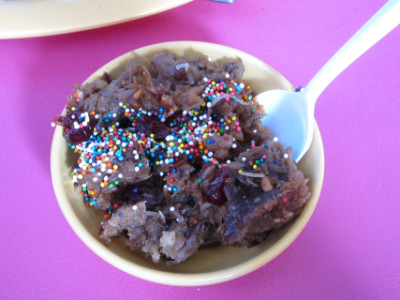 One of the highlights of the Lent dinners is the Capirotada for dessert, a bread pudding with raisins soaked in a syrup that made me think this could not possibly be a special dish for comida de cuaresma since Lent is supposed to be a sacrifice, isn’t it? Jacalito’s still has the best capirotada I have found. 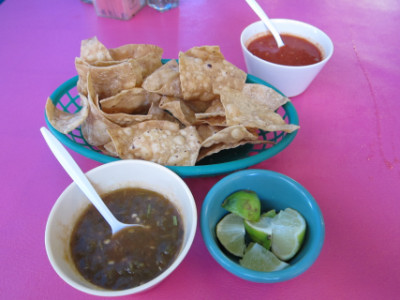 Almost every Mexican restaurant serves chips and salsa, but here you get two types of salsa (these can also double for salsas you put on your meal).

Personal Notes
El Jacalito has many things I love, and some I could easily skip. This is a restaurant in a working class neighborhood where many people go every day or at least on a regular basis to get the type of Mexican food they knew growing up. I think people like the variety here, although like me they probably have their favorites. One thing that sometimes deters me is the line they usually have of people waiting for a table at lunch, although after the pandemic the wait seems to be shorter than before.

If you have a chance to try the Lent specials comida de cuaresma, I definitely think this is something that should not be skipped. The price here is also very good compared to other restaurants that offer the traditional lentil soup and capirotada.