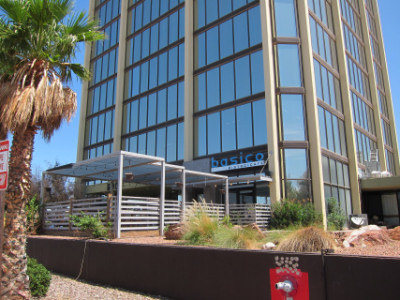 Basico Bistro + Cafe is following a pattern I have seen with many restaurants lately–it has multiple (in this case three) locations in El Paso but they are small compared to most of the older restaurants. I think the covered patio had more tables than the restaurant itself, and both the patio and dining room filled up for lunch quickly on the typical week day that I visited.

I was happy to see a restaurant in Coronado Tower, the west side’s only high rise office building. I have fond memories of the private club that used to occupy the top floor and served some of the city’s best upscale food, but I do think there were restaurants off and on on the ground floor (although I do remember trying any of them). Basico is not difficult in terms of parking or getting to the building–I think the only real obstacle is that they do not seem to be very visible from Mesa Street.

The specialty here seems to be breakfast, along with the different types of coffee and drinks that go along with it. Going in at lunch time, I am not sure whether they gave me a breakfast menu or whether I merely glanced over it and focused on the lunch dishes. Lunch appeared to be what I would call New American with some interesting items that I do not see in many places. Yelp’s description of “Traditional American” is not the way I would describe what I saw on the menu. 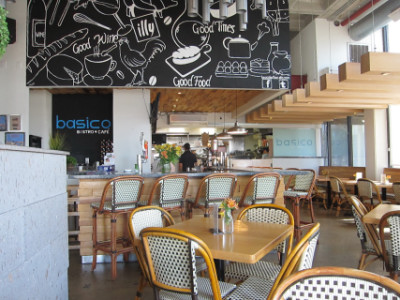 First of all I should explain that I got in before the rush, and it is not normal for the dining room to be this empty. It was a good opportunity, though, to get this photo.

The dining room was, in fact, one of my favorite aspects of the restaurants. It was comfortable, and the service was so professional I thought I was back in Oklahoma City (not what I see in too many of El Paso’s restaurants). I am seeing better service overall in El Paso restaurants than in the past, although for years places such as the private club at the Coronado Tower have led the way.

In reading the reviews on Yelp I also saw a repeated mention that people thought the prices at Basico were too high. This is always an issue at any restaurant because people always want to feel as if the value of the food matches what they paid. Basico sets a high bar because it is pretty costly compared to other restaurants (and is even high compared to Ripe–a fairly upscale restaurant that I frequent).

In short, the one dish I have tried so far has not totally convinced me to make return visits, but the pleasant atmosphere, great service, and other possibilities including the breakfast menu make this a very good prospect for enjoyable future experiences. 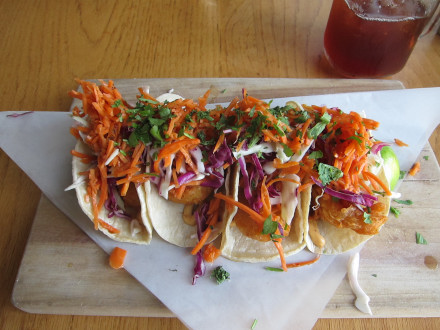 The best reviews for the restaurant look as if they are for breakfast, but there is a good lunch crowd as well (and I think there is oone menu for both lunch and dinner). I was looking at several items to order on my premier visit, but out of my possible choices the waiter suggested Fish Tacos. This is a dish I have had quite a bit in El Paso so it is becoming a dish that is fairly easy to critique. Probably the best feature of the tacos was the quality of the fish–not that anything in El Paso has been substandard but this one was notable for the freshness and flavor. The breading was a particular point where I would rate it as even better than ones I have tried elsewhere. Overall I think this was a very good suggestion. The toppings included aioli, raw carrots, red cabbage, and lime to squeeze on top (with extra lime if you want).

There were no side dishes, but the tacos did not really need any–the tacos contained all the food groups (fish, vegetables, etc.). In terms of flavor, though, I think I would have preferred the more traditional plain fish where you might add some type of salsa, and to have a side dish. I want to have an open mind about “New American” food but on this point I think I like the traditional way better.

I was almost a fan of the raw carrots but there were so many on this dish I hardly got a taste of the fish. The aioli was quite good, though, and I was pretty much in taco heaven squeezing the fresh lime on them.

I should also mention that the Iced Tea was as good as any I have had in El Paso, and I stayed longer than I had planned just to get a couple of extra refills.

Other Comments
Although everything on the fish tacos was excellent, I was not really a fan of the raw carrots that covered them. Sometimes I want to break away from my routine when it comes to food, but I am finding with many of El Paso’s new restaurants that it is not easy to find new items that I want to regularly put into my rotation.

Basico has several huge pluses, with the main one being the quality of the food. I am not sure if I will be on the same page with them in the flavor of other items I might try, but I would definitely consider trying some of them. I think, though, that I need to try the breakfast to really know why this restaurant has been so popular.