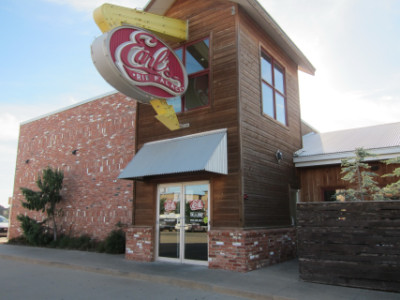 Earl’s is one of several “mini-chain” barbecue restaurants around the Oklahoma City area, and is one of the most popular with locations in Bricktown, North Western (the original), and several other areas. The name “Rib Palace” more or less implies that ribs are the specialty, and most of what I have read on reviews indicates that this is the case.

One of Earl’s newest locations on Memorial Road seems to have no shortage of customers (many of which go for takeout). The various barbecue restaurants in Oklahoma City are almost as common as fast food restaurants, and I think they are almost as popular. Prices are a little higher here than at fast food restaurants, but people rightly enjoy the quality of slow cooked meat and a variety of freshly prepared side dishes. 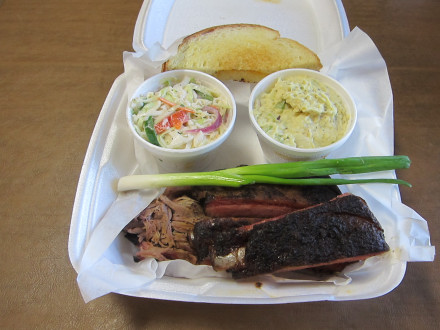 On my first visit I shared a Rib Dinner which contained six ribs (and is the size that I think lends itself to feeding more than one person). The above photo shows the two-meat combo dinner with pulled pork and ribs, which I think is good for one of my normal sized dinners.

Both times ribs were fall off the bone tender, and were well smoked with a very good flavor. It is somewhat hard to describe, but these ribs are different from most of the others in the city. These are very meaty (which the other restaurants can sometimes compensate for by giving you more ribs). The falling off the bones, though, seems to be partly because of the meat itself which is very tender without a noticeable amount of gristle. I do not think it can be attributed to a tenderizer, which would likely have changed the flavor as well as the texture. There are other restaurants in town that have very good ribs, but none I have tried are like the ribs at Earl’s. These are smokier, and I think taste better without barbecue sauce than others (although Earl’s does use a rub). To do a taste taste I got the ribs at Billy Sims a short time later. Both were good (in fact equally good) but the smoky flavor at Earl’s just made them stand out to me and is something I would really recommend.

The Pulled Pork, in contrast, had little that made it stand out from other restaurants. I would order it again, but I think it is probably better at other restaurants (Billy Sims would be one of them).

Side Dishes
The side dishes were not as outstanding as some I have tried in other barbecue restaurants. I liked the Potato Salad with the skins left on the potatoes, and I got to eat all of them because my dining partner did not share my fondness of it. This is a mustard based potato salad which I do prefer over the mayonnaise based ones.

An order of Beans I got on the side was about average for barbecue restaurants.

The Cole Slaw seemed to be the best of the side dishes, though. It was fresh, and the sauce was tangy without being too sharp.

The Okie Toast was not as good as ones I have had at other barbecue restaurants, but it was enjoyable.

Other Comments
I have limited experience here, but both times the standout was the ribs. On my first visit I experienced an MSG-type reaction to the barbecue but this did not happen the second time. I am very glad I went back because the ribs were quite impressive. I do not think the food has changed, but I think I am no longer as sensitive to MSG-type of seasonings as I used to be (and Earl’s does not use MSG but just had something else that set me off at the time).

The dining room is a little more upscale than at most barbecue restaurants, but you still order at the counter and get your own refills on drinks. They have salads, sandwiches, burgers, and sides that make it more like a family restaurant rather than simply a barbecue place. 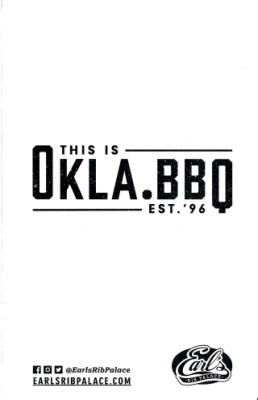 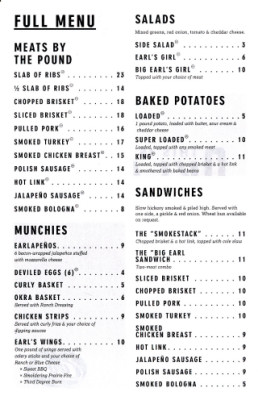 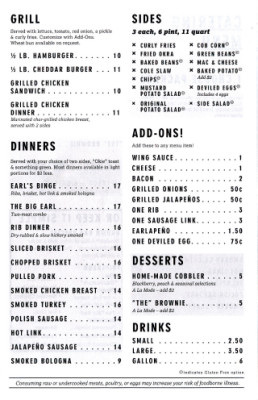 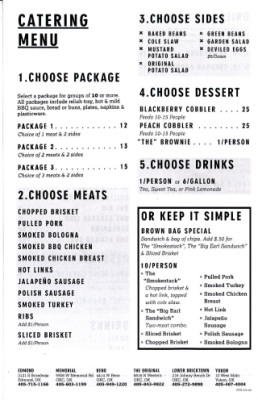