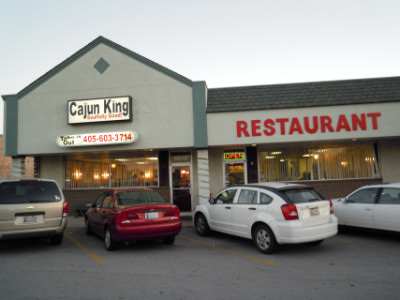 Cajun King is a buffet restaurant which at present (2020) has discontinued the buffet because of the pandemic. As a substitute they are now offering combo meals with three main dishes and two sides or individual items from the menu. Some items served in the buffet are not available from the menu, but most of these seem to have been daily specials or items which were rotated on certain days. I think that most of what was served before is still available.

My previous complaint was that the buffet was a little on the expensive side, and I am not generally interested in testing myself to see how much I can consume at one meal. The current dinners at Cajun King, though, give customers a lot for their money, the combo meals give somewhat of the same variety they got from the buffet, and prices are competitive with other restaurants for the quality and quantity of food received. Personally I like the options they now have (which include both combo meals and individual items).

One advantage of the buffet was that it allowed me to try everything on the menu that I wanted and made it easy to determine my favorite items. With the combo meals it is almost as easy, although the side dishes are the ones I particularly liked to sample when they had the buffet. My first visit was in 2010, and I find that the food has really not changed at all during this time period. The only big difference is that there are not as many items available as there were before (particularly on the side dishes).

The staff told me that Cajun King has both Cajun and southern food, and I believe this is accurate. I understand that the owners are from New Orleans which is known for Creole food rather than authentic Cajun. One difference is that Creole food is not generally as spicy as Cajun food, and I have not found Cajun King to be particularly spicy. Also, though, the fried chicken here is cooked in a way that used to be common in Oklahoma City but which is now very hard to find, and which I believe had its roots in southern cooking.

I think it is safe to say that everything here is good, but for the main dishes I particularly like the fried chicken and blackened pork chop. I believe they no longer have the blackened chicken or blackened catfish, which I also enjoyed quite a bit. It is probably safe to assume that if they can go back to the buffet some of these items will be available again, but most of the things I really liked are still available. 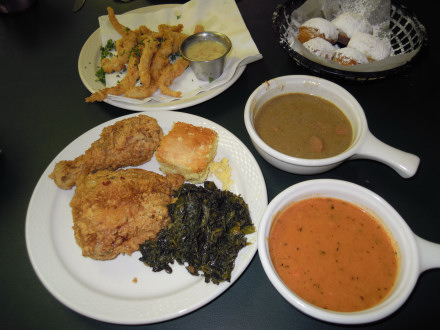 Although the buffet has been suspended, it gave me a good idea about what I would like to order out of what I think are a lot of good choices. The Fried Chicken was certainly one of my favorites, and to me it tasted very much like a southern style pan fried version of the dish. The chicken in the buffet had a strong cinnamon flavor, while the one I ordered in 2020 (non-buffet version) was not as strong on the cinnamon. It still seemed to be equally good, though. Both of these versions had a moist, well flavored, and non-greasy version of fried chicken.

The Fried Catfish Strips were formerly served in a basket that they put on your table when you ordered the buffet (along with a basket of beignets that were also meant to be eaten with the meal). Now the catfish is one of the main course items you can choose on a combo meal (each combo comes with a choice of three main dishes). Both times it has been a very good catfish compared with others I have tried (like the chicken it has a lower grease content than many others). The big attraction for me, though, is the excellent dipping sauce they serve with the catfish. I thought the sauce was expertly crafted much like some of the sauces served in Asian restaurants (the sauce at Cajun King was not too sweet but it was sweet enough to be very good with the catfish).

The Shrimp Bisque was one of the soups of the day they used to have on the buffet that was rotated periodically. Gumbo is an item that can be ordered on their new menu, but only in a large (10 oz.) portion served over rice. Both of these are what I would describe as New Orleans style rather than true Cajun food, and out of the two I preferred the bisque. 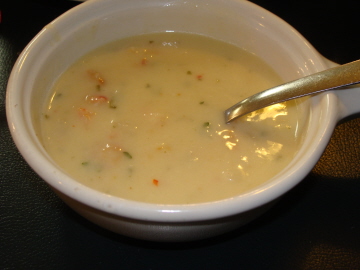 The Crawfish and Shrimp Chowder was another soup of the day, and it was also excellent. The creamy broth and the seafood were both very fresh and flavorful. This is currently available as a 10 oz serving (served over rice), and personally I would pick it over the gumbo. 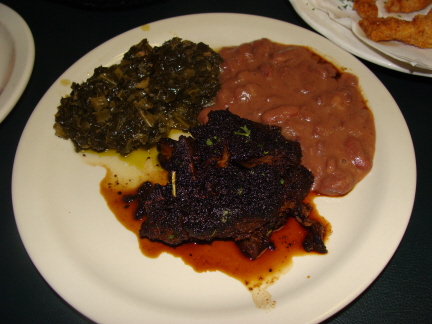 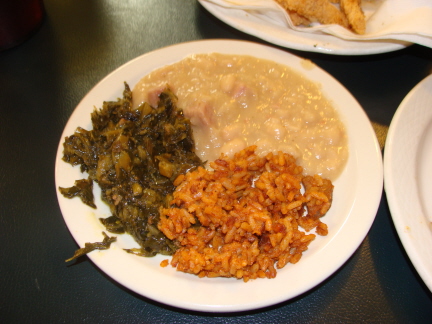 Some of my favorite items from the buffet which are now available as side dishes are Red Beans and Collard Greens. White beans are no longer available but I thought they were very good as well.

The Jambalaya is a good choice but it is not made in what I think is the authentic Cajun style (with sausage or another type of meat). I really have no complaints about the one here, though, and I think it has a very good flavor. 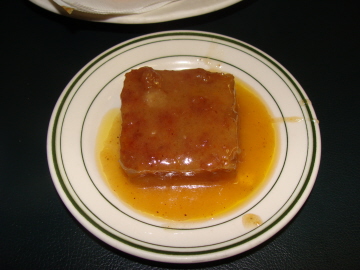 The Bread Pudding here is one of the best I have found anywhere, and I think the secret is the syrup they use. This is one of the dessert choices now on the menu, along with cobbler and cheesecake (I do not think I have tried either of these because I always thought the bread pudding was so good).

Beignets are something they always gave you with the meal when they had the buffet (much as the old style New Mexican restaurants give you sopapillas with the meal instead of as a dessert). Now the beignets are one of the bread choices when you order a combo or they are available on the dessert menu. 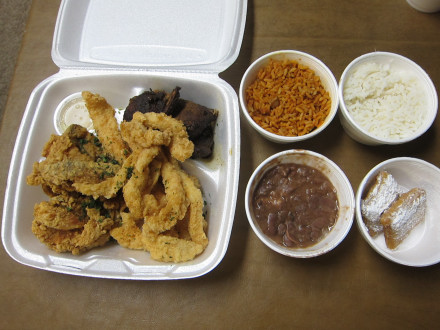 In the Post-Pandemic era (defined as March 2020 and afterward) Cajun King has replaced the buffet with combo meals and other choices you can get from the menu. The combo meals are designed to give you the closest experience possible to the buffet with three main dishes, two sides, and either cornbread, rolls, or beignets. The list of sides available is pretty impressive although they do not include some items that were served before, especially those that were soups of the day or daily specials. The choices for the three main dishes is not unlimited, but they have nine choices including one with only two items (chicken tender and catfish) and one with a single item (blackened chicken pasta). All of them have the same choices for sides.

All of the combos except the blackened chicken pasta have at least one main dish which is fried, but otherwise this is a fairly healthy option for eating Cajun food and frankly to eat the type of food they do in Louisiana. Some of the other menu choices are probably even more healthy and do not involve any fried foods, but the variety of items and side dishes available is more limited than on the combos. I do want to stress that getting a combo meal does not mean you are pigging out–it is merely getting fairly small servings of a lot of items (although I do think there is enough food to share it with someone if you would like).

Other Comments
After trying several Cajun restaurants in Oklahoma City I feel that the main strength of Cajun King is that you can get more of the type of food people normally eat in Louisiana (i.e. not a lot of it is fried).

The down side of Cajun King has been that I felt that a lot of it was not authentic Cajun style. For instance, I was disappointed in some of the etouffee dishes and the gumbo.

I think the Southern and Creole cooking here is top notch, though, and I am particularly impressed with items such as the fried chicken, collard greens, and bread pudding.