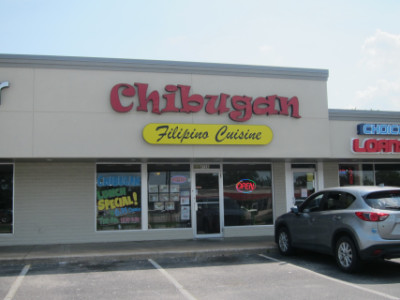 There have been many articles on the Internet about people’s opinion that Filipino cuisine is one of the best, yet there are extremely few restaurants in the United States in proportion to the number of Filipino people living here. I have watched both Bhing’s Cafe and Evelyn’s Asian Table close, and with both I was convinced that more people would like Filipino food if they tried it. Fortunately there is now another opportunity to try it at Chibugan in Del City (which I was first alerted about in 2016 but I was able to make my first visit in 2018).

I was encouraged when I saw the amount of business the restaurant is doing, and I think they made a wise business choice by locating near Tinker Air Force Base (military bases traditionally attract small mom and pop Asian restaurants nearby because many of the personnel have been to these countries and tried the food). It might seem as if this is a prime example of a niche cuisine that would not attract a large segment of Americans, but I come back to my statement that this will change once people try the food.

With the previous restaurants I visited the biggest hurdle was trying to figure out the menu. I mainly followed the suggestions of the owners and got good results, but I know that this will continue to be an issue with many people. Chibugan has what some people call a “streamlined” menu with additional daily specials posted on the wall, and you can see pictures of the items. Although I still had questions, the staff was very helpful in explaining everything.

Like any cuisine, Filipino food has a large number of styles of food, and at Chibugan you can get what you want from a light lunch to a very substantial meat dinner. The default for Filipino food is that it is not spicy, and mostly it is like other Asian food but with a few twists (for instance I tried one dish that had a large amount of celery).

My experience was that I asked questions about the dishes that looked interesting, and they explained it to the point that I was satisfied that I had made a good choice. I give ratings to restaurants based not only on my own experience, but also on what I think it will be for other people. I felt very comfortable that even those who have no experience with Filipino food will have a good idea about what they are ordering here. 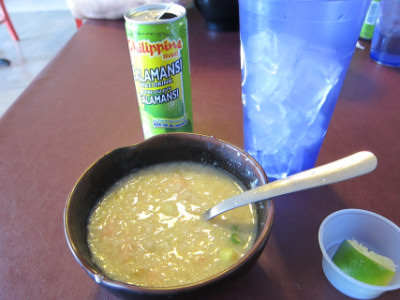 With any order you get a complimentary Chicken and Rice Soup. This was a very delicious indication of how the rest of the meal would be. 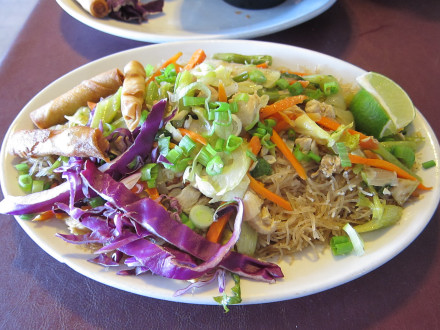 I ordered two dishes with the idea that I could take some home and have somewhat of a variety of items to report. I turned out that these dishes really could not have been more different. The Pansit Bihon was a very light dish that I would say makes a very good lunch. It was a little like Chinese chow mein but it had a strong celery taste and the lime you put on top makes it taste very tropical. In any case I thought it was very good, and I happen to like this type of healthy but flavorful food. 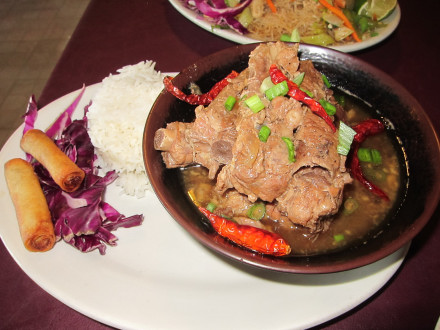 At the opposite end of the scale was Pork Ribs Adobo which was a very substantial meat dish. It had much more flavor that I had expected, but even more surprising was the way the meat fell off the bones in a way that was just right. Much of the flavor came from the sauce and from the seasonings cooked into the meat. I thought this was a very good example of Asian slow cooked meats.

The dish is topped with Asian red chiles, but if you leave these alone the dish is not spicy.

All plates come with Lumpia on the side (the Southeast Asian version of an egg roll).

Also available are canned Philippine fruit drinks in a variety of flavors that I thought was a perfect touch with the meal.

In short, I was very happy with my two meals here (I took the pansit home for lunch the next day).

Chibugan Restaurant in Del City, OK (near Tinker Air Force Base in the Oklahoma City metropolitan area) will be open soon, and as far as I know will be the only Filipino restaurant in the metro. 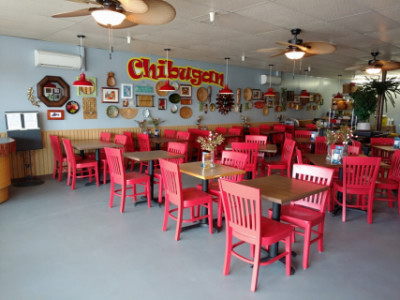 It looks as if it is almost ready to go, but they have not yet announced an opening date.  Those in the area, though, may want to keep a lookout for it. 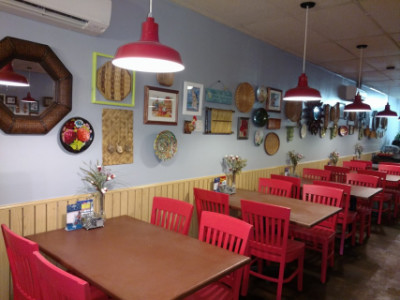 Filipino decorations on the wall

Thanks very much to Arlene Clifton for providing the photos and for giving us a heads up that Filipino food will soon be available in the Oklahoma City area.