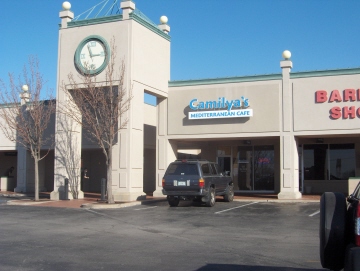 Camilya got this restaurant off to a very good start by serving fresh, home cooked style food in a small cafe style setting that did not make customers pay high prices. In 2010 the current owners took over the restaurant, continuing the same type of food that Camilya cooked (since that time some of the family members opened Jerusalem Restaurant in Edmond which is excellent as well and serves the same type of food).

Camilya’s is rather inconspicuous, being a small restaurant in a strip shopping center in the north part of Oklahoma City. Food is cooked on a grill in view of the dining room, and the small scale on which food is prepared is a main reason for its high quality. Even though there are less than a dozen tables in the dining room I have never seen it so full that people had to wait for a table. Those who do eat here, though, seem to appreciate the good quality of the food served in this true “family restaurant.”

Normally when a restaurant changes owners I have to start over in writing descriptions of the food, but in this case there have been few differences from before. The veggie sampler plate has different items than before, several new menu items have been added, and the plates have become more colorful so that I can now take more interesting photographs. I have upgraded the ratings of some of the dishes, but I do not think there are any that needed to be downgraded. I think the “new” Camilya’s is very much like the old one, only better. Technically the original Camilya’s was Syrian cuisine and now it is Jordanian/Palestinian, but I have a very hard time distinguishing the differences between them.

Salads
Several salads are available, served in both small and large portions. Small salads come with many of the dinners, and these can be upgraded for an extra charge. If I have a large enough appetite I think it is worth ordering the fatoosh or Greek salad. 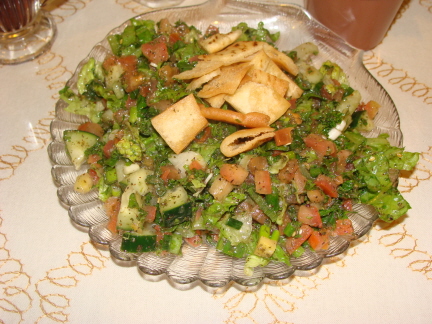 The Fatoosh Salad was one of the freshest and best I have had anywhere. The portions of lettuce and other ingredients were not huge, but the quality was very good.

The Greek Salad came with a very good dressing, and the olives and feta were highlights of the salad. 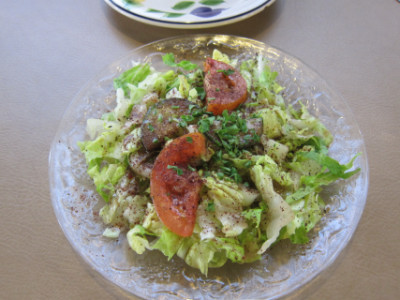 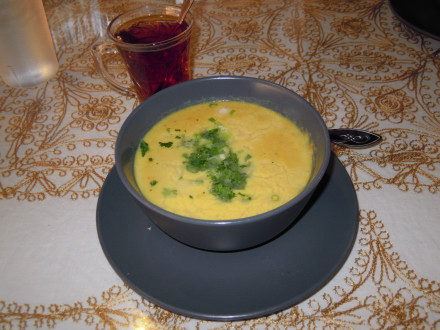 Lentil Soup is apparently a new item that was added in 2010, and it was excellent. This was a home made soup made from yellow lentils, and with a generous amount of vegetables included. This was a smoother soup than others in the city, with the lentils being puréed to the point that round beans were not noticeable. I enjoyed the flavor, the texture, and the inexpensive price of the soup. 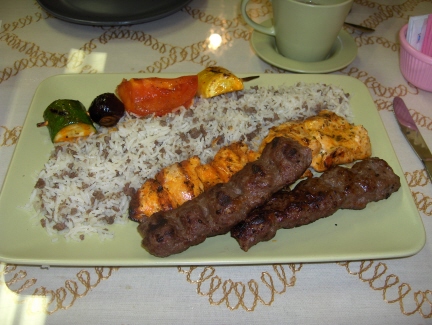 The chicken and beef skewers were every bit as good as I had expected, having been referred to Camilya’s in the first place by family members who have too limited a budget to waste it eating out on food that is not truly worthwhile. The Keftah Skewer was made with ground black angus beef seasoned with what is probably a family recipe. I thought it was well prepared, and had especially good spices.

The Tawook Skewer was made with flavorful chicken and similar spices as the keftah skewer. I have gone back and forth on different visits trying to decide whether the chicken or beef was better, but I can definitely say that both are good. I also fall on the side of ordering the chicken because the one here seems better to me than the ones at any other restaurant (while the beef at several restaurants is comparable). 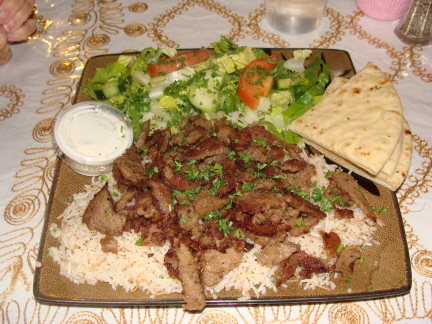 I would rate the Gyros as one of the best items served at Camilya’s, and it has a flavor that is quite different from many of the small gyros restaurants and take-out places in the city. The meat was tender, flavorful, and definitely high quality. Gyros comes in a sandwich, or the Gyros Plate which comes with a salad.

The bed of Vermicelli Rice on the gyros plate and other dinners is excellent. Hashwa can be substituted for the rice, but most of the time I think the rice is just as satisfying. 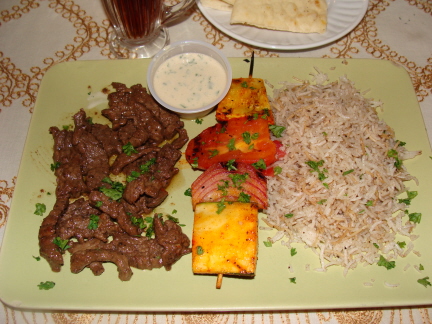 Beef shawerma and chicken tawook on the combo plate

Beef Shawerma is the “Mediterranean version of fajita,” according to the menu, and I also thought this was quite good. Made with tenderloin steak, tomatoes, and onions, it provides a different type of beef than the keftah skewer, but I thought the meat was of equal quality. The shawerma normally comes in a sandwich, but it can also be served on a platter if requested. 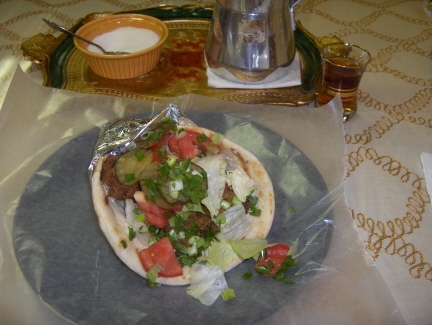 Vegetarian items are usually the weak point of Middle Eastern restaurants, but it is not so at Camilya’s. The Falafel has been quite good, and I think this is one of the hardest vegetarian dishes to get right. The key to falafel seems to be preparing it fresh and not making it too greasy. Camilya’s hit the mark on both of these. I have tried the falafel on more than one visit, and it has always been moist with good spices. The pita was very good as well. 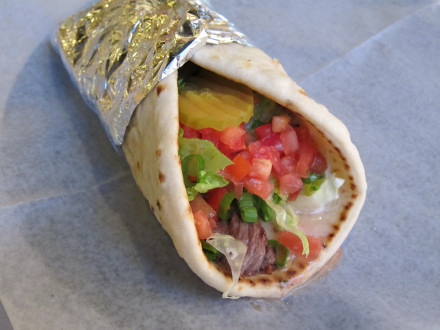 A Lamb Kabob Sandwich has recently been added to the menu, while a larger lamb shank dinner is also available. The sandwich is one of my favorites at Camilya’s, and the best feature is that this is one of the most inexpensive places in the city to order lamb. 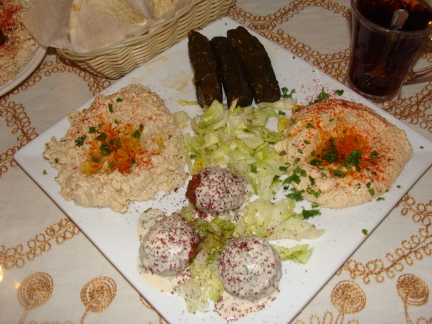 Falafel is also served on Camilya’s Sampler plate, an appetizer combination plate containing four vegetarian items. The Hummus was very good, and I think has improved since Camilya served it. The Baba Ghanouj was less flavorful than the hummus, but this is true for me at just about all Middle Eastern restaurants. The Grape Leaves were also excellent.

A falafel platter is available from the Appetizers menu, and is probably too small of a portion to make a meal but can be combined with other appetizers for a filling dinner.

Tabouleh was one of the best vegetable items I have tasted, and as far as I am concerned would always make a good choice. I thought the tabouleh had a strong taste of olive oil, and all ingredients were fresh and good. 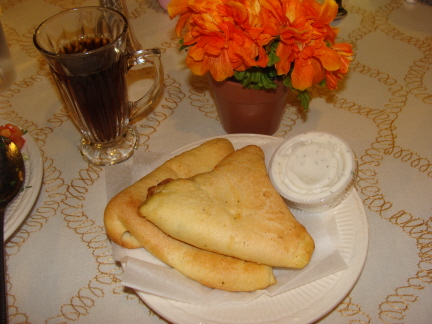 Spinach Pies are available on Camilya’s sampler, or they can be ordered separately. I was very impressed because the outer dough tasted fresh and did not seem as if it had been frozen (this is a common problem I find at other restaurants). The inside was excellent as well, and I really think this is the best place in Oklahoma City to get spinach pies. 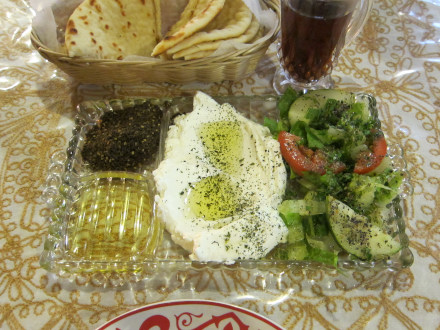 Labaneh, a yogurt dish made with goat’s milk, has been pretty bland and boring many times I have tried it, but Camilya’s makes an extremely good version because of the olive oil dip along with the oregano, thyme, and sesame mix that gives it quite a zesty flavor. In fact, this makes an excellent alternative to any of the salads on the menu (and the labaneh also comes with its own salad). 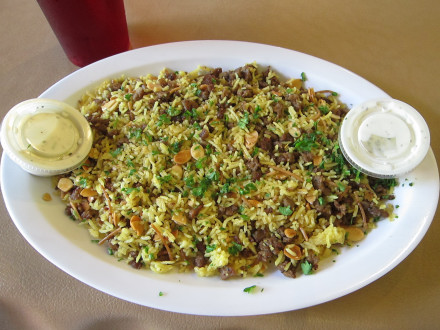 The Hashwa rice cooked with black angus beef, pine nuts, and almonds makes an excellent dish by itself, or can be ordered as an upgrade to the rice on the dinner plates.

Mojaderah is a vegetarian version of hashwa, made with lentils and steamed rice. This started out as a special but is now on the menu. 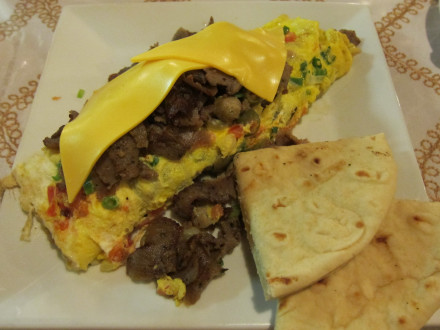 Camilya’s has added a special menu of breakfast items, including the Gyros Omelette. The owners explained that some of the employees used to work at IHOP, so they started preparing omelettes to be served at Camilya’s. 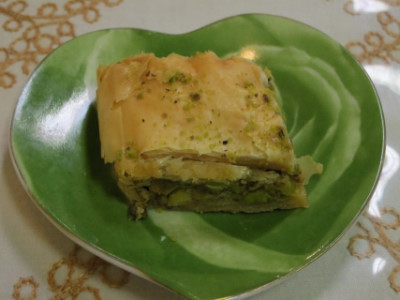 It is hard to resist the Baklava for dessert, since I think this is the best in the city (but other places make baklava that is close). Other more exotic desserts including layali lubnan and kunafa used to be listed on the menu but are no longer included (I am not sure if these are still available from time to time or by special order).

The Hot Tea is a brewed masala tea that has had a very good flavor, and I think this type of tea goes perfectly with Middle Eastern food. For those who remember the special Middle Eastern style tea served in a pot (shown in the photo of the falafel sandwich), this is no longer served. I do like the masala tea, though.

I have seen Turkish coffee and strawberry banana juice on the menu, but the take-out menu (shown at the bottom of the page) does not list the drinks so I am not sure what is available at the moment.

Apart from the quality of the food, the thing that is impressive about Camilya’s is that it is really like entering a restaurant in the Middle East, with few if any compromises made to change the food for American tastes. In fact, because it seems to be more authentic than many restaurants I think this makes it better. Camilya’s has gyros (normally considered a Greek dish), but the meat is different here than other places, and they cook it in house. Even dishes that do not look as if they would be especially good turn out to be much better than I expected.

For many items Camilya’s is better than any other Middle Eastern restaurants I have tried in the city, but this is not true across the board. The previous cook at Camilya’s opened Jerusalem in Edmond, and I have to say that this is one restaurant that is comparable to Camilya’s in terms of the food. Other restaurants, such as Nunu’s, are better at certain items. I continue to be impressed, though, by the overall quality at Camilya’s.

Camilya’s has not had take home menus for a while so I am including the latest one I have.

I have conflicting information about the hours–recently they were open on Sunday but I am not sure if this is still the case (for a while they were open Sunday for lunch only).

I do not believe there is a charge for you to bring your own wine.