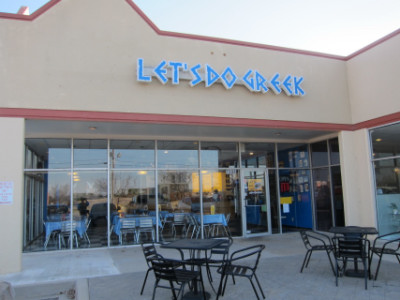 Lets Do Greek on Hefner Rd.

Update Jan. 2021: Even before the pandemic the restaurant had been serving food in to-go containers even if you ate it in the restaurant. Thus it was fairly easy for it to switch to takeout only, and it continues to operate this way (or you can get delivery through one of the delivery services). The procedure is to call in your order and they bring it to you outside (you call them again when you arrive). They now have a 7 p.m. closing time, and are closed Saturday and Sunday. I am not sure if the food truck is operating at the moment.

Let’s Do Greek had been operating in Edmond for a number of years before it moved to its present location in far northwest Oklahoma City. Along with the move has been a greater emphasis on its popular food truck, with the restaurant restricting its hours so that the owners can devote the time necessary to their mobile location. The official hours on the restaurant’s web site are Monday through Friday 11 am to 8 pm. Google reports that it closes at 7:30 pm, so there might be some difference between summer and winter hours.

Much of the menu is well suited for a food truck, and includes a large number of sandwiches and fast food type of meals. I believe the menu has been cut back from the one they had in Edmond, although my favorite dish from the old restaurant–suvlakia chicken–is still available (it is not served from the food truck, though). Even if the menu is not what they had in Edmond, I believe it is at least 90 percent the same.

The type of food served is also interesting. The husband is originally from Venezuela and the wife is from Iran. They have added items from both of these cuisines to make it more interesting, but the core of the menu is still Greek and Mediterranean cuisine. The most popular item at the restaurant seems to be gyros, and this always seems to be a daily special when I go to the restaurant. 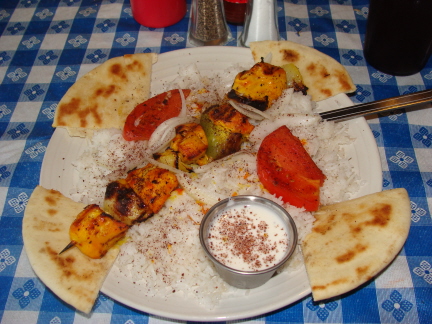 So far the Suvlakia Chicken has been one of my favorite items, and I think this compares very favorably to the various Mediterranean and Middle Eastern restaurants in town. The sauce was very good, the seasoning was perfect, but most of all I enjoyed the chicken. My description of the chicken is “tender and flavorful.”

At the Edmond restaurant the Suvlakia chicken also came on a sandwich or in a salad (now only the rice plate and the salad options are available). The “Let’s Do Bigger Plates” option is still available, and is the one shown in the photo (the plate comes with a Greek salad and a choice of rice). The Bigger Plates, although more expensive than the sandwiches, tend to be less expensive than similar items at other restaurants.

To me the greatest down side to this dish is the amount of barely cooked white onion that is included in it (which I am sure can be omitted but I always forget to tell them). 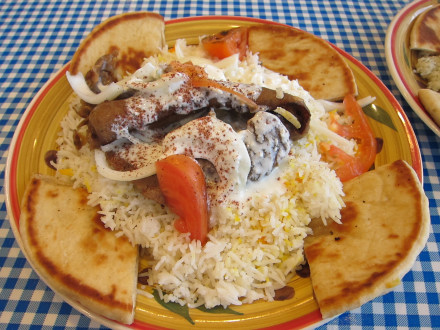 For me it is hard to compare the Gyros Bowl with the Suvlakia chicken, but I thought the gyros was good as well. The gyros bowl is often served as a daily special, and when this is the case it becomes particularly attractive as a meal choice. I thought the meat was quite good, and the grilled pita was a nice touch. 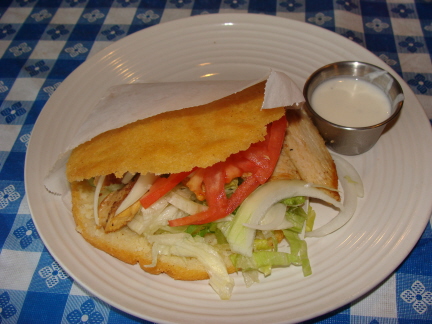 Chicken Arepa is a Venezuelan dish, but the one here is served with an excellent tzitziki sauce which I think may make it better than many others (the chicken was excellent also). I did not care a whole lot for the shell, and I found myself still being hungry after ordering this as a meal (other items that come on a bed of rice are better for satisfying my hunger). It is very tasty, though, and would make a good lunch or smaller dinner meal. 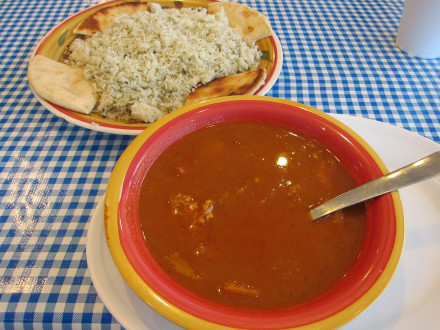 When I found out that the Curry Chicken Stew was a Persian dish I had to order it, and when I found out how good it tastes I had to go back to order it again. This also definitely gets my seal of approval, especially with the Dill Rice shown in the photo. The bulk of the dish is potato with enough chicken to make it more tasty and filling. I would describe the curry as yellow curry, with just a little bit of spiciness (it is spicy enough for my taste but I think it certainly would not be objectionable to those who are not as used to spicy food). 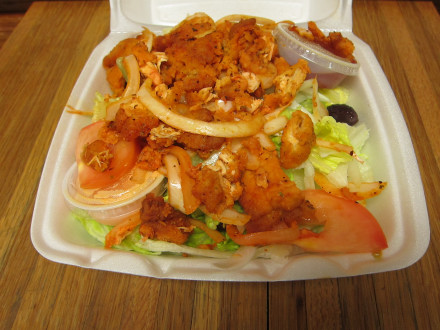 Oregano Chicken is available in five different forms: sandwiches, salads, bowls, Bigger Plates, and arepas. Thankfully, though, they are all the same delicious oregano chicken (cooked with virgin olive oil, herbs, and lemon juice). The salad was my favorite form of it because of the fact that the chicken tends to be spicy, and the lettuce is an offset to this. 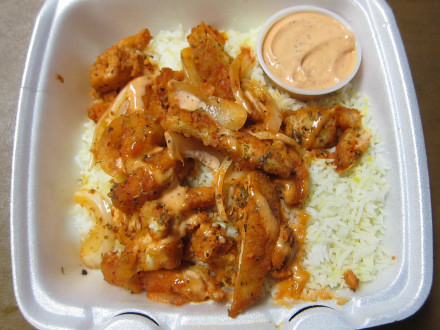 The Oregano Chicken Bowl also has very fresh and flavorful chicken, although I like the salad better for reasons outlined in the previous paragraph. 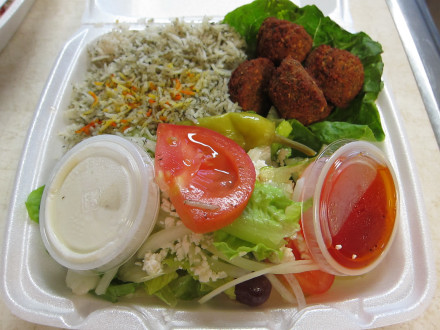 Falafel comes in three forms: salad, plate, or bowl (“bowl” simply means that it is served on your choice of rice–basmati and dill are the two I have tried). The photo shown here is the plate which comes with a Greek salad and rice (in this case it was dill).

I have to say, though, that the falafel tastes as if it is from a mix, and is the only thing I have tried so far that I would not want to order again (especially considering the number of other restaurants in town that have better versions of falafel).

I think this is a slightly smaller version of their regular Greek salad, and the salad was quite good. 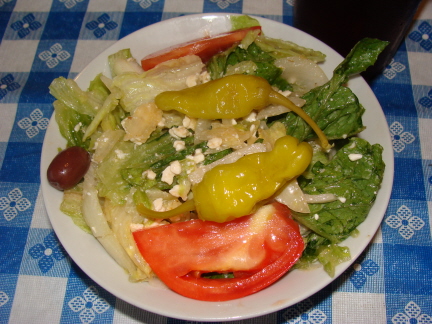 The Greek Salad is available as a menu item, and also comes with the dinners on the “Let’s Do Bigger Plates” menu. My salad came with a mix of lettuce greens, tomatoes, kalamata olives, peppers, feta, and a house Greek vinaigrette. Although it was very good, I think those primarily looking for a salad would find a better choice at some Middle Eastern restaurants such as Nunu’s.

Recommendations
During 2020 I was only able to get takeout orders, and this may have some effect on what would be the best items to order (or possibly on which items are available).

For both dine-in and takeout, though, I believe my favorite item is the curry chicken stew. It keeps well, and has an excellent flavor in either the restaurant or takeout setting.

The suvlakia chicken also did very well as a takeout dish and it is another one of my favorite dishes. I just think the onions should be cooked more or perhaps omitted altogether (in the future I may try ordering it without onions and see how this goes).

The gyros was one of my favorite items when they had sit-down dining because it was always on special and gave me a good meal for not much money. I did not look at the takeout prices that closely and I do not know if they still have specials on gyros, but if so this would be a good bet. The gyros compare favorably with ones I have tried in other restaurants.

I think the other dish of note is the oregano chicken, although this had the kind of spice I do not care for as much as I do with the curry. I did not have this dish as a takeout order but I am sure it would keep as well as the other dishes that I ordered (Let’s Do Greek does a good job of packaging the food for takeout).

Cuisine: Greek (with some Persian and Venezuelan dishes)
Cost: $$ ($ if you get the daily special)
Hours: Open Mon-Fri 11 am to 7 pm
Accessible: Yes
Smoking: No smoking