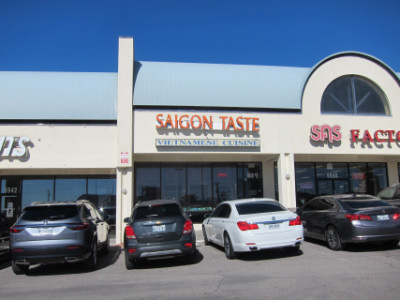 When Pho Tre Bien in east El Paso introduced the Sun City to Vietnamese cuisine, it seemed to be a perfect arrangement–the owners received a large amount of business and customers were treated to fresh, spicy, and healthy food that offered an alternative to the borderland’s ever present Mexican restaurants. To me the reason Pho Tre Bien has such customer loyalty is that it offers food that tastes as if it is actually from Asia, something that is largely missing from many of the Chinese and other Asian restaurants.

Saigon Taste’s opening in the summer of 2007 was the city’s second Vietnamese restaurant, and it has proven to be just as successful as Pho Tre Bien (both in the number of customers I have observed and I think in the food quality). Since that time Pho Tre Bien has opened a location near UTEP and another Vietnamese restaurant, Viet, has opened in far east El Paso. I actually think that all these restaurants are very good and the primary reason to choose one over any of the others is its location and convenience of going there.

There are some differences in the menus and the way certain dishes are cooked, though, between the various restaurants. I have not made a full comparison of the items at all the restaurants, but I think Pho Tre Bien might have better pho, and I was very impressed with both the pork chop and the bahn mi sandwiches. For just about everything else I have really enjoyed Saigon Taste, but there are many items at both restaurants that I have not tried. As of the writing of this review I have only been to Viet one time, and I thought it was comparable to the other two restaurants.

What I have ordered over and over again at Saigon Taste is the banh xeo, and I do not think anyone else in El Paso has it. For years I simply called it a Vietnamese pancake, and they will know what you mean if you call it this or the Vietnamese crepe.

In 2007 and subsequent years I used to see the owner quite a bit, and now there are different people at the restaurant. The owner was an architect in Vietnam, but could not practice in the United States until he got the necessary licenses and credentials for this country. I thought it was interesting that he specialized in designing small spaces for maximum efficiency because in Vietnam the buildings do not have much space. In the past few years I have not seen him, and I suspect it is because he has since been able to practice his profession in this country.

The big question for the restaurant, though, is what has happened to the food during this time. In general I think the food is the same or at least comparable in quality. They have downsized the menu, as I could tell by comparing the old menus to the new one. I do not like the lemongrass chicken vermicelli as much as I did before, but I think the regular chicken is much better and other dishes are very good as well. Thus I think the restaurant is just as good as before, but in some cases different items have become my favorites. 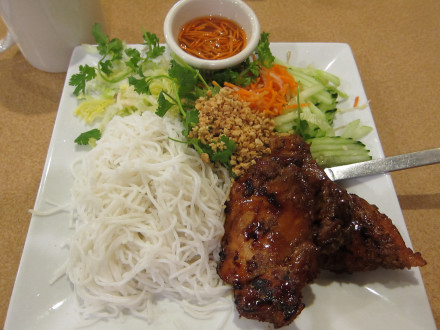 The Chicken Vermicelli is a little different from the ones I had experienced in other restaurants because this one is not cut up into small pieces, but instead is a large piece of dark meat. I actually thought this dish had a better flavor than most of the others I have tried. One reason is that the chicken has a very flavorful sauce while most of the others may have some kind of seasoning, but the only sauce you get is the fish sauce (which you also get here, shown in the small bowl at the back of the plate).

There was a generous amount of cucumber, peanuts, and other vegetables. Overall I think this is probably the best chicken vermicelli in El Paso. 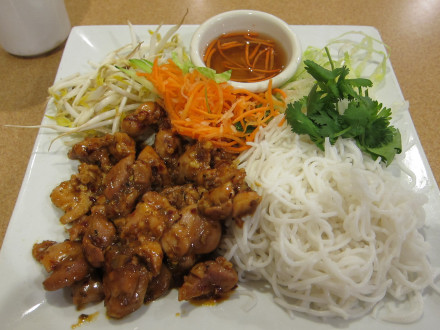 The Lemongrass Chicken, in contrast to the regular chicken, is a dish that I though was less flavorful than several others I have experienced in Oklahoma City and El Paso. I do not know the reason for this except that I think it was missing some elements of it such as peanuts that are normally served on vermicelli dishes. One thing I have noticed in many restaurants is that they only serve lemongrass with pork, indicating that they either do not think it goes well with chicken or they have not been successful at it, although I have had very good dishes at a number of restaurants. The one here is still one I would order, but it is just not as flavorful as others I have had. 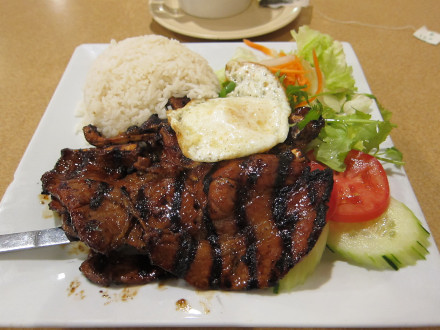 In theory rice plates are the same thing as vermicelli dishes except that rice is used in place of the noodles. In practice, though, some of the meats and toppings are different. One example is the BBQ Pork Chop with Sunny Side Up Egg, which is only served on the rice plate. This has become one of my favorite dishes at any Vietnamese restaurant that serves it, and the one here is a good choice for what I think is a true taste of Vietnamese cuisine. The pork chop here and other places I have tried it have been a little bit tough, and they give you a knife because a fork is not enough to cut the meat. Any toughness, though, is fully compensated for by a very flavorful sauce 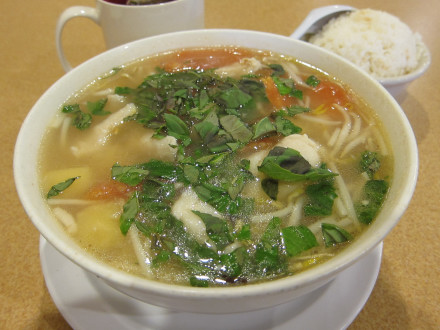 Although I am not sure how this is classified as a rice plate, No. 45 on the menu is Sweet and Sour Catfish Soup, which is one variation of canh chua (sweet and sour soup). This has a good balance of between sweet (sugar), tartness (tomato, pineapple, tamarind), and savory (catfish) flavors. One thing I liked was the basil leaves (which I think are also served with other soups such as pho) 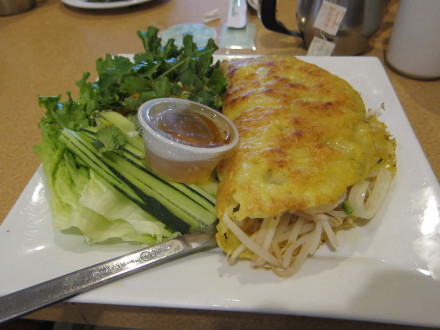 The “Vietnamese crepe” (Banh Xeo) which is No. 93 on the menu has been one of my favorite dishes since the first time I tried it. The shell is crispy, and thus is not really very much like either a crepe or a pancake, but it is very good and goes well with the ingredients which are stuffed inside it (shown in the photo below). 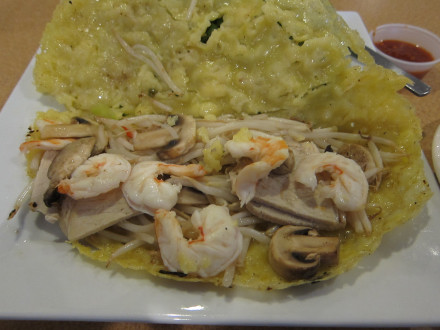 Inside the banh xeo are bean sprouts, shrimp, and pork. The lettuce, cilantro, and cucumber which they serve on the side is something I place on the inside to give it the flavor contrast I like with Vietnamese food. To complete the flavors I add the fish sauce which they serve, and ask for chile paste to add to it. This dish is so good, and I order it so often, that this is the reason it has taken me so long to try some of the other dishes. 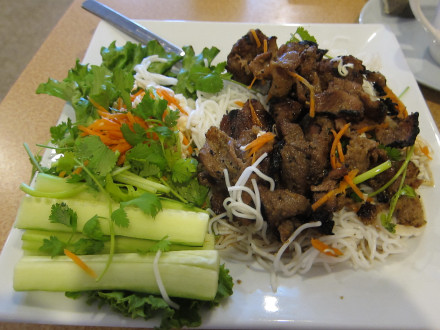 When I ordered No. 47 on the menu, Hanoi Styled Grilled Pork Vermicelli., I think I finally found the most iconic vermicelli lemongrass dish from Vietnam. For a while I did not notice it because it was in the “Saigon House Special” section of the menu rather than being listed with the other vermicelli dishes. This was a very impressive dish with a good flavored meat, and a very enjoyable contrast between the meat and the vegetables. It is apparent that pork and lemongrass go together well, whether this is a natural law or whether this is the way Vietnamese chefs have learned to cook it. 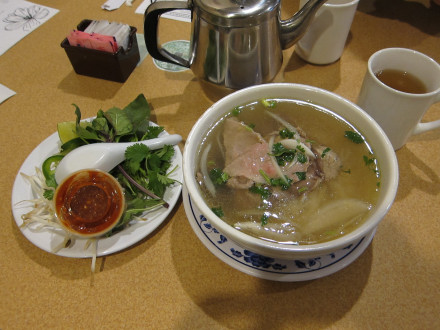 Small pho with eye of round steak

The Pho with Eye of Round Steak is one of the kinds that I typically order, and I have tried several of them in Oklahoma City. Although this one was good, I thought the broth did not have the flavor I have found in OKC. The vegetables were good, though, and one thing I really liked was the fact that it did not give me a MSG reaction (I think when Saigon Taste first opened it was adding a higher concentration of MSG than it is now). 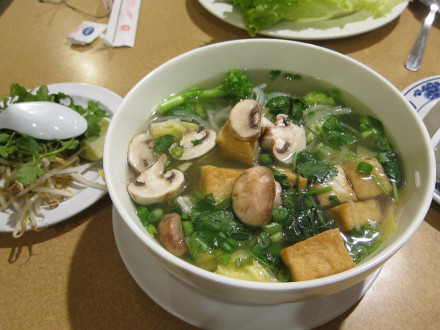 The vegetarian pho (Pho Chay) is something that I possibly think is better than the regular pho, and even if I were not judging it on flavor I would say it looks like something that is very healthy. Also I think the pho chay does not have any MSG. 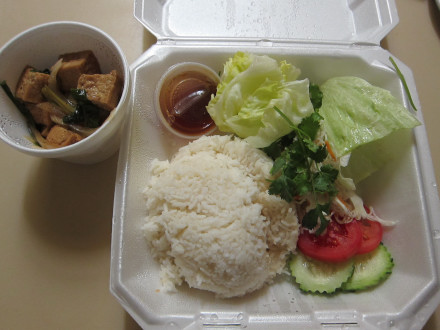 Another winner from the vegetarian menu is the Clay Pot Tofu & Mushroom (Com Tofu Kho To). This photo shows the takeout version, and of course the idea is to combine things for the proper flavor balance. There did not appear to be any mushrooms, though, and as with omissions I have had on other plates, it really did not affect my enjoyment of the dish. I was disappointed, though, that they did not give me any chile paste and I forgot to ask (for both take out and dine-in you have to ask them for the chile paste if you want it). I think the only MSG here is in the fish sauce (and I have found it to not be noticeable).

In A Nutshell
Saigon Taste has changed cooks since it first opened and raised prices relative to the other Asian restaurants in town, but there are things I particularly like about the “new” restaurant. The Saigon House Specials have been particularly good, although one I ordered before (banh xeo) was just as good back then. The MSG levels have dropped in everything I order now to the point that I do not worry about it (and this has been a definite improvement). I think the vegetarian dishes may be more flavorful than before, but this is based on a relatively small sample size. The charbroiled chicken vermicelli is much better than I remember in the past.

Although there is a large selection of drinks here, the hot jasmine tea I usually like to order is so much better at Pho Tre Bien that I am almost tempted to go against my earlier advice and go there even though for me it is a farther distance. Pho Tre Bien brews the tea in a pot, while Saigon Taste gives me one tea bag with no refills. The tea is not bad, but I almost feel that I am wasting my money ordering it. This may be inconsequential to many people, but my methodology for the blog is to inform the reader about everything I like and do not like about the restaurant (and hope I give others a good idea about what to expect).