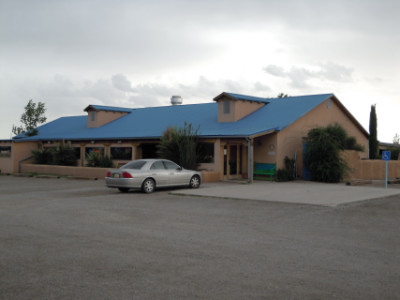 The city of Tularosa, a few miles north of Alamogordo, is not only one of the most beautiful towns in New Mexico, but it is one of the best examples of the unique culture and architecture generally associated with the Land of Enchantment. After being in Tularosa by chance on a Christmas eve and seeing the church lit up with luminarias and the celebrations of the parishoners, I now make it a point whenever possible to relive the experience if I can be in the area during the holidays.

Despite all the historical and cultural attractions of the area, though, there are surprisingly few places in this or any of the nearby towns to enjoy New Mexican cuisine. Casa de Sueños, judging from the cars in the parking lot and the mention it receives on the Internet and in travel publications, is the most popular and well known New Mexican restaurant in Otero County (with Alamogordo and Tularosa being the two major towns). By saying it is “New Mexican,” this really means that most food is served with either red or green New Mexican chiles, and it follows the standard menu found throughout the state. 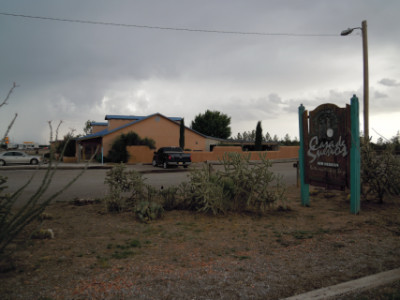 Casa de Sueños is open daily, and seems to sponsor a number of banquets, private parties, and meetings of civic groups. Do not worry, though, because the restaurant is large enough to handle customers during the peak periods as well as any special parties that are booked. 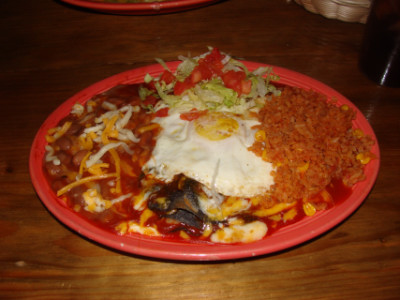 Red enchiladas with blue corn tortillas and an egg on top

Casa de Sueños stays true to the tradition of New Mexican cuisine by offering enchiladas served flat, with blue corn tortillas (optional), and a fried egg on top (this is also optional). Red Enchiladas are usually my preference, and that is how I ordered them here. The red chile contained spices and other ingredients that I call “adulterated” red sauce, but it was pretty typical of the type of red enchiladas I have found in southeast New Mexico.

What was not typical for the southern part of the state was the fact that blue corn tortillas were served in the enchiladas (these cost a dollar extra), making them close to the northern New Mexico version. They were served flat by default (usually I have to request them this way in the southern part of the state), so overall they were very good compared to other New Mexican restaurants in the region. Flat enchiladas are my preference because they seem to absorb more of the sauce and thus more of the flavor than ones served with rolled tortillas.

I was hoping for a red sauce that used a more pure red chile, but there was enough red chile to give it a good flavor. Everything else in the enchiladas was good (including the cheese), so I would have to say these were a good example of New Mexico enchiladas. 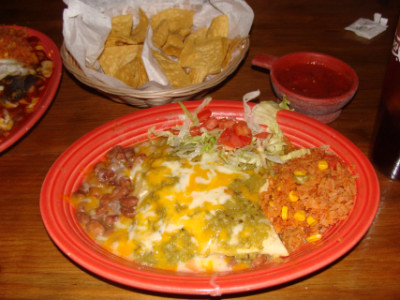 Stuffed Sopapillas are something I greatly enjoy when they are done well, but I was somewhat disappointed by the one at Casa de Sueños. The sopapilla had a good flavor, as evidenced by the plain sopapilla served as a dessert (although I think most restaurants would not serve a sopapilla for dessert after it had been eaten as a meal). A choice of fillings was available, and I thought the whole beans I ordered were good (whole beans were also served on the side). It comes with red or green chile, and the green chile I ordered was spicier than the red, but just as diluted with additives as the red chile had been. The sopapilla’s texture, though, was too heavy and not fluffy enough.

After trying both the red and green sauce I preferred the red, and I think I would have enjoyed the stuffed sopapilla more with the red sauce.

Rice
The Rice was mixed with corn and other vegetables, and was a little bit unusual for New Mexican restaurants.

Salsa
The Salsa was a high point, with it being spicy but not tongue-numbing. It tasted as if it were made with fresh chiles. The chips were thick and good.