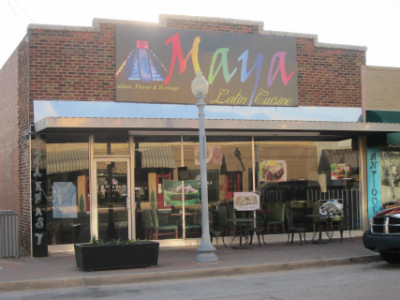 Maya Latin Cuisine opened in the same building that housed Inca Latin Cuisine, and although the Incas and Mayas are from different continents, their food traditions seem to be very similar.

There is still a substantial Maya population in Guatemala and the Yucatan Peninsula of Mexico, and this is the homeland of the restaurant’s owner as well.  Some of the former dishes from Inca Latin Cuisine, representing Peru, are served as well.  In fact, the name “Latin Cuisine” represents what the restaurant is trying to do– offer popular dishes from areas throughout Mexico as well as Central and South America.

The main thing I need to inform readers about is that Maya Latin Cuisine is not open in the evenings (this seems to be the case with many restaurants in Bethany).  It is open from 9:00 am to 6:00 pm daily except Sunday, and on Friday it stays open until 8:00 pm.

To me it seemed surprisingly upscale for a lunch place, and while dinners do not come in massive portions, they do consist of high quality meats and side dishes.

Pollo Asado
The owner is from Guatemala, and I asked if the server could point out the menu items that were Guatemalan.  It turned out to be about 20 percent of the menu– not a large number, but it points out the fact that this is a Latin American restaurant and not strictly one that is Guatemalan. 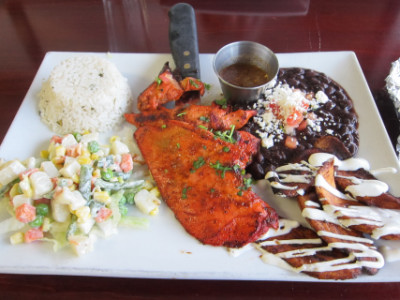 I ordered the Pollo Asado Chapin, which was one of the Guatemalan choices.  This was a marinated chicken breast with a Guatemalan style salsa coban.  I thought the flavoring was good, but the most impressive part was the quality of the chicken.

As much as I appreciate good chicken, though, the best part of the plate was probably the Plantains, which brought out the flavor that I always thought plantains could have.

The Black Beans were equally good, although this is something that is more readily available at other restaurants.

The Russian Salad was something that I could easily skip, although I did enjoy it. 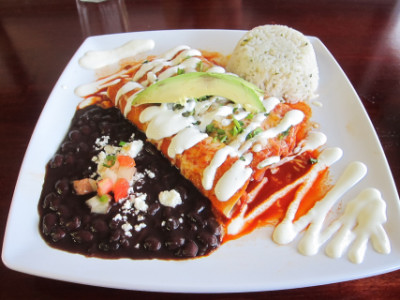 Shown in this photo is a item I sampled– the Enchiladas Mexicanas with a beef, chicken, and cheese enchilada.  I had a bite of all three, but I thought the chicken was best.

These enchiladas were not spicy, and had onions and cilantro on top.  I think they were supposed to be Yucatan style enchiladas (the area where the Mayas live), but I don’t have the experience to tell whether they were authentic or not.  They seemed to be good gourmet style enchiladas for those who do not want them very spicy.

I have been to Guatemala, and I would not rate this restaurant as being very high on the authenticity scale.  In the first place, when I was there people could not afford much meat, and they certainly would not be eating the type of meat I had in the pollo asado chapin.  However, I am always willing for restaurants to provide something better than would probably be served in their home country, and this dish quite possibly meets this criterion.

On the Mexican food, I was a little disappointed that it did not have the flavors of the old Adobe Grill, but I need to try some more items and make some more comparisons.

The thing to remember, though, is that this is not a Guatemalan restaurant or a Mexican restaurant, but one which serves Latin American food (including Peruvian).  I still need to try some more items.

I will say, though, that it is definitely worthwhile getting the plantains.