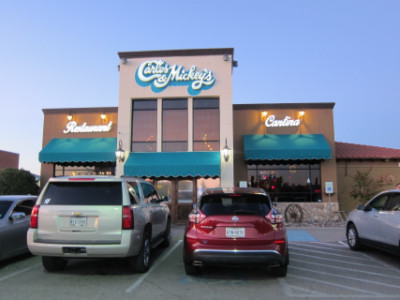 Carlos & Mickey’s is one of the city’s old-time “classic” restaurants serving El Paso style Mexican food (that combines Chihuahua style cooking with local chiles and other border style twists). There are now two Carlos & Mickey’s in El Paso plus one at the airport (usually I discount the airport locations as being an “express” version of the airport that is not as good as the original with the exception of one experience I had at LAX, so this means that you never really know until you try it).

I have eaten at the “other” Carlos & Mickey’s on Magruder for a number of years, and have largely dismissed it as a tourist trap, but my last visit was over ten years ago. Even as touristy as I thought it to be, it still had good food (I think much better than the ultimate tourist attraction of La Posta in Mesilla, New Mexico). I thought, though, that people went to Carlos & Mickey’s more for the drinks and the mariachis than the food.

The actual name of the Magruder restaurant is Los Bandidos de Carlos & Mickey’s (perhaps the “bandidos” part was a reference to the prices they charged?). In any case, for whatever reason the Montwood location is strictly “Carlos & Mickey’s.” I think this is a good thing because this is what everyone calls both restaurants, and the fact that it is listed on indexes under the “L’s” meant that some people may not have found information about it.

A second trip to the Montwood location was a little worrisome because the food was not quite up to par compared to the first visit, and they were hosting a large party as is common at the Magruder restaurant but I think this one did not have to staff to really handle it (at least this seemed to be the reason that our service was suffering). At this point I cannot really get excited about the food here although I did have very good food on my first visit. 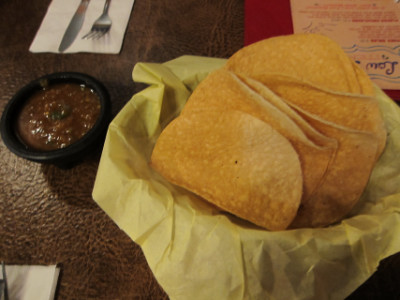 There are a couple of things I like about the Salsa here: it is spicy (not gringo style) and it does not contain cilantro.

The Chips looked like round tortillas that had been toasted, but otherwise seemed traditional and good.

I liked the fact that they paid a lot of attention to some small things that many restaurants do not, such as as the chips and salsa. 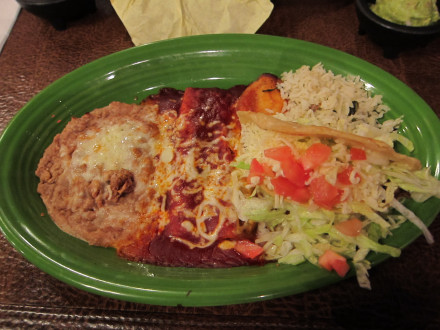 Chihuahua plate with beans, red enchilada, chile relleno, taco, rice, and guacamole served on the side

Many restaurants offer a “Mexican Plate” with a combination of items so you can try different things. At Carlos & Mickey’s they have several choices, such as the Chihuahua Plate that I have now ordered twice.

The Red Enchilada on this plate had a very good flavored red chile, and was spicy to about the “4 chile” level without being too spicy. The flavor was a little bit different than most, with a somewhat vinegary taste (I don’t know what that is about, but it was good).

The Chile Relleno surprised me by not having sauce on top. although you have a spillover effect of the red sauce from the enchilada. The Mexican cheese inside was very good, as were the green chile inside and the batter around the outside.

I the Taco comes with shredded beef, and I thought it was very good. I really thought the main factor in this being an excellent taco was the Mexican cheese.

Out of the rice and beans, I thought the beans are better (but both were good).

I noticed that there were no green enchiladas on the menu, and I asked the waiter about it. I had remembered that at the Magruder restaurant the green enchiladas were Tex-Mex style and not typical of El Paso food, but I wondered why they were not listed on the menu here. The waiter said they were called chile con queso, and that you could order an enchilada with this as a topping (this would be what I called the “green enchilada” at the other restaurant). This cleared up the mystery, although it is probably not something I will order at either restaurant.

I need to note that almost everything was as good on my second visit as the first, but the red enchiladas were the item that really seemed to suffer when the restaurant was hit by more customers that they seemed to be used to handling.

Other Items
There were not any other favorite items from the other restaurant that I did not try here except the tamales, so I would say this would be something worth trying at some point.

Drinks
When I used to go to the Magruder location they did not serve horchata, and I do not know if they have have now added this to the menu. The iced tea here is good, though, and of course they have alcoholic beverages.

Other Locations
The original and largest restaurant is at 1310 Magruder St. near the airport, and there is one in the terminal of El Paso International Airport.

Closing Comments
The “El Paso” style designation of this and other restaurants means that the chile on top of the enchiladas is spicy but not as much so as most New Mexico restaurants. I think this is a good place to try the local cuisine, particularly because they combine it with very good Mexican cheese, and the chile relleno is not smothered with the spicy chile as many restaurants do.

There is no green chile here, but instead it is called chile con queso. My recommendation would be to get this as an appetizer or side dish rather than on an enchilada, because the red enchilada is the one you would really want if you would like to try El Paso style cuisine. The Chihuahua plate I tried (with enchilada, taco, and relleno) had a very good selection of items, and was also about the right amount of food for me.

Update Nov. 2019: I was able to visit Carlos & Mickey’s in the El Paso International Airport this month, and the red enchiladas were so much better than on my last visit to the Montwood location that I thought I should add some comments about the variability of this restaurant’s food as well as change the rating. The airport restaurant has an abbreviated menu and does not have some of the choices found at the other restaurants (and of course parking can be a killer on your pocketbook if you are going there strictly to eat the food). What it did show me, though, is that the Montwood location seems to be the least consistent of Carlos & Mickey’s three restaurants when it comes to the flavor of the red enchiladas (and I thought everything else was good at the airport location as well–chips, salsa, rice, beans, etc., so this was also a very good sign). I still need to make the comment that I have not been to the Magruder location in a number of years, but I do remember it as being more consistent than what I have found at Montwood.