Casa Perico is a family run restaurant with two locations, and what I have found is that you really get the same food at either restaurant. My first few visits were to the North Pennsylvania location where I mainly found Tex-Mex style food. This was not very exciting to me so I quit going.

Some on-line reviews convinced me that I may be overlooking some of the better dishes, so I returned, but it was to the N.W. 63rd Street location. I did in fact find these better dishes and kept returning, but I do not know if these dishes had been added or if they had been there all along. My next order from the Pennsylvania location was some time later with a delivery order, so I am now updating this review.

The result is that I have had fewer visits to the N. Penn location, but I am using my experience from the 63rd Street location as a basis of making some additional recommendations. The dishes I particularly like are enchiladas de rajas, puerco verde, and the Mexican street tacos (but only the rajas enchiladas are reviewed on this page). I do certify, though, that the others are also good.

Setups
The chips and queso are good, but the salsa is seriously Gringo style. They do have a spicy habanero salsa available on request, though. This is not the best spicy salsa I have ever tried, but it is one reason I find the meals at Casa Perico good enough to keep coming back. 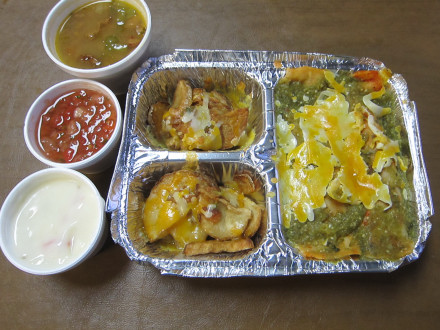 The enchiladas are listed in several sections of the menu, with the Enchiladas de Rajas listed in the “Especialidades Vegetarians” section. These are enchiladas with roasted poblano peppers inside, and your choice of either sour cream or green sauce on top. The green sauce is the part of this that is actually spicy, with “pepper” being a more appropriate term for the rajas rather than calling it a “chile.” I like the green sauce very much–it is much like the tomatillo sauce served in a number of restaurants but I think this one has a better flavor than most. The green sauce has a 3/5 spice level–not real spicy for me but it is not wimpy either.

The above photo shows papas rancheras in the two side sections of the metal container, with ranchero beans in the side container at the rear. The queso and salsa are in the other two side containers. 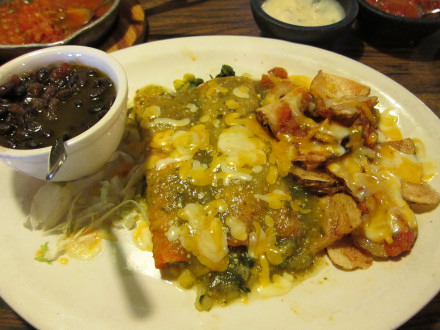 An order of enchiladas de rajas I had at N.W. 63rd St.

This is a photo showing the same dish served at the restaurant on N.W. 63rd Street. This one had the papas rancheras and also came with black beans.

Other Dishes
On one of my early visits to this location I got Chicken Flautas which I would say are very good for the local area. There were not any flaws in it except that it was less flavorful than ones I have experienced in the border region. They mixed the guacamole with sour cream making these somewhat different from traditional flautas, but they tasted good.

Side Dishes
Most of the side dishes are solid, but I particularly like the Ranchero Beans. With a spice level of 4/5 I think they are a side dish that enhances the flavor and enjoyment of the main meal. Papas Rancheras are also one that I recommend. At Casa Perico I would recommend substituting the standard rice and beans with any of the other sides because they do not charge extra for the substitution, and I think you are likely to get a treat that is not available at most other Mexican restaurants.

Some Tips
The restaurant’s specialties are marked with a parrot (perico) next to them on the menu, and this has also been a reliable way to find most of the things I really like. As far as I know, though, only the in house menus have the parrots and they are not marked on the take-home menus or on the one posted on line.

Another suggestion I would give is to ask for the hot (both spicy and warmed) habanero sauce which is free on request. The habanero sauce also goes very well with tacos.

Most of the Tex-Mex dishes here have been disappointing to me, but one exception has been the spinach enchiladas.