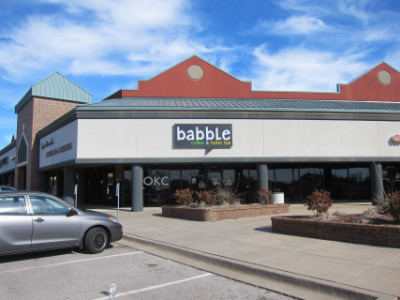 Babble Coffee & Boba Bar is a new concept for far northwest Oklahoma City which somewhat surprisingly has seemed to work. It is in the “Crest” shopping center at the intersection of Hefner and Rockwell, but is not visible from either of the major streets. The interior is a fairly good size but under COVID precautions it has been reduced to only a few tables. I can imagine that before this happened it was a bustling coffee and tea house. Even now it has a good number of dine-in customers, but it seems as if there are even more take-out orders. There are a few food items on the menu, but the largest part of the menu consists of drinks, particularly boba drinks. 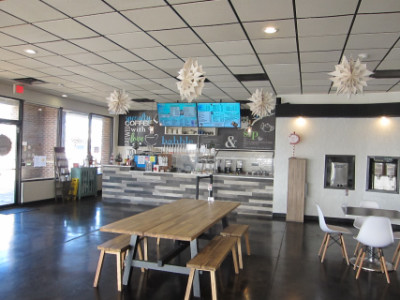 A large part of my review will talk about the ambiance because (1) I have not tried a good part of the food or drink menu, and (2) I think the ambiance is a large part of the restaurant’s attraction. There is comfortable group seating as well as places where you can be tucked away and take care of business if you are so inclined. I should point out that my food took a while to prepare, and this was not because of large crowds (as is obvious from the photo) but because the food is individually prepared and nothing is precooked. Everything here points to the fact that you can take your time and relax (I think this is part of the boba restaurant culture although I have not explored boba drinks very extensively).

The ambiance here is much like a place I visited in El Paso called Teapioca (this is a national chain with locations in the Oklahoma City area). By ambiance I mean the menu (mostly drinks although at Teapioca this is the only thing they serve), the seating arrangement, the music, and even the people who frequent it. I was going to say it attracts a younger crowd, but it is also a group which embraces Asian food and culture (a group in which I can count myself more than in the age designation). I have seen boba restaurants spread from places like Seattle into America’s heartland, and I am very glad they are being accepted as well as places like Babble seem to be. I attribute it all, though, to the fact that people like the products that are served here.

For my first visit, on a winter’s day, I opted for hot tea instead of boba (Babble has hot coffee as well as tea). I also wanted to try the food which was described to me by the staff as having an Asian flavor. There are not many menu choices–besides the tofu which I ordered, the main item served is popcorn chicken. They also have dumplings and I think other items which you can eat as a snack. 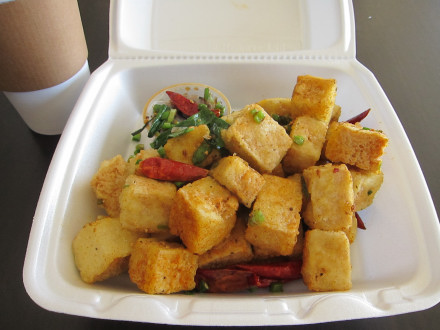 The reviews I had seen indicated that the Salt N Pepper Fried Tofu was a good choice. In fact, it was really the only choice for a good sized meal other than the popcorn chicken. The tofu had a good texture (fried on the outside and slightly soft in the middle). The flavor was spot on, and it had a slight seasoning as well as a dipping sauce made of sweetened soy sauce. There are various levels of spiciness, and I chose the one in the middle (I think you intensify it by eating more of the red peppers). I could not argue about anything here except that when I eat a tofu meal it is usually with vegetables. I got full, and the amount of food served is actually much larger than I think shows up in the photo. The sauce was excellent, and tasted somewhat like a teriyaki sauce (which I think is also a sweetened soy sauce). The staff told me that the popcorn chicken uses the same sauce (there is a different sauce used for the dumplings).

Drinks
There is a myriad of drink choices here, and at the moment this is the area on which I am least able to write. On my initial visit I tried the hot Jasmine Tea which was very good. The staff told me it was brewed with loose leaves, so to me this is the highest class of tea. It was served in a paper cup that was large enough to give me the amount of tea I normally drink including refills, and the cup kept it warm.

Other Comments
The food is not strictly Asian style as you would find it in Asian restaurants, but it definitely has an Asian flavor and is good. The sauces are definitely made by people who know what they are doing.

I really need to comment about the music, which was a key part in making this a place of tranquility and refreshment. I almost think that coming here brings you into a different state of mind, being able to temporarily forget about the cares of the outside world (or maybe it was just me). I see this as a trend in “hip” Asian restaurants and boba bars which I have experienced in places like Teapioca (a national chain) and Blu Basil (a Vietnamese restaurant in Lafayette, Louisiana). For the music, though, Babble was really a special experience.