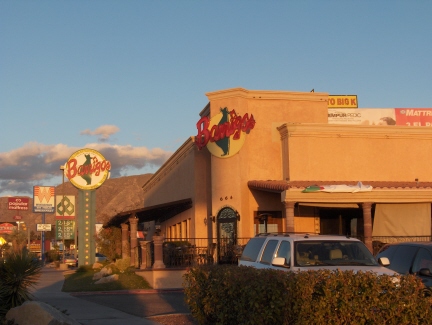 Note Jun. 2019: All of the Barrigas locations in El Paso have now closed but it is reportedly still open in Ciudad Juarez, Mexico.

This upscale Ciudad Juarez restaurant has recently branched out into El Paso, and provides some of the most authentic Mexican food around. Probably the best feature of Barrigas is the varied menu, with many items not traditionally found in the U.S. Mexican restaurants (although this type of menu variety is increasingly found in El Paso restaurants).

Barrigas seems to specialize in meat items, particularly in finding flavorful ways to combine meat, cheese, and other ingredients. It is also a good place to go if you like a variety of salads, appetizers (such as queso fundido), desserts, and shrimp. Margaritas and other drinks are served.

The background noise and music at Barrigas can sometimes be at such a high level it is hard to hold a conversation. When they have had live mariachi bands, though, the quality of the music has been such I have not minded the temporary inconvenience in trying to converse with others at the table.

Chips and Salsa
The Chips are somewhat greasy and the Salsa has sometimes been too spicy with jalapeno peppers, but the salsa seemed to improve a lot starting about 2006. In fact I would say it is now very close to the classic El Paso and Ciudad Juarez style salsa that is spicy and flavorful, and perhaps a little heavy on extra spices that are thrown in.

The Pico de Gallo that is sometimes served in addition to the salsa is quite good, but it is usually not offered.

Enchiladas
The Red Enchiladas are good, but they are not my favorite in El Paso and I prefer them on a combination plate with other items. While they are a good example of Ciudad Juarez style enchiladas, I prefer the New Mexico style chile that does not have as many spices that modify the flavor as the Mexican style red chile. These enchiladas may be more suitable than the New Mexico style, though, for people who do not like them extremely spicy. 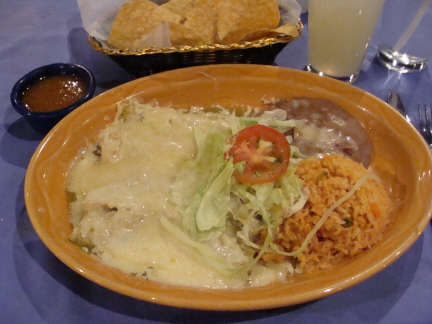 Green Enchiladas are made with puréed green chile that is normally very easy to make too spicy and not very flavorful, but the ones at Barrigas are an exception. I find the green chile here to have a flavor that is very similar to the New Mexico style green chile, although milder. These enchiladas also use melted Mexican cheese on top of the chile as well as inside the enchilada, adding to the flavor and making them among the best green enchiladas in El Paso. The green enchiladas seem to taste better with chicken inside and a side order of sour cream to make Enchiladas Suizas, not on the menu as such but is one of the better versions of this dish.

Flautas
Flautas here are well above average using thick, flavorful chunks of chicken and a large quantity of guacamole in which to dip it.

Mole
Chicken Mole is served the traditional Ciudad Juarez style, with chicken mixed into the mole, and Barrigas is one of the best. The mole sauce is not too sweet and I think has a very smooth and delicious taste. Some say mole is an acquired taste, but the one here is a good place to start if you want a more authentic version. 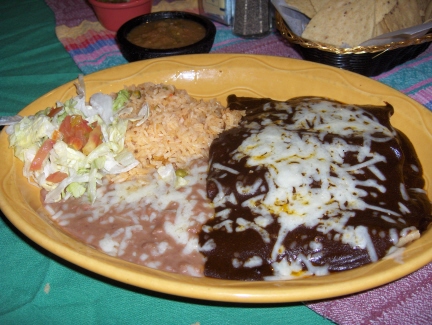 Enmoladas, or mole enchiladas, are a way to enjoy the sauce without the chicken (enchiladas are served either with cheese or chicken). With a side order of flour tortillas I really like the mole sauce just as well as on the chicken dinner. To me, though, the enchiladas have a strong corn oil flavor that makes this a less desirable dish than the chicken mole dinner. I am tempted to go on a rant here about the less nutritious and less well balanced food customers frequently receive when they try to order vegetarian dinners, and this is a clear example. One alternative would be to order a mole burrito which is not fried (and would probably have little or no corn oil). In my opinion, though, the best flavor comes with the chicken mole dinner. Mexican food seems to be at its best when you order it with meat.

Chile Relleno
The Chiles Rellenos have been quite greasy at times but other times have been quite good. The yellow tomato sauce served on top of the relleno is flavorful. For the most part I would recommend against ordering it here–other restaurants have much better rellenos. 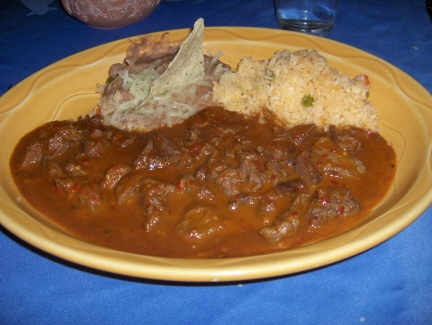 Puntas de Filete is a dish of sirloin tips that is served with a choice of several sauces. I enjoyed it not only because of its flavor, but because it is something that is not served in a great number of restaurants. I suspect all the sauces are good, but if you have a hard time deciding I think the waiters will give their suggestions.

Side Dishes
Rice and beans are very good, and overall you should expect a good meal here. Barrigas does not take the time to make Mexican style agua fresca drinks, but I have been pretty happy with the food, and the prices are not bad.

More About the Restaurant
Barrigas is open late (10 p.m.) on weekdays, and later on weekends. The outdoor patio is an excellent idea to take advantage of the El Paso weather, but smoking is allowed making it unusable to me. Because of this, the usually cold air inside, and frequent loud noise, I would have to give low marks for the restaurant’s atmosphere. Still, though, it is one of the better places to get good Mexican food in an upscale setting.