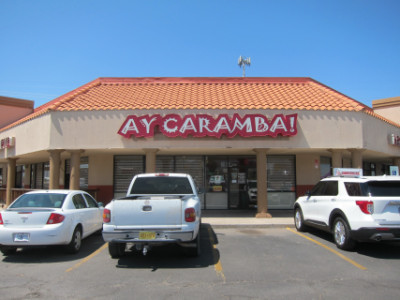 Many cities in the United States have excellent Mexican food, but in most of my experience this applies to a few restaurants while the majority are mediocre or worse. El Paso, on the other hand, can probably rightly call itself “The Mexican Food Capital of the World.” The “Mexican Food Capital” designation is because it has a Mexican restaurant at practically every major intersection and definitely on every major street. The “World” part, of course, is because this is Texas, and what else would you say being a Texan? In truth, though, I think this does apply to restaurants which even in Mexican cities, are not as ubiquitous as they are in El Paso (although most Mexican cities probably far surpass El Paso in food trucks, stands, stalls in the markets, etc.).

Every restaurant has its specialty and has certain things that bring customers back. After much experimentation at Ay Caramba I have found several favorite dishes and the things I think are its specialties (and I am sure I am still missing some of them). For me, though, the main thing is that it is one of the few restaurants that really gets the red enchiladas right. This also carries over to the tampiqueña, in which the red enchilada is one of the main elements.

I have been going to Ay Caramba! for a number of years, including the original restaurant in Canutillo (the proper way to write it is with an exclamation mark but to be completely correct it should also have an upside down exclamation mark at the beginning, so most of the time I just write it the short way). Much of the food I have tried was several years ago, and some of it was before I started taking photographs. My disclaimer for this review is that some of the food may have changed over time, although I do not think this is the case. My excuse, of course, is that El Paso has so many restaurants that I cannot get to all of them all of the time to try every item, so I have to rely on my notes to supplement my most recent visits. 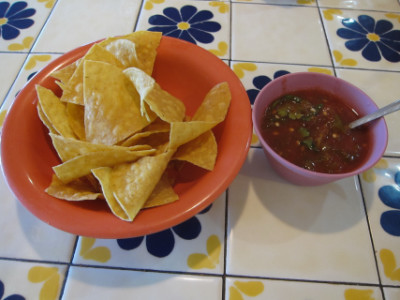 Chips and salsa are tempting enough to cause me to consume a larger portion than is advisable if I want to save room for dinner. They used to have more than one variety of salsa available, but the standard one they now serve fulfills my needs with a good flavor and a nice kick. 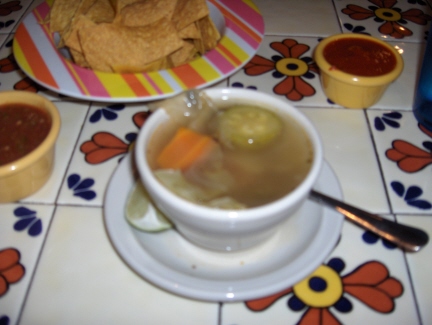 Caldo served as an appetizer

Caldo (beef soup) is a traditional border area way to eat vegetables, along with a small garden salad that is also usually included on each plate. The caldo shown in the photo used to be served as a complementary appetizer to dinners, but this is no longer offered (and most other El Paso restaurants have discontinued this feature as well). I believe it can still be ordered from the menu, though.

Queso Fundido is definitely one of the better items served, with a thick liquid cheese and just the right amount of chile. An order is rather expensive, but gives a good representation of the traditional Mexican style dish rather than the thin queso dips that are usually served free in Tex-Mex style restaurants. 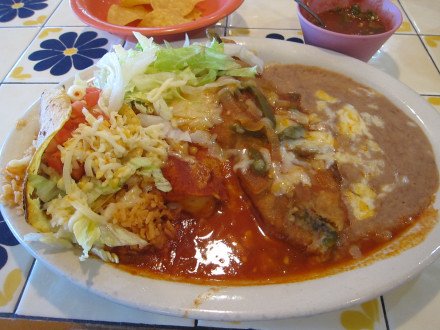 I order the Mexican plate (combination plate) at many of the restaurants I visit in order to taste several items at one meal, and also because it usually gives you a lot of food for the money. For restaurants that do not have my favorite enchiladas there are usually one or more of the other items that provide a taste treat. For restaurants where the enchiladas are particularly good I like to try other things as well, but I do not want to miss the opportunity to have one of the better enchiladas.

Ay Caramba is in the latter category where I think the Red Enchilada is not to be missed. These have a deep red color that translates into a red chile flavor with a depth of flavor that really makes them enjoyable. The additives are at a minimum, and I particularly like the fact that there is no noticeable cumin flavor. The spice level is pretty mild compared to many New Mexico chiles, normal for El Paso, and probably spicy compared to everywhere else. I give them four out of five chiles on my spice scale, meaning that the chile heat and flavor is there without being a problem for most people (even those from other parts of the country). I would rate these enchiladas as among the best in El Paso to the point that I include Ay Caramba in my list of “red chile restaurants.” One note about the enchiladas (not a criticism) is that if you let them sit on the plate too long the cheese gets hard which seems typical of the Mexican style cheese that most places in El Paso use. Thus if there is any point where El Paso enchiladas might really be better than the typical ones in New Mexico it might be the cheese (although to this point I really have not found any fault in the cheese used in New Mexico).

The next critical item on the plate is the Chile Relleno. These are perhaps spicier than the enchilada, while the sauce on top rather than being very spicy as I think would be the case in many New Mexico restaurants, actually tones it down a little bit. The style of this relleno is typical of ones I have found in Mexico, meaning that they do have very good cheese but tend to be on the greasy side. I have made no secret to the fact that I like New Mexico style chile rellenos better, but the ones in El Paso do have a good flavor–they just should be consumed as quickly as possible because of the grease.

The Taco, made with deshebrada (shredded) beef, is excellent, and to me means that it is one of the three stars of the Mexican plate (while with places that use ground beef it is usually just the enchilada and chile relleno).

The Rice is particularly fresh and flavorful, while the Beans are very good and are as flavorful as refried beans can be.On past visits I have found it better to substitute Charro Beans for them, but the refried beans are really solid and I would not hesitate to order them. 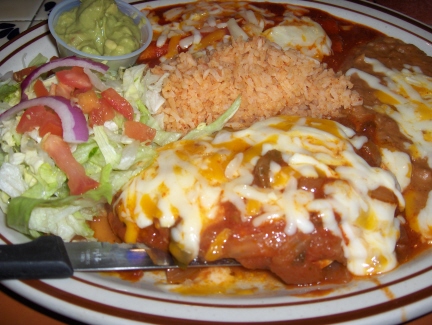 The Chicken Tampiqueña is one of the better dishes in the way it showcases the border flavors. The chicken breast meat is juicy and comes in a substantial portion. I would not call this the best chicken that is available, but it is enjoyable. The toppings of tomato sauce and a mixture of white and yellow cheese make it a classic tampiqueña style dish. This is not an extremely spicy dish, but is more along the lines of typical Southwest style food. Several side dishes are served including an enchilada, rice, beans, and guacamole. Like most of my favorite El Paso style Mexican food, the sum is greater than the parts: while the individual components are not necessarily outstanding, the overall dish is quite enjoyable. 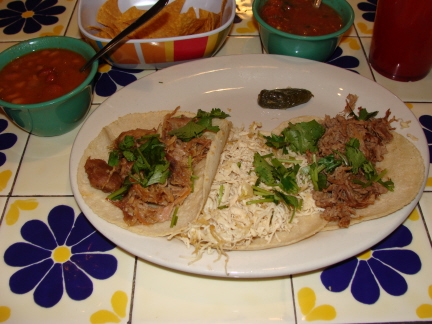 Selection of tacos with carnitas, shredded chicken, and shredded beef (with charro beans on the side)

With the restaurant’s specialty being “Tacos y Carnitas,” it was worthwhile trying the taco specials on “Taco Tuesday.” I do not know if they still have Taco Tuesday after the pandemic but this did give me a good sampling of the tacos.

The Shredded Beef Taco I tried was really more memorable than the chicken taco, and was particularly good served on a soft tortilla. The cilantro and other spices gave it a Mexican flavor that is all too often missing in restaurant versions of what is usually a food cooked at home.

The Chicken Taco had a juicy, flavorful meat, with yellow and white cheeses used as the main flavor enhancer. The seasoning was very good.

The Avocado Tacos I had on another order did not have as vibrant a flavor as the beef or chicken, but was a perfectly good way to get some vegetarian Mexican food.. It comes with lettuce and tomato that liven up the flavor somewhat, and gives a good option to the meat tacos. 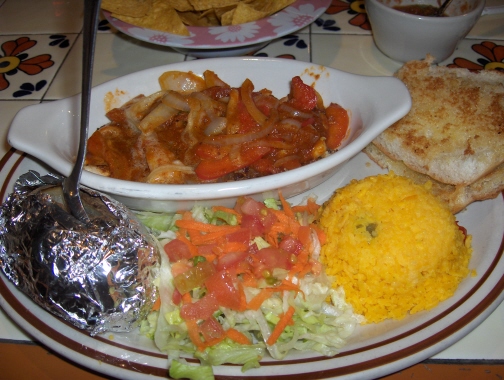 A more recent experience with the Diabla Fillet, though, had a much better result. This was a tilapia fillet with a fiery hot diabla sauce (although it was not as spicy as some I have had at other restaurants). I thought the quality of the fish was quite good, and I enjoyed the side dishes. Some other Mexican restaurants specialize in seafood, but I believe this one is competitive with them.

Other Items
Many of the best dishes at Ay Caramba seem to involve chicken and guacamole. In an effort to have a fajita dinner that was still in an affordable price category I ordered a Chicken Fajita Torta that consisted of grilled chicken, guacamole, and toasted bun. This was big enough for a meal if a person were not terribly hungry, and was very good. I was not sure why, but the chicken fajita meat seemed to be better than other chicken dishes such as the tampiqueña plate, if the main concern is the flavor of the meat. The fajitas here are not the best in the city but they seem to be better than most.

The Chicken Fajita Burrito was even better, with an excellent preparation. On my request they added some green chiles, making it even more memorable.

The Green Chicken Enchiladas I tried were very good, but they were rather bland until I ordered sour cream to add on top. Otherwise it is the typical puréed green chile that is not as spicy or flavorful as most New Mexico versions. The sour cream turns green chicken enchiladas into enchiladas suizas that are popular in Ciudad Juarez, a good use for the milder green chile typical served there.

The Chicken Flautas also use the white fajita meat, and have large amounts of guacamole and sour cream in which to dip the flute-shaped toasted tortillas with the meat inside. Like the other chicken fajita dishes, the meat is good quality, and the choice comes with the different ways it can be served.

Drinks
The Aguas Frescas including the Melón (cantaloupe) drinks are made from a mix, and were disappointing. This is quite surprising from a restaurant that otherwise seems to specialize in recreating the food and atmosphere of the typical south of the border restaurant.

In A Nutshell
This is one of my “red enchilada” restaurants where I think they are especially good (this means a deep red color and flavor without noticeable additives like cumin that could mess things up). I think the location of the original restaurant in Canutillo near the New Mexico border had an influence on the red chile used on the enchiladas (although the cheese and other factors do not make them New Mexico style).

One big strength of the restaurant is the large menu, and I think everything I have tried (even things out of my normal comfort zone) have been good.

Prices have traditionally been higher here than at other restaurants, but now every restaurant is having a hard time keeping their prices low. In this environment Ay Caramba! becomes more attractive simply because of its consistent food quality.