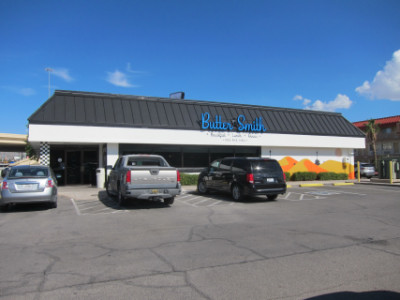 Given my passion for local restaurants, I hate to admit that at one time I not only ate a good percentage of my restaurant meals at chains, but I actually enjoyed the food. I will go out on a limb and say that at one time the food at most of these restaurants was actually good. I am not even talking about my childhood when chains really did have some of the best food, but even as late as the 1990’s some of them had meals that I really enjoyed (and some such as Harrigan’s, Steak and Ale, and others were good until the bitter end when all of the restaurants closed).

I mention this because Butter Smith is a local group that is taking over the Village Inn restaurants in El Paso and Las Cruces. Theoretically a local company will do a better job with the food, and I believe they will. I just haven’t tried the meals here yet–only the pie. Village Inn always had excellent pies, and these same pies are now available at Butter Smith. They must sell a lot of them because they had a very large display case with probably a dozen varieties available.

Right now only two of the Village Inn’s have been converted to Butter Smith–this one at Mesa and Interstate 10 and one on Zaragoza Rd. and the Interstate. I had heard that Village Inn was going out of business all over the country, and I think the model here for converting them to a local company is one they will want to do elsewhere but I have not heard about where this is occurring. I just know that people are glad the pies are still here.

I understand that Butter Smith is changing Village Inn’s menu somewhat. This is probably a good thing but I haven’t tried their food. During the past few years I can mainly remember going to Village Inn for the Mexican food, and I think it was only at the Airway Blvd. location (the Mexican food was not part of the regular Village Inn menu but it was something they did locally).

I just want to make one comment about Village Inn from my one and only experience in the past twenty years from the Mesa and Sunland Park location. The food itself was not really bad, but the problem seemed to be that the cooks and wait staff did not seem to know how to do their job or else they did not care. The food either was not heated properly or else was kept waiting for so long that it got cold before it was served. When I sent it back to the kitchen the issue was only partially resolved.

I think Butter Smith, taking over this legacy, has some good things to work with but they just need to keep the quality control. I think they are wise to only open two restaurants for now, and to go slowly in opening the others. I see on Butter Smith’s Facebook page that they have Mexican food (although it is not listed on their menu). This, at least, is something I hope I can try. 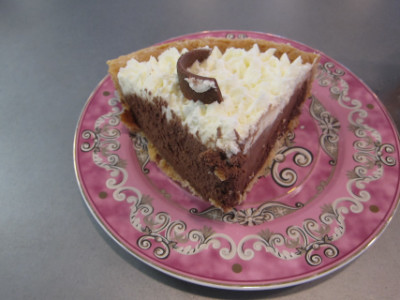 The French Silk Pie is one of several varieties that they sell. It is described as containing chocolate silk, real whipped cream, and pastry crust. Some describe silk as having a mousse-like texture without the addition of gelatin (and it takes some skill to be able to produce the silk texture). It was on the sweet side compared to pies they sell at Luby’s or similar places, and I would say that the old Village Inn pies (now served at Butter Smith) are more flavorful than most.

Other Comments
I sat at the counter where they have plug-ins for computers which makes this a good substitute for places like Starbuck’s which currently do not allow dine-in customers.

So far I have a good impression of the restaurant–it was clean and the menu looked good. I do hope this succeeds as a local restaurant chain.