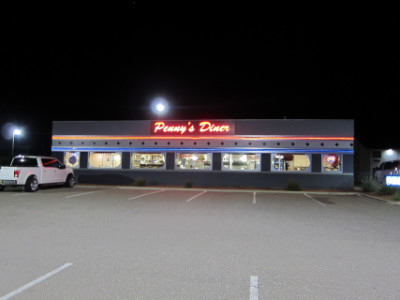 In my travels around eastern New Mexico I had originally run into the Penny’s Diner in Vaughn, and their menu made it clear that there were other locations in the state as well as several other states. In Vaughn there are not many dining choices, and that is why I was glad to have this 24 hour diner available.

For the Penny’s Diner in Santa Teresa, New Mexico the choice was dictated by being able to eat in the middle of the night rather than there not being any other restaurant choices. When faced with a choice of going to Penny’s or one of the other overnight chains such as Village Inn or Cracker Barrel the choice seemed to be very clear cut. Having eaten at Penny’s previously I thought that the food here was much more like a local diner than I would find at any of the large chains.

I did find some differences between the Santa Teresa Penny’s and the one in Vaughn. One was that in Vaughn I had ordered breakfast with New Mexico green chile on top, while the Santa Teresa restaurant did not have New Mexico chile (although they did have a Mexican style salsa made with jalapenos). Another was that in Vaughn I could not get the waitress to make any recommendations for me, while the waiter at Santa Teresa was very forthcoming about the food. What I learned was that the hamburgers were one of their biggest sellers because of the quality of the meat and the fact that some of the other food was frozen. I am not like Gordon Ramsey where I can immediately spot these things, but I did think the hamburger was one of the best I had eaten in a long time. 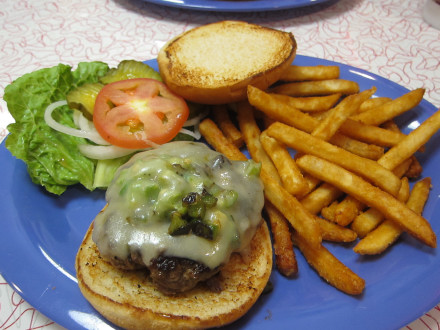 The Fiesta Burger was recommended as one that I probably would like, and I do think this is the spiciest one they have and the closest to a green chile cheeseburger. To me the best feature was the patty which tasted like chuck, so that I would have been happy with any of the burgers they served. I should explain that my mom usually made hamburgers with chuck, and several restaurants in Oklahoma City use this type of meat so that I know it when I taste it. In addition, though, it tasted like it had never been frozen.

I was surprised at how well the toppings came together when this was not a traditional green chile cheeseburger. What they use here are pepper jack cheese, jalapenos, fiesta ranch sauce, lettuce, tomato, pickles, and onions (I used everything except the onions).

The Fries were also done very well, and overall I was very happy with the meal.

Penny’s is located near the Santa Teresa Airport just off of the Pete Domenici Highway (or State Highway 136 which is an extension of Artcraft Rd. in El Paso). It really seems as if it is out in the middle of the desert but in fact it is a fairly short trip for those who are in the west side of El Paso.

One thing I noticed here was that they use paper straws, something I enjoyed as well as a step in saving the oceans (even though I think almost all of the Penny’s locations are nowhere near the ocean).

Another item I might like to order in the future is their whiteboard special–the tacos (either beef or chicken). This is a demonstration of how each Penny’s has its own menu items in addition to the standard menu listings. They explained that the tacos are very popular with the railroad workers who come through here on one of their scheduled cross country stops.

As far as I know the best choices here would be the burger or the tacos, but I would not be surprised if they had some other good options as well.