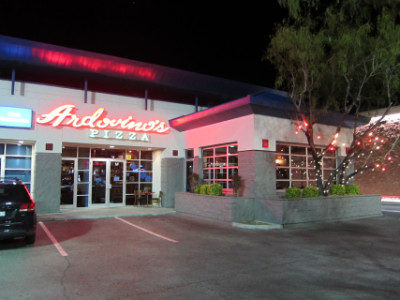 Ardovino’s advertises that it serves gourmet pizza, and I would have to agree that it is hard to beat for its fresh toppings and delicious combinations of ingredients. If your preference is vegetarian pizza I think Ardovino’s may be the best place in town for the variety and quality of non-meat pizzas that are served. Meat toppings have been excellent as well.

The restaurant on Resler Drive has been around for a number of years, but the original Ardovino’s on Cincinnati Avenue has been operating as long as I can remember. I understand Ardovino’s Desert Crossing in Sunland Park, New Mexico has a connection to the other restaurants, but it does not primarily serve pizzas. 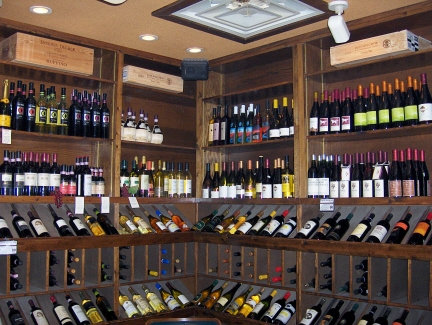 A sample of the wine selection

Ardovino’s is upscale without being stuffy. It is clean and provides a good meal, but it is also casual. The restaurant has an impressive beer and wine selection, but it is very family friendly. It used to have a very large selection of Italian food items, candies, and cooking essentials for sale and displayed around the restaurant on its shelves, but it has since been drastically scaled back (I think some of it has been replaced by a larger selection of wines). Probably my biggest disappointment about this restaurant is that I can no longer get the very good quality pasta and spaghetti sauce that I used to use for home cooked meals.

The non-pizza items on the menu are pretty limited, although a few things I have tried have been very good. Generally, though, I think its forte is pizza.

The pizza crust, cheese, and sauce are all good, but what really makes it special for me are the toppings. The pizza gets points for being non-greasy and less likely to cause heartburn (partly because of the spices they use or don’t use). I think the real brilliance is in the way some of the toppings are paired together, or in some cases have a flavor that make them stand out on their own. 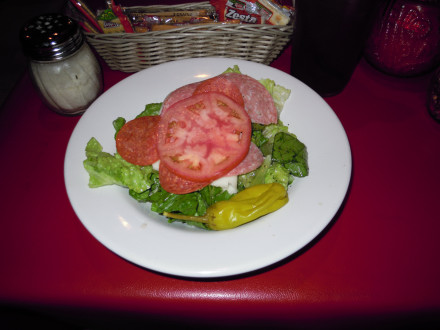 The Antipasto Salad is loaded with romaine and iceberg lettuce, cheese, and pepperoni. A large portion of Genoa salami is served, demonstrating why Italian meats are generally considered some of the best. The olive oil based dressing is great, and the entire salad is very good. It is on the expensive side, but I consider it a bargain compared to just about any other salad available in El Paso for a similar price. 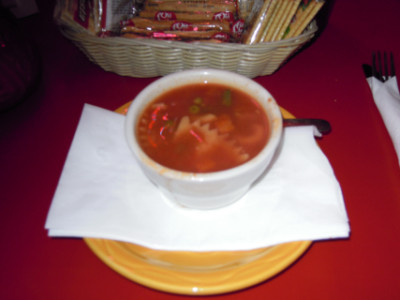 Minestrone Soup is enjoyable either with a sandwich or as an item that can be ordered separately with other meals. The soup is full of fresh pasta and vegetables, with no meat (although the menu says the broth is a tomato and beef base). The vegetables have always tasted fresh (as in not having been frozen), but I thought the pasta was the real high point of the soup. On one of my latest visits the soup tasted salty, though.

Pizza
Specializing in pizzas, Ardovino’s does a large take-out business. The pizzas here may suffer more than usual in transport if they are not consumed right away, but I think that is because they are fresh and are not filled with preservatives. Even though eating in the restaurant may involve the extra expense of drinks and tip, this seems to be the way to experience the maximum quality of the pizzas.

Ardovino’s offers four categories of pizza, each available in a small, medium, or large size. I have always appreciated the fact that every pizza served is available in the small 10 inch size (to save both calories and in the budget). Like all pizza restaurants I have seen, the larger sizes provide a better value per dollar spent, but the small pizzas at Ardovino’s seem to be a better bargain than can be found elsewhere for similar pizzas.

Ardovino’s takes pride in making its own pizza dough fresh daily, and this is one reason it has built up such a loyal following over the years. Although I like to go to Ardovino’s because of the toppings, this would probably be of little consequence if the other elements were not of equal quality.

The crust has a “cracker crust” flavor, and gluten free crusts are available upon request. At the Kern Place (Cincinnati Ave.) location I once saw a truck with New Jersey license plates delivering ingredients to Ardovino’s, and I believe that one of the reasons Ardovino’s is good is because of the ingredients that they use.

Traditional Pizza
“Traditional Pizza,” the first category listed on the menu, offers a cheese pizza with the customer’s choice of topping. I have usually found these to be the least satisfying of the choices at Ardovino’s, since some other restaurants in town make cheese pizzas that I think are better. I do not minimize the fact, though, that the toppings (pepperoni, sausage, bell pepper, etc.) could make this pizza as good as some of the ones in their special categories.

Combinations
The “Combinations” include a vegetarian combination with five toppings and a meat combination with four. You can also get a house combination or “create your own” with any four toppings of your choosing. The advantage of these is that you get more toppings than you would with the traditional pizza, although I think you get a smaller quantity of each topping but just a greater number of them. 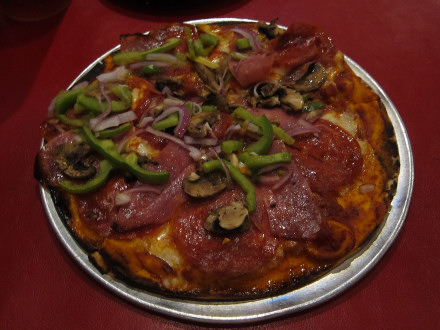 The House Combination includes some of their best toppings, and I could not do much better than this if I were making my own choices. I did not make note of whether it had a red sauce–I believe it does not but with these toppings it is probably not something I would miss.

Gourmet Pizza
The “Gourmet Pizza” category includes twelve combinations of toppings that the restaurant believes are particularly good. I really like the sun dried tomato and pesto combination, but some other ones on the menu have not grabbed my attention as ones I would really want to try (but perhaps I do not know what I am missing). 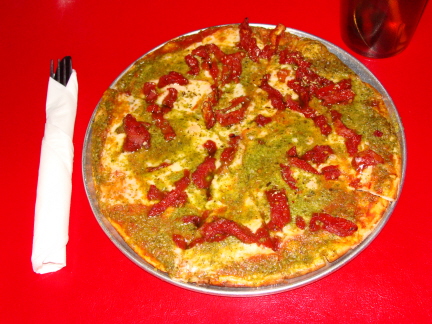 The Sun-Dried Tomato & Pesto combination may be the pizza I have ordered most often here, and it is excellent.This has a red sauce that is not spread very thick but is quite good. The cheese on this pizza is excellent. I think Ardovino’s is the restaurant that introduced me to the elevated flavor of sun-dried tomatoes over regular tomatoes, and it is probably the main reason I really like this pizza. Pesto is something I like in combination with the right ingredients, as is the case here. 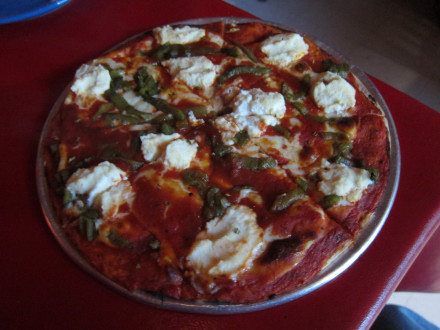 For me the Green Chile and Ricotta Pizza was a big miss in terms of flavor. The green chile was not very spicy but had a good flavor. The best flavor was on the parts that just had the green chile and no ricotta, so in the future I might try to experiment with green chile combined with other toppings (or probably just the green chile by itself would be good).

The other combination I liked a lot was the Spinach & Garlic, although I do not have a photo of it (I think I ordered it in the days before I had this blog).

House Favorites
I have found the “House Favorites” to really have the greatest number of good pizzas if I am leaving it up to the restaurant to put together a combination. The advantage of this is not only that they do a good job in picking the toppings, but also that the cost comes out lower than if you build your own pizza and have to pay for the toppings separately. 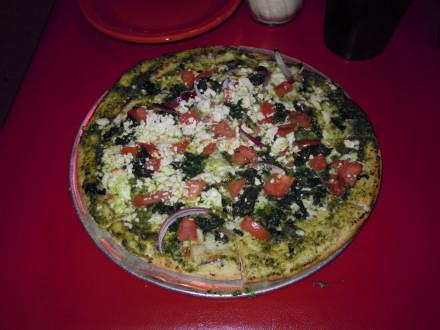 Joanna’s Pizza is one of the best I have tried, having spinach, tomato, pesto, feta cheese, and olive oil. There is no red sauce on this pizza, making it a nice change from the normal pizzas I eat. I think this pizza showcases most of the best toppings I have found over the years, and the feta cheese and olive oil bring out the flavors of them very well. 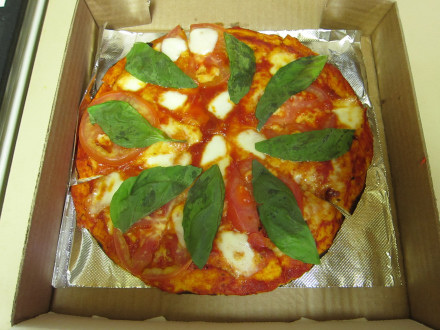 Pizza Margerita is a good choice if you want a “House Favorite” with red sauce. This pizza comes with fresh basil, and is quite flavorful. However, I did not like the tomatoes as much as the sun dried tomatoes available on the “gourmet pizzas” (I do think they will make a substitution, though, if you ask). 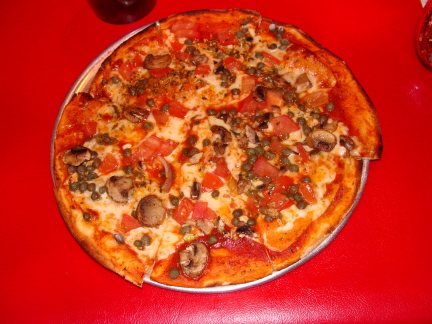 The Mediterranean Pizza comes with red sauce, capers, mushrooms, garlic, and fresh tomato, and I enjoyed it as well. I have only ordered it once, though, because I thought the garlic was a bit overwhelming. 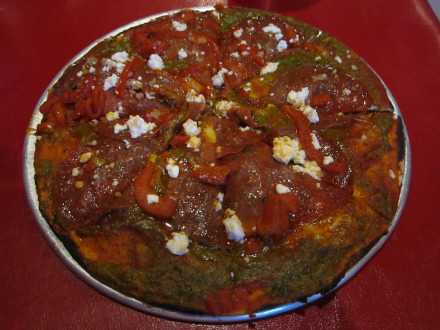 .I was told that The Woody was like Joanna’s pizza, only with pepperoni. However, it also has red sauce and provolone. This is definitely one of my favorites, but I just have not decided yet whether it is better than Joanna’s (preliminarily, though, I would say that it is).

Other Items
There is not an extensive selection of non-pizza items, but it seems that what they do have is the Italian version of street food. 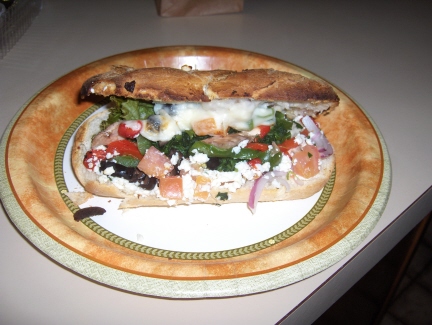 The Vegetarian Sandwich has turned out to be one of my favorite items, with homemade house Italian dressing topping it off for extra flavor. The sandwich is rather small in quantity compared to other restaurants, but I think this one compares favorably in flavor and freshness to just about anyone. Meat sandwiches are also available (and I have found several meat items on the pizzas to be very good).

Even though sandwiches are rather small, they come with either soup or salad, making a meal substantial enough for most people’s lunch, and many people’s dinner (including mine when my hunger is not greater than normal). 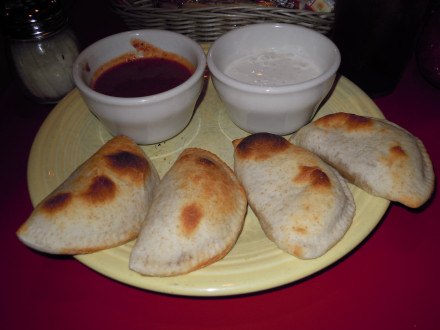 The Calzones were made with pizza crust, and the other ingredients were inside instead of on top. Inside were pepperoni and cheese (which I think was the default) although the menu says you can create your own with the toppings listed on the pizza menu. You dip it in the marinara and ranch dressing that they supply. I am not ready to say this is better than the pizza, but it may be almost as good (if you get the right fillings). 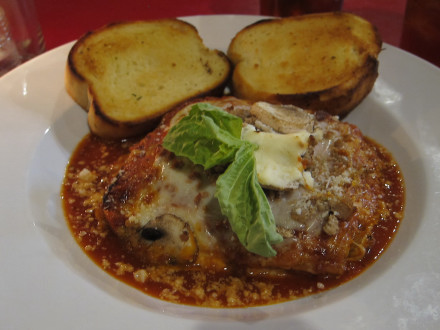 I got the Meat Lasagna because they do not have a vegetable one, and I did want to see how this one tasted. I thought it was over spiced (which was surprising because the pizzas are not this way). I was also surprised that the meat was Italian sausage rather than ground beef, although the sausage was also ground. One of the best parts of this dish was the white cheese on top that I think gave it very much of an Italian flavor. The sauce was also excellent, and may be a reason I would want to order this dish again.

Additional Comments
With Ardovino’s I believe much of the enjoyment of someone’s experience is in the toppings that they choose on the pizza. I believe they have some of the best toppings in El Paso, and for first time customers I think picking one of the House Favorites is a good choice.

Although I do not really like the red sauce here any more than at most other pizza places, it is usually the way I like to eat a pizza. One thing I like about Ardovino’s, though, is that they have excellent pizzas that do not have red sauce while this is almost never the case at other restaurants.

Ardovino’s non-pizza items have not been my favorite things here, but they have all been solid and something enjoyable. The selection is small, though, compared to most Italian restaurants.