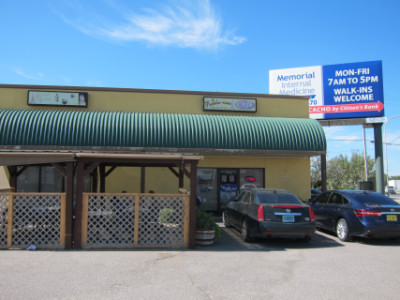 Although Las Cruces is about one-eighth the size of El Paso, there are several cuisines and food experiences offered here that are not available in its much larger neighbor some forty miles to the south. One is New Mexican cuisine which, as far as I know, is available in El Paso County but nowhere within the El Paso city limits. A Bite of Belgium in the City of the Crosses was a great find for me because it not only has cuisine that cannot be found in El Paso, but also was the cuisine for a good part of my family before coming to the United States.

Le Rendez-vous is a Las Cruces restaurant that does not really have a counterpart in El Paso. There is a national chain in El Paso that serves French food, but I do not think it offers the same experience in terms of flavor or menu selection. There is also a local French restaurant in the Sun City that is very upscale and only open in the evenings (the opposite of Le Rendez-vous that closes at 2:00 p.m. and which I think is best known for its breakfast and pastries).

All I can say is that based on my experience at other French restaurants in El Paso and in other cities, I was not expecting the food here to be as good as it was. It completely blew me away, and reminded me of some of the fine dining restaurants I have visited in cities like Seattle (although none of them were French). Because Le Rendez-vous seems to specialize in country cooking and is not trying to impress people with “fine dining,” I suspect that I will not only enjoy other items equally well but they will also be well within my budget.

One thing I would caution about, though, is that the restaurant is small. My first visit ordering from the menu was on a Sunday, and it quickly got to the point that there was a waiting list for a table (and I believe some people gave up and went elsewhere). Sunday is popular because they serve breakfast until 2:00 p.m., and have the lunch menu available as well (it is served from 11 am until 2 pm). During the week only lunch is served after 11:00, so at least I think any waiting line will not be as long.

I had come here several times for pastries before my first dine-in experience in 2021. One change I saw in 2021 is that they now have an outdoor patio which is suitable a good portion of the year weather-wise, and does provide some additional tables. 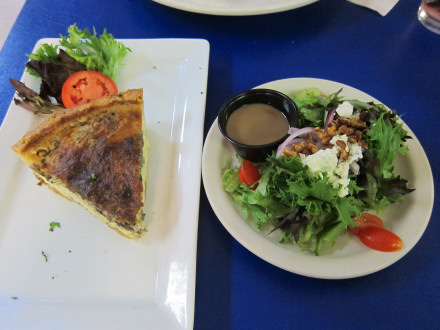 Quiche with side salad

The breakfast menu is served until 11:00, or until the 2:00 p.m. closing time on Saturday and Sunday. One item on it is La Quiche de Jour on which I was able to try the Quiche Provençale. It was advertised as having mushrooms, olives, and garlic, although none of these were overwhelming. I thought the flavors blended together very well, the dish showed expert cooking skills, and they knew what they were doing in preparing the crust (this is an element I find lacking in a great number of the quiches I have tried in the past). The owner told me that the Quiche Provençale was an especially popular version but I thought the quiche itself was good enough that I would want to order any of the versions they prepared. I did really enjoy the flavor of this one, though.

The quiche comes with optional side dishes out of which I chose the ordinary sounding Side Salad. It turned out, though, that this was a totally impressive salad with so much flavor it seemed as if it was straight out of the garden. It had one of the most expertly made dressings I have ever eaten, and it even exceeded the salads I have been eating in El Paso at upscale restaurants such as Crave and Ripe. The only thing most other salads have that this did not was cranberries, but I really did not think this salad needed them or any other addition to what seemed like a perfect presentation of a salad. 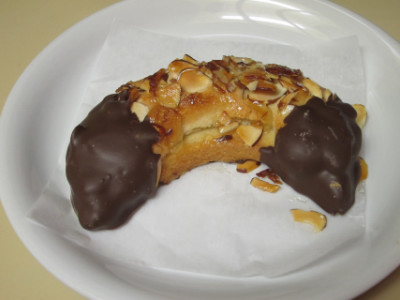 The bakery items at Le Rendez-vous are on the expensive side but also very rich so that they go a long way. They do have some items, though, which are less rich and less expensive, such as the Almond Crescent. I just think of these items as ones which I can eat all at once, but even the crescent was one that was so good I wanted to save some for a later time. It is not terribly sweet, but the chocolate, nuts, dough, and almond paste filling make a very nice treat. 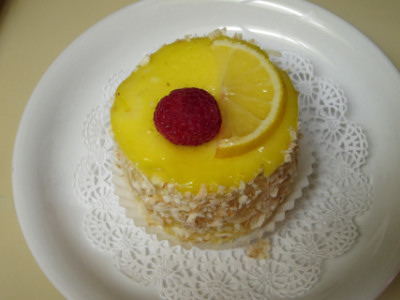 The Lemon Tart was my favorite of the items I tried on my first visit in 2017, and also the one I cut into the smallest pieces to make it last a long time. This had a strawberry filling, coconut sprinkled on the sides, and a lemon topping. The balance between a sweet and tart flavor was quite nice, and I was a little surprised about putting lemon and strawberry flavors together (but it really worked). 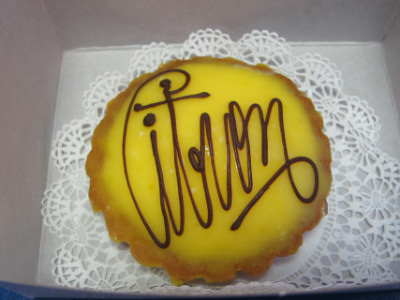 New version of the lemon tart

Although hard to read, the “Citron” is the new version of the lemon tart they have served since 2018. It does not have a strawberry filling and in appearance is almost completely different from the old one, although the lemon flavor is just as good as before, and it is still one of my favorite items out of the bakery section. The best way to describe it is to compare it to the best lemon pie I have ever tasted. 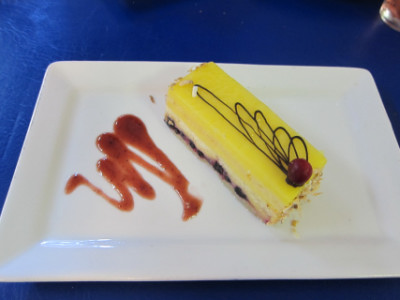 Although they do not serve lemon pie here, they do have a Lemon Cake. This is a very small version of a cake (but still large enough that I can split it into several servings). It had coconut at the ends, and was like the original lemon tart in having a fruit filling (but in this case it is blueberry). At this moment it is my “other” favorite pastry (besides the lemon tart). 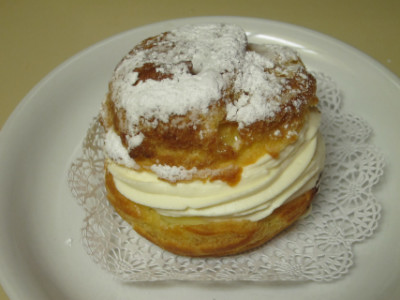 The Cream Puff had a strawberry filling, but there was more than in the old version of the tart and it included whole strawberries as well. The cream was very rich, and I also thought this was an excellent pastry. 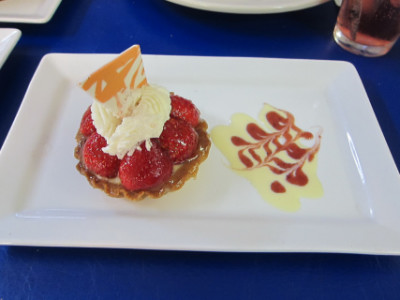 If you are really more hungry for strawberries the Strawberry Tart is a very good choice, and the whipped cream that comes on it provides a good flavor contrast. The most impressive thing, though, is that I do not know why I cannot find strawberries anywhere that are as fresh or flavorful as the ones they serve here. 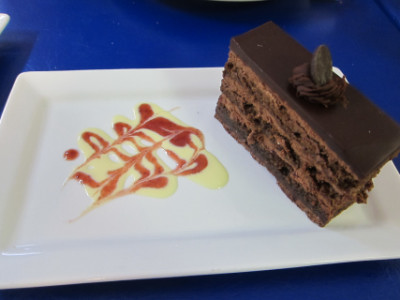 The Chocolate Cake is the only dessert for which I do not have any superlatives to describe it, but I will only say that it was very good. I am not disappointed in it–it just was not as exciting as the other desserts I tried. 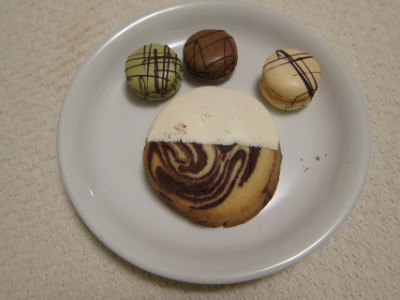 Sables are a best seller here, and are very good to take home because they have a fairly long shelf life. All cookies have a chocolate swirl, in addition to half of it being covered with either more chocolate or a white frosting (as shown in the photo). The Macarons also make good snacks or desserts. 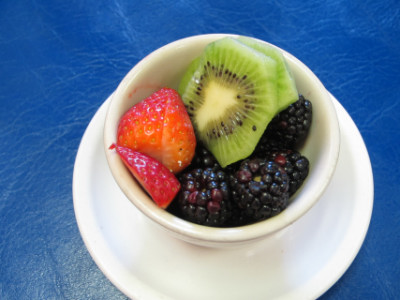 The fruit cup makes a very good snack or side dish (and I am really impressed with the freshness of their fruit).

Other Comments
They have specials during the week that may include Cajun (such as shrimp etouffee), French dishes not on the menu, or other dishes (they seem to have beef stroganoff quite a bit).

The Quiche Provençale is apparently one of the restaurant’s most popular dishes, and this version of quiche is not available every day (thus I am being a little bit conservative on my rating of the restaurant). I have found a freshness and consistency of quality, though, in everything I have tried, so I am confident that there will be other standout items on the menu that I have yet to explore.