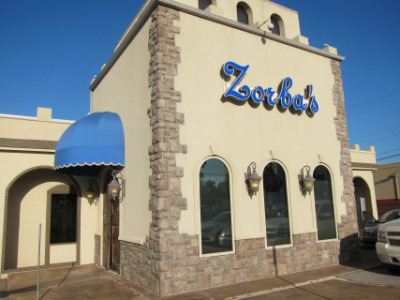 Since Zorba’s opened in 1991 it has been one of the city’s most popular restaurants for Mediterranean food. With recipes “from Cyprus to Spain” (according to Zorba’s menu), the name “Mediterranean” is very descriptive.

Zorba’s began in a small building near the Mayfair shopping center (where Sheesh Mahal is now located), and moved to the present location in 2007. The new building is much larger, with a bar and some big screen TV’s that are usually tuned to sports or news (at a low enough volume, though, so it does not disturb the conversation). Additional cooks at Zorba’s can serve a larger number of customers, and I think the menu now offers more items.

I thought when the new restaurant opened it got off to a rocky start–with the additional cooks hired to operate the new restaurant and larger menu there were inconsistencies in the food that were not there before. Some of the new items were a “miss,” but mostly I just didn’t know what was the best thing to order any more.

My current thinking is that if you want Middle Eastern food there are other restaurants in town that do it better, and there is a Moroccan restaurant a couple of blocks north of Zorba (so that is a logical place to go for that type of cuisine). Having said that, there are a number of items that I really like at Zorba’s (including a Moroccan dish), and Zorba’s also excels as a place to bring a large group who want to order different types of food. I have raised the rating of Zorba’s from my earlier reviews because I want to highlight what it does well rather than things I have found to be disappointing (many of which I am now attributing to the “growing pains” it had when it first opened).

Salads and Appetizers
Since salads are one of the better items I will start here. Several choices are available, and a salad or soup comes free with most dinners. Unlike Mexican restaurants where queso and sopapillas are usually served “free” (but built into the prices charged), the “free” appetizers here are definite enhancements and really do not jack up the prices to levels that are too high. 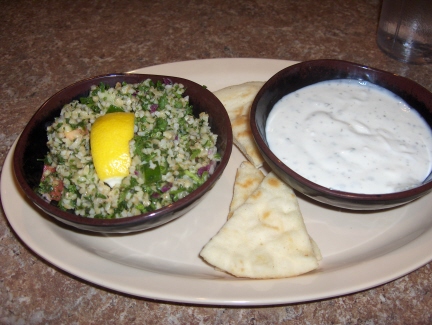 Tabouli is one of the choices available as a free appetizer, but the one here is not my favorite in town. I found it to be rather skimpy on the green vegetables, and even though the flavor was good I would prefer one with less bulgar and more vegetables and herbs.

The Greek Salad (another one of the free salads) was very good when I ordered it several years ago. I have heard from readers, though, that Zorba’s is now including fewer olives and other enhancements to the lettuce. 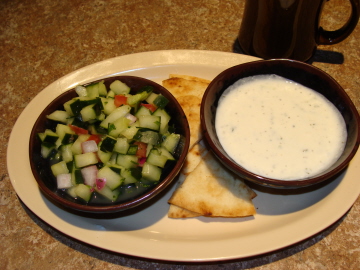 The Persian Salad seemed rather simple, but it was fresh and flavorful. I would say this is a good choice, and is my favorite of the three free salad choices. 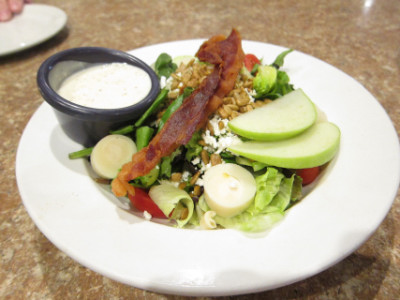 Zorba’s Signature Salad is not one of the ones that comes free with the dinners, but I think is the best one I have tried (and ranks among the best in OKC). The photo shows that it has just about every ingredient imaginable, but also it is very fresh with a good flavor. 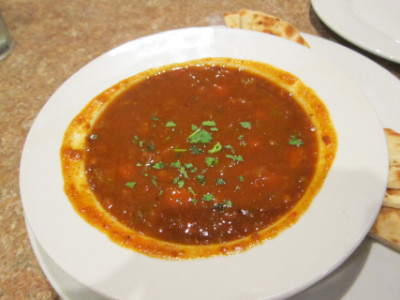 Soups are also one of the free appetizer choices with some of the dinners, and there are three choices on the menu. The menu describes the lentil soup as “seasoned to perfection and cooked with the freshest ingredients.” I would say they are correct on the second part but I disputed whether it was seasoned to perfection (I think the soups at Nunu’s and Camilya’s are better). 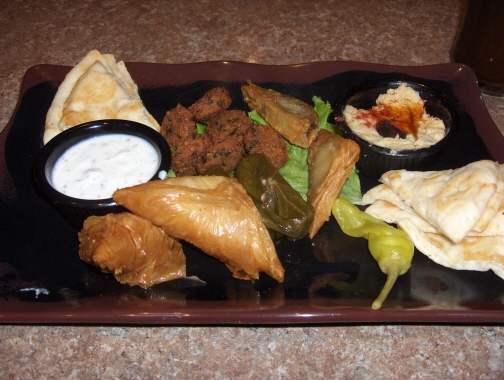 On an early visit I ordered a Vegetable Sampler that includes dolma, falafel, spanakopita, tiropita, hummus, baba ghannouj, asparagus, and salad. I thought this plate was not filling enough to make a meal, but it is now served as the “Hospitality Sampler” with some additional items. Mainly I wanted to see which of the vegetable side dishes were the best.

Dolma, or grape leaves, was one of the best items on the vegetable platter. It had a fresh, mild flavor, and was even better when dipped in the yogurt sauce that was provided.

The Falafel was the only fried food on the platter that I thought was at the level of quality I usually find in good Mediterranean restaurants. I could not tell if it was made from scratch or from a mix, but it had a good flavor. Again, the yogurt sauce helped.

The Tiropita (cheese pie) and Spanakopita (spinach pie) were fried, and somewhat of a disappointment. The spinach pie had a fried crust that I thought was too greasy, and the spinach was not spiced as well as I have had in other places. The cheese pie seemed lacking in flavor (in the photo the spinach pies are on the lower left and the cheese pies are to the right of the falafel).

The Pita was very good, and I think is something for which Zorba’s is known.

Hummus was very good and possibly one of the better ones I have eaten (although a pretty small sample came on the vegetable platter). 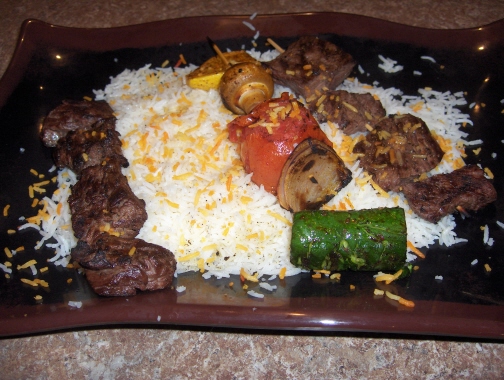 The Shish Kabob Platter seemed to be one of the few meat dishes that contained a balanced amount of vegetables along with the meat. This is good if you like rice, since it comes on a large bed of white rice. The vegetables on the skewer, though, seemed rather flavorless compared to most shish kabobs I have tried. Out of the tomato, onion, potato, squash, and mushroom, I cannot think of anything that really stood out. I really think Zorba’s could do better with their vegetables.

The meat on the shish kabob was all right but I thought it was not very tender. The flavor was OK but I have had better at other Mediterranean restaurants. 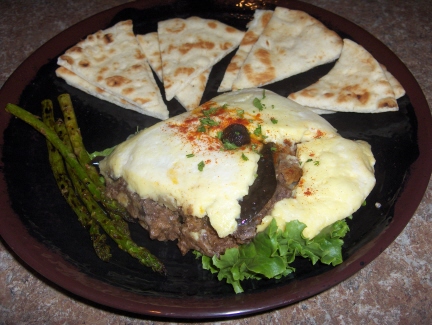 Moussaka seemed to be one of the better dinners served at Zorba’s, being a Greek dish I have not found even at some of the city’s Greek restaurants. I enjoyed the one here, and thought it had a good flavor. I am not saying Zorba would be proud of this dish but I think he would at least be happy. 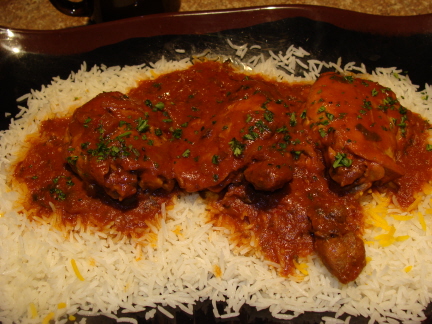 The chicken dishes point out both my enjoyment and frustration with the food at Zorba’s. Chicken Bandarri was a serving of three stewed chicken thighs with a tomato garlic sauce over a bed of basmati rice. The highlight was the chicken, and I really ordered it because so few restaurants offer dark meat chicken by itself. The sauce was not quite as flavorful as I had expected, based on experiences at a number of Middle Eastern and Mediterranean restaurants. The rice came in a quantity that was way more than I could eat, and in fact I thought the entire dinner was too big and I had to take one of the chicken thighs home. The rice was also dry (but I really would not say the same thing about the chicken). 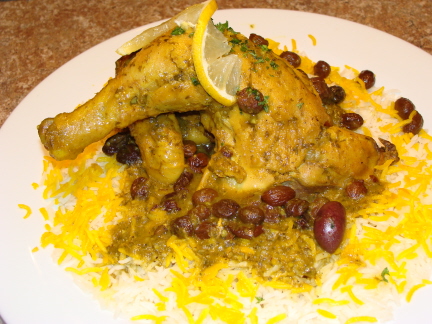 Moroccan Chicken is another chicken dinner available, and this one provides slow cooked chicken with Moroccan seasonings, a lemon olive sauce, and basmati rice. This was the opposite of the chicken bandarri in that the Moroccan chicken had an excellent sauce but I thought the meat was a little dry. Cous Cous Cafe a couple of blocks from Zorba’s specializes in Moroccan cuisine, and normally I would not think to order this type of food at Zorba’s, but in this case I think the Moroccan chicken is something that is quite good. The fresh raisins and olives added flavor, and I thought the sauce was done very well. This was certainly one of the “hits” I have found at Zorba’s (and the meat was not dry enough to really make a difference). 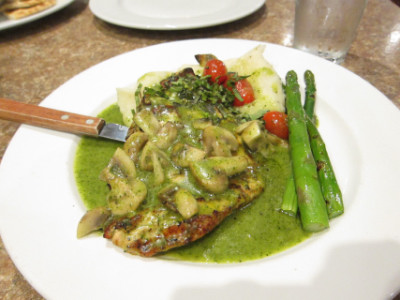 The Catalan Chicken was served with a flavorful basil butter sauce, and I thought the garlic mashed potatoes were flavorful. This stuck in my memory as being one of the two best meals I have had at Zorba’s (along with the Moroccan chicken). 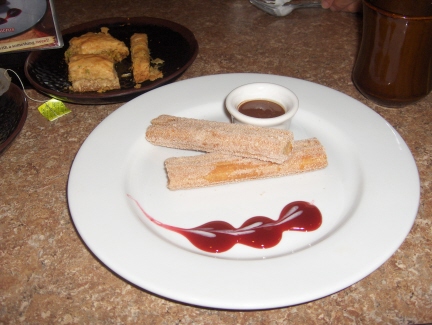 The Baklava was not the best I have tried, but several types of Mediterranean style desserts are offered. I liked everything I tried, including the baklava.

The original Zorba’s offered Persian tea (either hot or cold) on the house, and I thought this was a very nice touch to the meal. The tea was discontinued at the new restaurant, but now hot tea is available at an additional price. This is not the same tea served at Cous Cous Cafe with sweetener mixed in, but it is good enough for me to enjoy (and is a lot better than the drinks that were offered when Zorba’s first moved to its new location).

There seem to be more items on the menu than previously, and even though I have been disappointed in some items I usually find others that I like. The prices are a little high at Zorba’s but not outrageous compared to other restaurants. It is a good family restaurant with lots of tables and something on the menu for everybody. 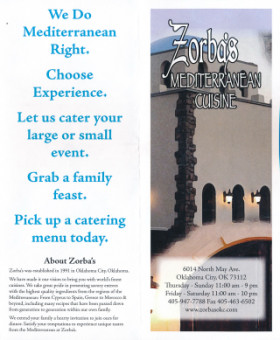 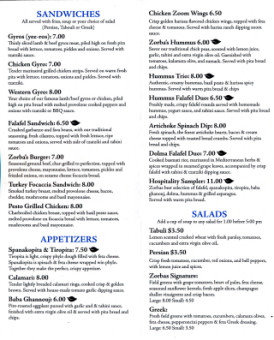 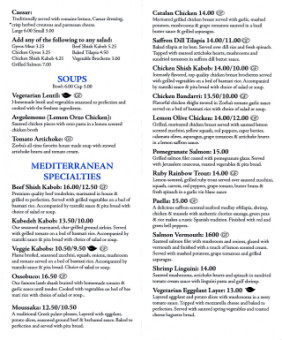 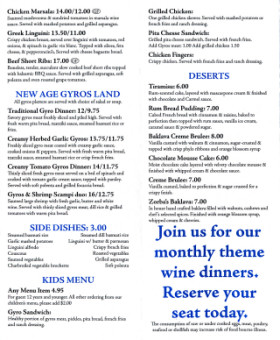