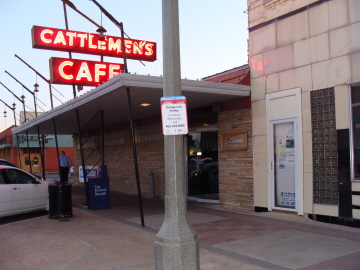 Cattlemen’s Cafe at the Stockyards

Probably a stereotype easily evoked in people’s minds about the Sooner State is one in which western garb is the accepted mode of dress and cowboys may be seen sauntering along the dusty streets into the sunset. In the Stockyards section of Oklahoma City, this perception is not far from the truth. For most of the twentieth century, and into the present one, Cattlemen’s Restaurant has been a gathering spot not only for those who make their living from various aspects of bovine husbandry, but also for locals and tourists who feel more comfortable in a down home cafe than in the typical fancy steak house in which boots and a cowboy hat would seem as out of place as country and western music over the piped music system.

While this reviewer generally likes to avoid “tourist traps,” a visit to Cattlemen’s is highly recommended, even if it seems that the clientele is composed more of camera laden tourists than the cowboys who have been Cattlemen’s “bread and butter” for so long. The food and service have remained true to the time when the restaurant had not gained national recognition, and it is an experience that is difficult to match, even in the cattle producing regions of the Southwest. 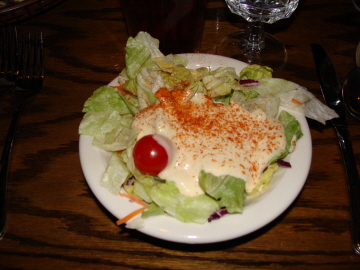 The House Salad is highly acclaimed for the creamy garlic dressing, and I found the lettuce to be about as fresh as can be expected given the transportation logistics of supplying this vegetable not normally grown in the immediate vicinity. It did seem, however, that there were too many white, pale, and practically inedible plant parts thrown into the salad.

Cattlemen’s is renowned for its Lamb Fries, served as either an appetizer or a main course. Served with a tangy sauce, they make a unique and flavorful dish. Personally, though, I did not find much that I considered special about this delicacy. I think I already have enough hair on my chest that I do not wish to regularly consume something that is purported to grow more.

Steaks
Of course, the main reason to come to Cattlemen’s is for the steaks. Several varieties are available, ranging from the highly marbled rib eye to leaner cuts such as the filet. All of the cuts taste as you may remember them from the days before mass-production cattle ranches and feed lots pumped the animals full of growth hormones and antibiotics before being shipped to chain steak house restaurants and the places offering the “$7.99 specials.” The biggest shock I received after a number of years without visiting Cattlemen’s was how much the prices had increased into the range of some of the fancy steak houses, while the second biggest surprise was how much the steaks still tasted as they did years ago.

The Rib Eye Steak is one of the recommended cuts for a special treat, as it costs a little more than some of the other cuts. Cattlemen’s features a USDA prime cut that is supposed to be the best steak available, but the regular rib eye I ordered was in the top category of my beef experience. The expertise of the cooks in preparing the meat to the red, pink, or brown level ordered by the customer is a large part of the positive experience here. Fat and gristle are removed from the steak before serving, so it would not be unreasonable for the waiter to pick up a “clean plate” at the end of the meal with only the shallowest pool of juice leftover from the steak ponding on the bottom of the plate.

The Filet is the smallest steak served, and also one of the best. The staff at Cattlemen’s recommends ordering this steak medium to medium rare, so this might be a consideration in figuring out whether or not to order this particular cut. 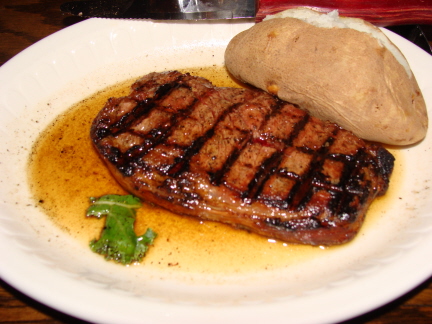 The Cattlemen’s Strip was the first steak listed on the menu, but I did not think it lived up to other cuts I have tried. This is known as a New York strip or Kansas City strip at most restaurants, and is usually a cut I find very flavorful and enjoyable. At Cattlemen’s, though, it had quite a bit of gristle and was cooked unevenly.

Back to the positive category, though, I would recommend the T-Bone as one of the better choices that are served (I shared a take-out order so I have a good idea about the taste but not how filling it is compared to the other steaks).

Side Dishes
The Baked Potato is usually as exceptional as the main dishes, but I have not always found it to be so lately. With a limited menu, the establishment has gained a lot of its reputation by producing high quality, perfectly cooked potatoes that taste as if they were subjected to the slowest cooking process possible. Of course with such a reputation there is nowhere for it to go but down if the potatoes happen to be a little “off.” I have experienced good ones over the years, but I do not know if recent experiences are an indication that the quality of the restaurant has changed. I really do not go to the restaurant enough to judge if the food is really different than it used to be. The sour cream, cheese, and bacon bit toppings that come with the potato are of a pretty standard quality, and it is really the tuber itself that provides the basis for the experiences I have had. 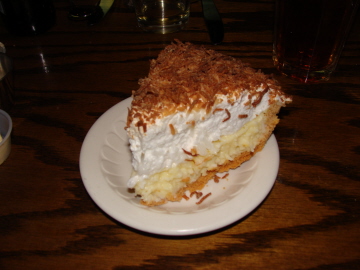 Pie is available for dessert

Cattlemen’s keeps a pie case near the front door so patrons can hardly avoid having to make the decision of whether to eat more, even though I do not think anyone ever complains about the regular meals not being of sufficient quantity. The Pie does not match the quality of my grandmother’s, but it is pretty good for ones served in restaurants.

Other Choices
Prime rib is served on weekends, and chicken fried steak is always available. Other dinners are served, such as chicken and seafood. It is not often, though, that a person would have the opportunity to enjoy steaks of the quality served at Cattlemen’s, so this seems to be the choice of most diners. While Cattlemen’s is not as inexpensive as it used to be, the “stockyards ambiance” does not require that prices be at the inflated levels that customers have come to expect at most places in order to enjoy a high quality steak.

Additional Comments
I have seen mixed opinions on the Internet about whether Cattlemen’s really has the best steaks in Oklahoma City, or whether it is mainly a matter of the history, setting, and reputation that the restaurant enjoys. My own opinion is that some of the steaks will probably live up to people’s expectations, while others may not. It seems that a really top-notch steakhouse should have cuts such as the New York strip that are equally enjoyable as the filet, and I have not found this to be the case at Cattlemen’s. Some places in OKC might give Cattlemen’s some stiff competition in the steaks, but I still think Cattlemen’s delivers what people expect–excellent steaks in a setting that may be even more memorable than the food.