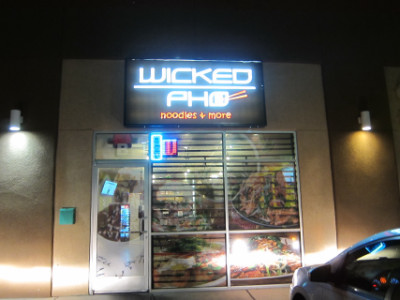 Out of a small number of Vietnamese restaurants in El Paso, it turns out that two of them (Wicked Pho and Viet) are in proximity to each other, leading to inevitable comparisons between the two. While Viet is run by Vietnamese people (I know because I met the owner), several reviews of Wicked Pho say it is not (I cannot confirm this because I did not meet the owner). The menu of Wicked Pho indicated to me that the food is Asian fusion, as some reviews also state.

The reviews of Wicked Pho are varied, ranging from five stars to very low assessments of the food. Having tried three of their items, I found the range to be about three stars to five (not the very low ratings that some had given it). It does depend on what you order, though, because some menu items are clearly not Vietnamese. Also I did not try the pho, which seemed to be the object of most of the bad reviews.

An obvious comparison with Viet Restaurant is that Wicked Pho has much fewer menu choices, particularly with Vietnamese items. Still, I liked what I ordered, and whether it is authentic or not I am glad I came. 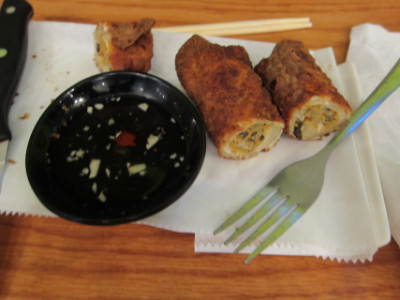 The Egg Rolls were standard for Asian restaurants, although I believe this is Americanized Asian food. The sauce did not have a flavor that stood out to me.

For me a better appetizer was the Pan Seared Dumplings, which were similar to other very good ones I have had. 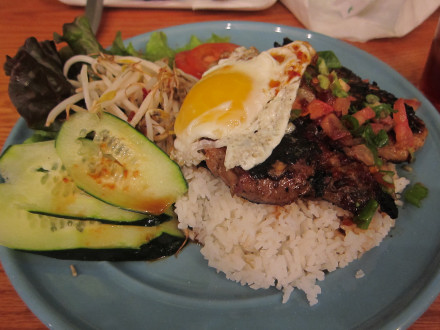 I ordered the Lemongrass Grilled Pork Chop mainly because of having few options on the menu, but this was an excellent dish that so far is the best Vietnamese pork chop I have had in El Paso. The egg and garnishes were a definite enhancement, but the meat itself was quite good. I also loved the lemongrass flavor, and I definitely recommend this as an upscale Asian food item (pork chops at any Vietnamese restaurant will be one of the most expensive items on the menu).

Tea
I forgot to take notes about the tea and therefore do not have any information about it.

An Assessment
There is a small Vietnamese menu here, but the pork chop was excellent. In contrast, many of the reviews of the pho do not make me want to try it.

The pork chop here was actually better than ones I have tried at other restaurants (such as Saigon Taste on the west side), but the appetizers ranged from good to lackluster. This makes me think that the range of reviews from good to bad depends largely on what you order.

It is hard to give an overall assessment of the restaurant, but the pork chop was memorable to me for how good it was.