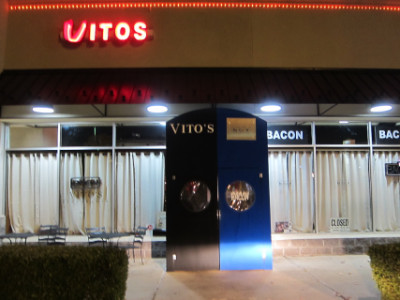 Update 2020: Vito’s has moved to 7628 N. May. The photos in this article are from the old location at 7521 N. May Ave. The food is still the same, and takeout orders are available (and are a good option during the virus outbreak when all Oklahoma City restaurants have been ordered to close their dine-in facilities). I have included some takeout suggestions at the bottom of the article. The Sean Cummings Irish Pub is now next door to Vito’s at the new location.

With Italian restaurants I generally find one or two dishes that stand out among the rest, and which I will usually order on return visits. At a few restaurants, though, the red sauce, cheese, and overall flavor are so good I can imagine that I would enjoy just about anything served, and so far this has been the case with Vito’s Ristorante.

Located in north Oklahoma City, Vito’s is among the several Italian restaurants I would have tried simply because of its proximity to me. Fortunately, though, I also consider it one of the better choices that can be found anywhere in the city.

The emphasis at Vito’s is all on home made food from family recipes. Cathy Cummings, the owner of Vito’s, grew up in a family that operated an Italian restaurant in Kansas City, and the food at Vito’s not only reflects the family’s traditional recipes but also some of Kansas City’s notable specialty dishes such as chicken spedini. The bread, sauces, and olive oil dipping sauce are all made in house, and the food is about as close to “home cooking” as you can get.

Vito’s is open for dinner only and dinner portions are quite large. Dinners come with either soup or salad, and of course bread. Smaller dinners are also available such as Italian sausage or meatballs (they are not on the menu but Cathy suggested this to me).

Cathy’s husband operates the restaurant next door (formerly an Irish pub but now a restaurant called Bacon), and the front door of the building can take you into either restaurant. The two restaurants work together on some items (such as the bread baking), and it has been interesting to see the two restaurant concepts unfold over time (I do still miss the Irish pub, though). 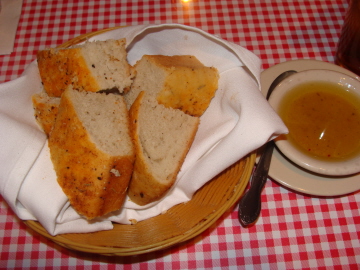 Customers begin the meal with complimentary home made Bread. This fresh bread and olive oil dip is addictive, running the risk that you will feel nearly full before the meal even arrives. 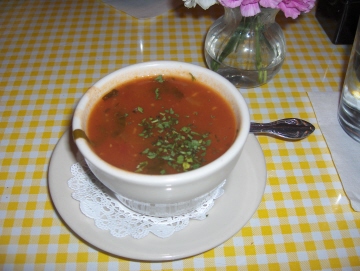 Many dinners come with a choice of soup or salad, and usually I find the soup to be a better choice. The Tomato and Basil Soup, for instance, was truly memorable for its flavor, freshness, and quality. The soups change daily and probably seasonally, but I was particularly impressed with this one. 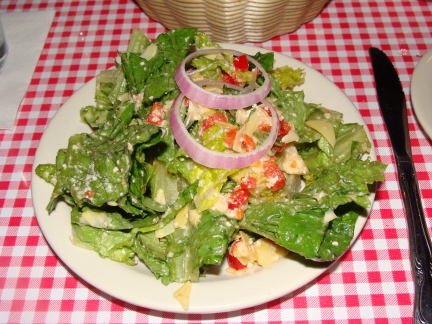 Salad is a good choice as well, and as the photo demonstrates this is much more than the typical “house salad” served at many Italian restaurants. The salad at Vito’s has greens that are actually green, and the tangy dressing is quite good (although I still prefer the dressing at Papa Dio’s). 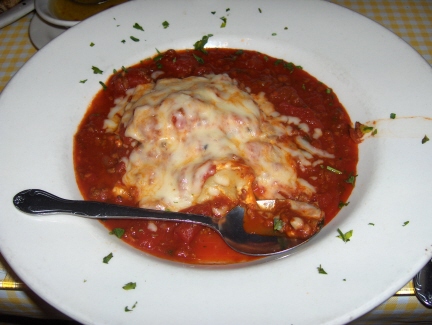 One of my favorite dishes at Vito’s has been the Lasagna, a wonderful concoction of beef and pork meatballs, pasta, cheese, and sauce that is not quite like any other lasagna dish I have tried. The meatballs are cooked into the sauce, but would be easy to remove if you are a vegetarian. To me, though, this is definitely one of the best parts of the dish. So far this is the best lasagna I have found in OKC. 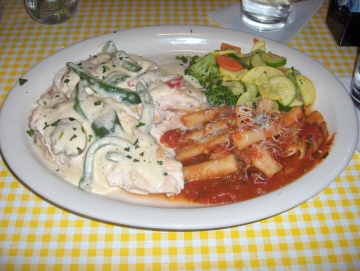 The Chicken Marsala was frankly not my favorite dish here, but it impressed me by having a better flavor than the cream sauces I have tried in many other restaurants. 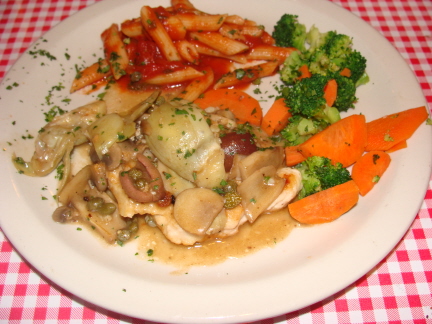 Chicken Scalloppine is a relatively recent addition to the menu, and originally only veal was served. However, the mushrooms, capers, olives, and lemon butter sauce are really too good to be kept to only one dish, and I thought the chicken version was a definite winner. This dish was a good balance of flavors, and is a good alternative to the red sauce dishes (but you don’t have to miss out on the red sauce because it is served with pasta on the side).

The Chicken Parmesan was excellent as well, with tender chicken and a light sauce. The parmesan cheese slices lightly melted on top contributed as much as anything to the excellent quality of the dish (as they do with the eggplant dish). 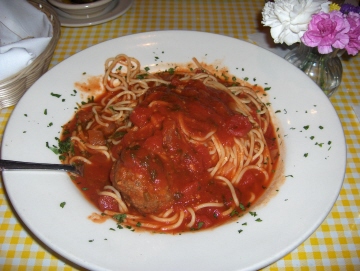 Spaghetti and Meatballs were memorable not only for the meatballs, but also for the sauce. The meat seemed to be the same as the one used in the lasagna, only formed into larger balls (two meatballs were served with the order). The sauce had thick chunks of tomatoes and vegetables that made it delicious and filling. It had a noticeable sweet flavor, but I think it is the same sauce used in all the dishes at Vito’s. It just seemed sweeter with the spaghetti due to a lack of distractions such as cheese that would offset the sauce’s flavor. A generous amount of basil was used, but this seems to be the case with all the dishes at Vito’s. I was particularly impressed with the spaghetti for being a very satisfying dish with no cheese (although the server will add parmesan cheese if desired). 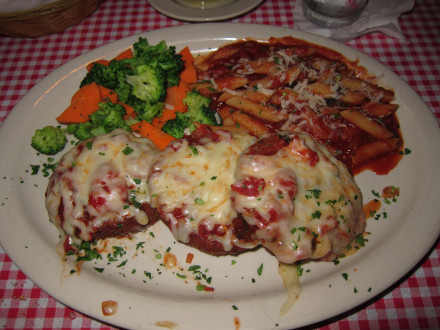 The Eggplant Parmesan is one of the best in the city, and on an earlier menu it was listed as “Vito’s specialty” (now there are three dishes listed as specialties). I think the eggplant truly qualifies as a specialty because they have everything down right, including the breading, the eggplant, and the sauce. This is one of the two or three eggplant parmesan dishes in the city that I think is definitely worth trying. Of special note is the fact that Vito’s has avoided the temptation to overcook the eggplant.

One further note is that I frequently share this dish and I feel that the quantity is more than adequate for two persons (but when sharing I order an extra soup or salad). 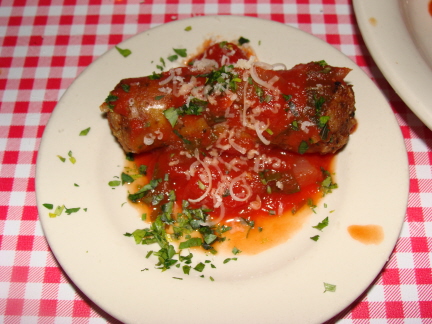 Italian Sausage is one of the items at Vito’s that is well known for being authentic and one of the best examples that can be found in Oklahoma City. Since some time passed between sampling the meatballs and the Italian sausage, I cannot say for sure which is better. It seemed, though, that both were excellent. The spices in the Italian sausage were so unique that this appears to be the reason the sausage is especially sought out. The sausage shown in the photo was a side serving, and it is available in the number of pieces desired or on a dinner. 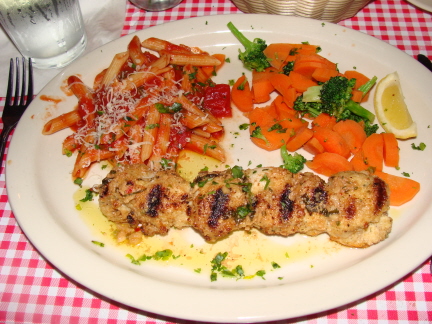 The Italian sausage is one of the several specialties Cathy brought from Kansas City, and which is popular in the restaurants there. Another is the Chicken Spedini, a breaded and highly seasoned grilled chicken dish with no tomato sauce, but which comes with a side of pasta that gives a balance of flavors. I enjoyed this dish not only because of the flavor, but also because it is not often I find something I like to order at Italian restaurants that is a departure from the normal dishes served at every restaurant. 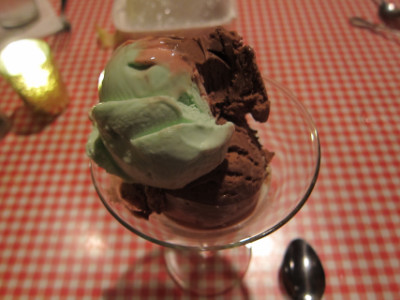 Vito’s does not have as many dessert choices as other Italian restaurants (I think it is because very few customers ever have room for dessert). One that is good, though, is the Spumoni ice cream which is much like the three-flavored Neapolitan ice cream found at ice cream shops (except that these flavors are a little different). 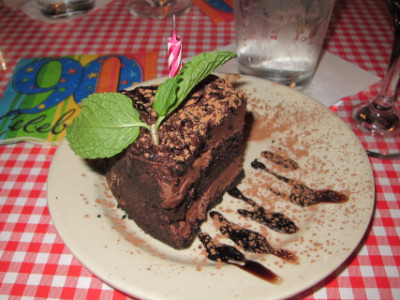 If your appetite can handle, it, though, I really recommend the Chocolate Cake which is so rich I think one piece can be shared by everyone at your table no matter how many are at the table. 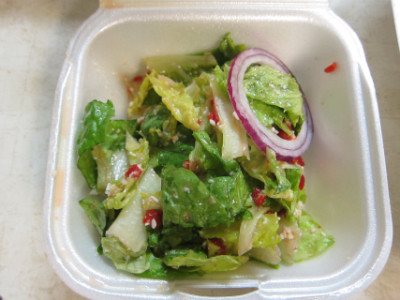 Dinners come with soup or salad, and the house salad is usually my choice. 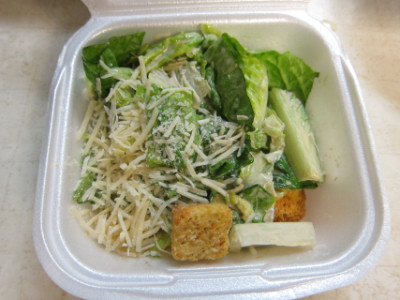 I think this is one of the best Caesar salads in town. 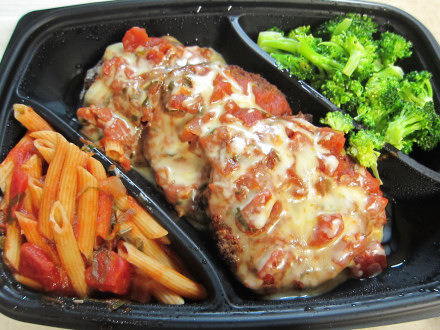 Eggplant parmesan is one of the House Specialties, and is one of my favorite dishes. 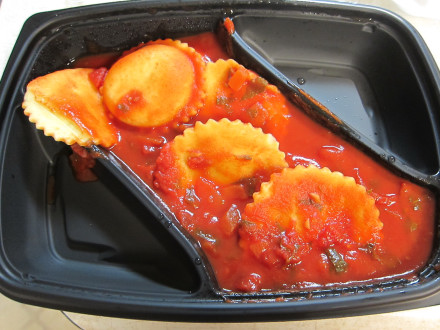 Ravioli does not have broccoli or pasta on the side, but it does come with a salad. This is a good choice for takeout because it keeps well and reheats well (in case you cannot eat all of this at one sitting as I seem to not be able to do). 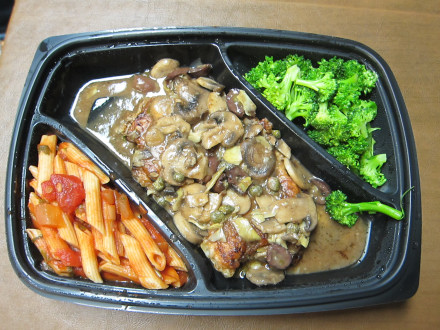 Chicken scaloppine is one of my favorite items here.

All of the items I have tried for takeout have had the same flavor and quality as in the restaurant. Cathy provides her home made bread to go with the meals (just as you get in the restaurant).

I think the ravioli is a good choice if you want to reheat the dinner and get more than one meal out of it (I did not get to try the chicken scaloppine as a leftover so I do not know how it comes out). With the eggplant parmesan the only thing that I thought suffered as a leftover was the texture of the eggplant (eggplant is not one of my favorite vegetables to begin with, but I do like the way Cathy makes it).

Closing Comments
Vito’s is a small family run operation, and it is obvious that much care is taken to assure high quality. Probably the biggest drawback is that the menu is smaller than other Italian restaurants, but there is no shortage of good choices. Some items have been added over time, and if you don’t see what you want chances are that they can still cook it for you. Pizza is really the only item I might have expected the restaurant to have that is not served.

Vito’s is a dinner-only restaurant (in 2008 it began serving lunch but this has now been discontinued). I like the limited hours, though, because this is one way they maintain the high quality (and every time I have gone I have seen Cathy there).

Wine is available from the wine list or the house wines. My information also says they have a full bar, but I am not sure about this. 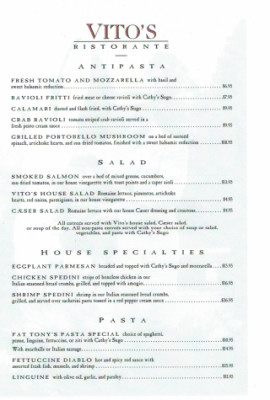 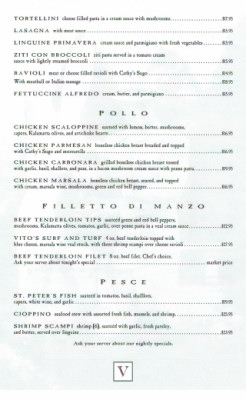