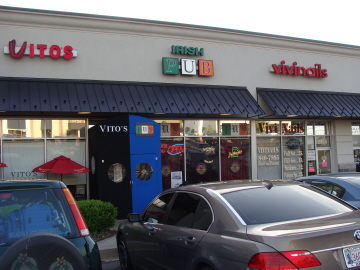 When I was visiting England it seemed that neighborhood pubs were a reliable source of good food, and although it was not fine dining it was enjoyable. For some items, such as fish and chips, I found it better to go to larger restaurants that specialized in that item. Although Sean Cummings’ Irish Restaurant and Pub would not want to be accused of committing the heresy of serving English food, the concept of Irish pubs is very similar to the English variety. At Sean Cummings’ Restaurant the atmosphere is relaxed, drinks are an integral part of the menu, and the food served is what I would call comfort food. Because of this, when I went to Sean Cummings’ Restaurant I felt right at home.

Over my lifetime it seems that American restaurants in Oklahoma City have largely disappeared. There is still an abundance of hamburgers and fried food, but it is difficult to find places that serve food that taste like home cooked meals. Although Sean Cummings’ Restaurant is European, there are enough similarities to the home cooked meals I have experienced to say that this is a good place to satisfy these cravings. Like many European style restaurants, it is not as much the exotic nature of the food that attracts me as its familiarity, and the feeling that this is the type of food that I really like. 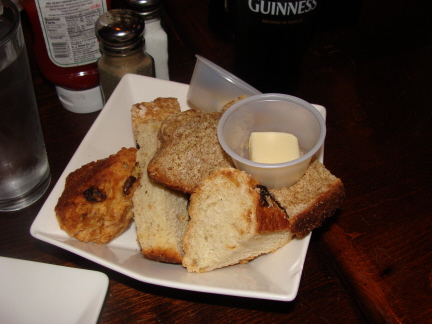 Bread served as an appetizer

Meals start out with a serving of bread. At the old restaurant I was not overly impressed with the bread, but now I find it to be one of the highlights of the meal. In fact, this bread is so good that I use any portion that manages to remain uneaten as a supplement to my breakfasts. 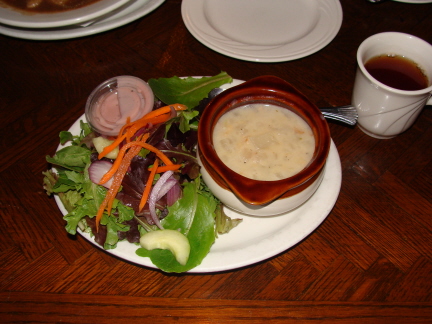 A soup and salad plate are also available, such as the one pictured. I do not know the full list of soups offered, but the emphasis is on traditional varieties that taste home made. The Clam Chowder was very good, and Sean Cummings’ Restaurant is one of the few sources of it in Oklahoma City (and as at Sean’s former restaurant Boca Boca, seafood items are some the best that can be ordered here). 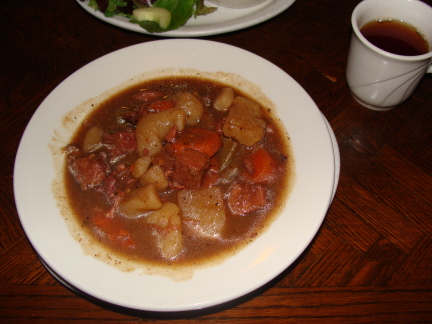 My initial visit to Sean Cummings’ Restaurant was at the original location in The Village after Boca Boca had been turned into the Pub. Now after two location changes and a time when the Irish Pub was not open at all, the Irish Stew I tried at the first location is still my favorite item at the restaurant. This is a classic stew with meat, potatoes, and vegetables thrown in, but I have had very few stews that taste as good as this one. Stew is a dish that I commonly associate with American restaurants, but it is one of the reasons I have found most American restaurants in the city to be so disappointing (and Sean Cummings’ Restaurant, by contrast, to be so good). This dish is not a traditional American dish, but I think it is something that helped inspire American cooking when much of it was better than it is now. 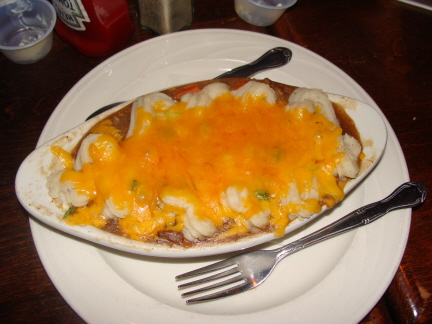 Shepard’s Pie is another traditional comfort food, made with ground beef, carrots, green beans, cheddar cheese, and a liberal amount of mashed potatoes. I thought it had a flavorful sauce, and was another good dish. It may also be the most filling dish that the restaurant serves. 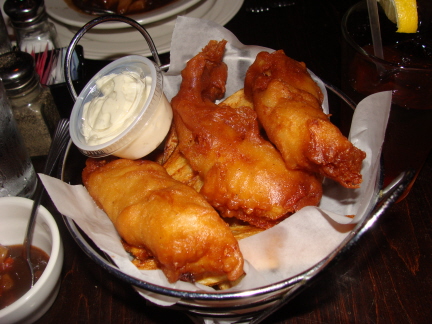 To judge Fish and Chips my standards are primarily the ones I ate in London and secondarily the ones on the Oregon and California coast. I know Oklahoma City should not and probably cannot be held to the same standards, but the ones at Sean Cummings’ Restaurant were quite good nevertheless. They were good fish with a good batter, and this is about all that is involved in the fish. The chips (french fries) were about the same quality, but this is the area where I felt the ones in London were noticeably better. The dish was missing cole slaw or something to accompany it to balance the flavors and to offset eating so much fried food, but this can be ordered as a side dish. 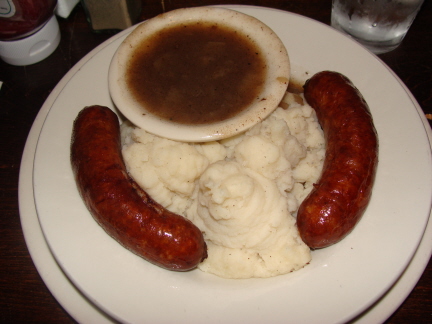 The Bangers and Mash (Irish sausage links) dispel the idea that Irish food might be bland, with a very spicy sausage and peppery gravy for the mashed potatoes. The sausage tasted a little like bratwurst and the gravy was very much like I would expect brown gravy to be, except that it had quite a lot of pepper. The mashed potatoes were a little disappointing in taste, but at least the texture was good and I did not believe them to be instant.

I am used to spicy Asian food, but I am not used to the kind of spiciness found in the bangers, so they were not quite as enjoyable as German bratwurst or other sausages would have been that do not have as much kick to them (I also do not care for the hot links served at barbecue restaurants). This is just my personal preference.

Other Items
This section is for items I did not order but for which I have had reports that they are very good: 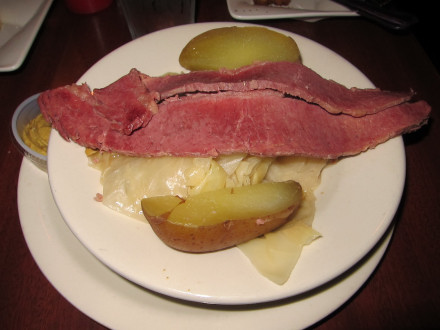 The corned beef looks appetizing, but I have not had a chance to try it. 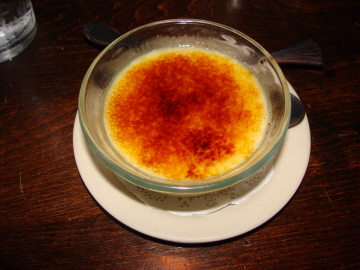 Several desserts were offered, and the Creme Brulee I tried was good but I thought was overpriced, and better ones are served at other restaurants. 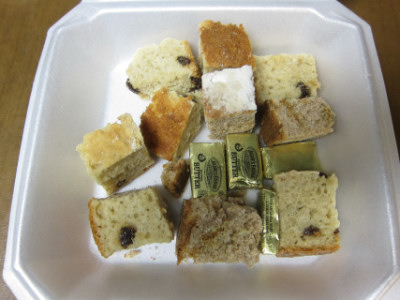 Bread is not only excellent with the meal, but is great with breakfasts at home. The bread was freshly baked, but was still good for three or four days after I had it at home (although it was a struggle to keep it around this long without eating it). 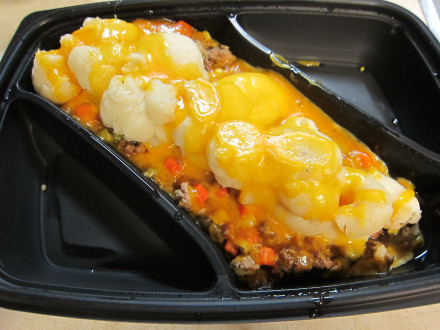 I enjoyed the takeout version of Shepard’s Pie with no noticeable diminishing of quality from the dine-in version.

The Pub has been known for its live music and relaxing environment, but at times when you cannot dine in, at least the food seems to be just as good as it is when you eat in the restaurant.

Closing Comments
Sean Cummings’ Restaurant offers a good choice of items, but my favorites are the ones I consider to be the more healthy options such as the Irish stew. Other dishes are available that I have not yet been able to try, and they all look interesting. Based on my experience here and at Boca Boca (Sean’s previous restaurant), I would not be hesitant to try anything on the menu. There is an overall freshness and good quality to everything served that I think makes this an excellent restaurant.