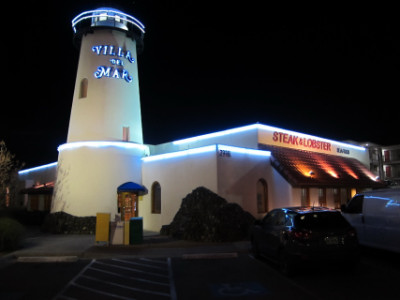 For years Villa del Mar has been a popular destination in Ciudad Juárez, Mexico for locals and people crossing the border from El Paso. Known for its “Boquilla bass” (fresh water bass caught from the Boquilla Lake in Mexico) and other seafood items such as shrimp and oysters, it has always been fresher and better prepared than just about any seafood place in the borderland.

Villa del Mar is actually one of my long time favorite restaurants, even though I only ate at the El Paso location for the first time in 2005 (it is located on the frontage road to I-10–take the Yarbrough exit on the east side of town). The original Boquilla bass is long gone, I think both in El Paso and in Juárez. I have heard that the lake is now contaminated, but I don’t know the full story. 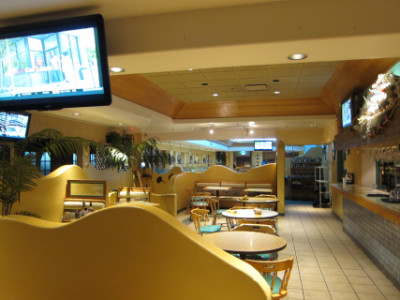 The large dining room with TV screens and a bar area

I am impressed, though, that Villa del Mar continues to look for sources of fresh tasting fish, and there are not only more choices available now, but they seem to be better. Just as in the early days when Villa del Mar found good sources of fish that most other restaurants did not serve, I also think the same is true today.

Villa del Mar used to serve whole fish using both bass (that I think was farm raised) and snapper. They now use tilapia from China for the fillets, but I am not sure if this includes the several styles of whole mojarra fish on the menu (Wikipedia explains mojarra as several types of shallow water fish including tilapia).

I don’t know… after a meal I had in Matamoros, Mexico on the Gulf coast I don’t think anything in the desert could ever come close to that experience. However, I do enjoy the fillets at Villa del Mar. The concept of the food here seems to be that they will use whatever is the freshest.

One waiter indicated to me that the fillet is now their highest quality fish rather than the whole fish, but I am sure it is best to ask any time you go. I know I certainly have had good results ordering the fillet. 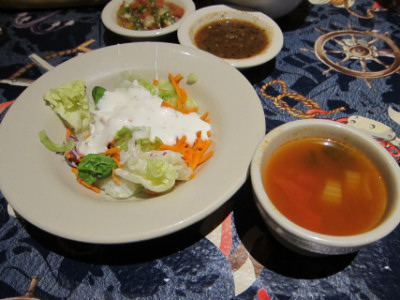 A salad comes with dinners, and it is hard to complain about anything that is free. I did enjoy it, though, especially because of the dressing.

The Fish Soup was outstanding, though, and was also free with the dinner. 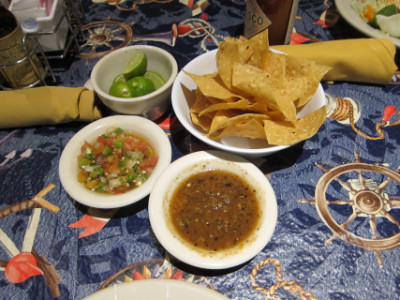 Chips and salsa are excellent

The Chips and Salsa are excellent (but I like the regular salsa better than the pico de gallo style). 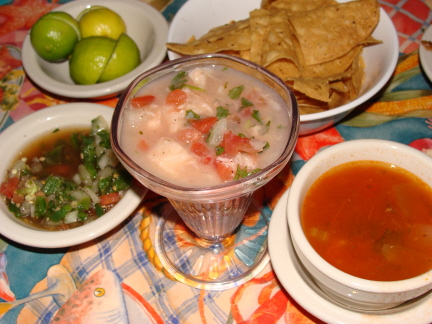 The Fish Ceviche is one of several choices from the appetizer menu. This had good fish, but I did not think the ceviche came off quite as well as others I have tried. I recommend the half order as an appetizer, but for a meal I would go with the fish or shrimp dinners rather than a full order of ceviche. 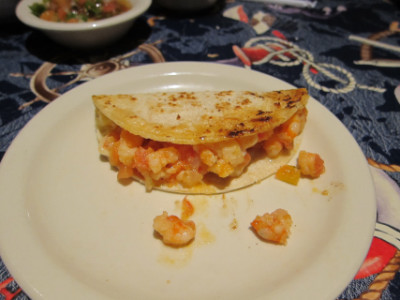 The Shrimp Quesadilla makes a flavorful appetizer, although appetizers are usually the idea of my dining companions because I get quite full from the meal itself. 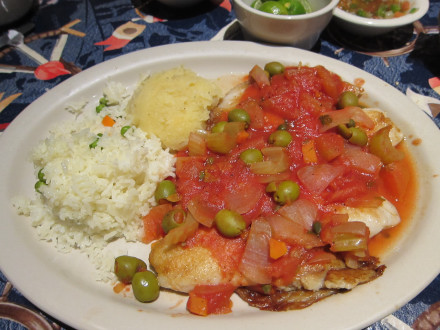 The Filete Veracruzano has traditionally been one of my favorites that I order at different restaurants. Many times the topping covers up the taste of a less than premium fish. Here, though, the fish not only tasted fresh, but the tomato, celery, and olive topping was one of the best, if not the best, I have had in El Paso. Although this is not a spicy dish, the olives, tomatoes and other ingredients make it interesting. 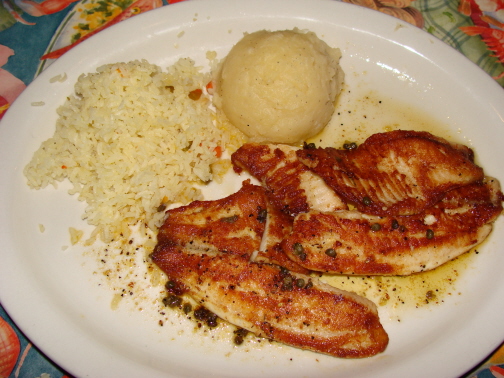 The Lemon Pepper Fillet had a great breading that brought out the flavor of the fish, and was very well prepared. It came in a large serving that was very satisfying, but not expensive compared to other restaurants. 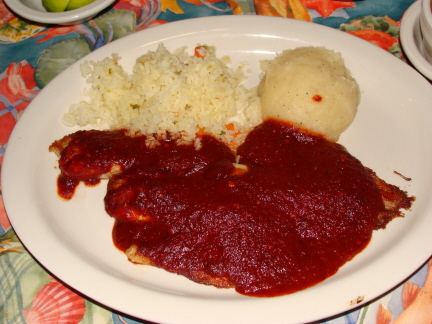 At other restaurants I have enjoyed the Filete Diabla with a spicy chipotle sauce, but I found the one here to be a bit overwhelming in the spiciness. It was also a bit surprising considering that the other fillets I have tried have been markedly on the mild side.

Side Dishes
The mashed potatoes that come with the fillet are excellent, and the rice is just there (nothing special). This is apparently the traditional way to serve Mexican style fish.

Additional Comments
It should be obvious that the fish here is not like it is in Baja California or the Gulf Coast, but they do a pretty good job for an inland seafood restaurant. The fish has a good flavor, but mostly what I like are the toppings and side dishes that come with it.

I particularly like the veracruzano style fish here because it seems to be very traditional and in my mind sets the standard for the way it should be done.

This restaurant is actually Villa del Mar #2–the original is in Ciudad Juárez, and a third is now open on Mesa Street in west El Paso.