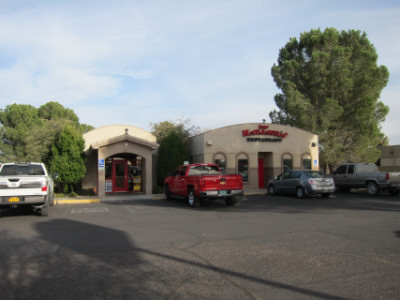 Los Mariachis in Las Cruces could also be called the Roving Mariachis, having moved from its original location in Mesilla to the west side of Las Cruces.  The distance moved was only two or three miles, but after eating at the new restaurant I suspected some other changes had occurred, such as changes to the menu. I decided it would be best to start over with a new review and appraisal of the food, although what I tried was influenced by what I liked best at the old restaurant. 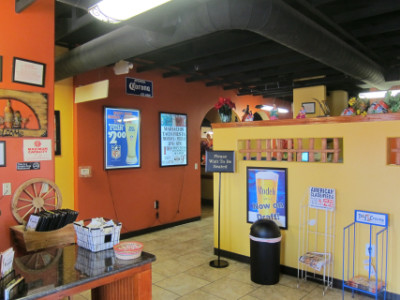 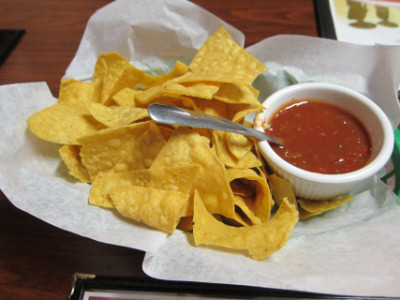 The excellent chips and salsa are one feature that has been carried over from the old restaurant. I rate the Salsa as among the best in Las Cruces, and the Chips equally (although this is not as important as the salsa being good). The salsa had a good flavor and a good spice (“good” being defined as definitely there but not so overwhelming that it numbed my tongue so that I could not taste the flavors). 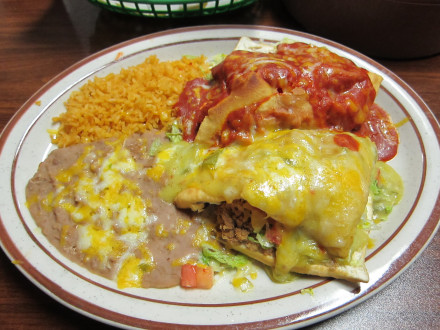 Stuffed Sopapillas are an item I frequently order in New Mexico because of the fact that it is almost non-existent in El Paso. Previously I had thought the ones here were some of the best in Las Cruces. After some additional experimentation I still feel this way, but with some qualifications.

The stuffed sopapillas shown in the above photo not only had different toppings but also different fillings (on the Stuffed Sopapillas plate you have several choices, and the two on the plate can be different as mine were).

The one in front had shredded beef with green chile on top. I ordered this because it was the waiter’s recommendation, and it turned out to be my favorite of the two. The most surprising thing about it was that the green chile replaced the red I had at the old restaurant as my favorite. In fact, this was easily one of the top green chiles I have had in New Mexico. The shredded beef was also excellent. The menu gives a choice of shreded beef, chicken, or ground beef, but they also allow you to make other choices (such as the beans I really liked in the stuffed sopapillas at the Mesilla restaurant).

The other sopapilla was topped with red chile with chile con carne inside (one of several choices suggested by the waiter although it is not listed on the menu). The chile con carne was spicy, though, and I really do not recommend getting something spicy inside when the chile on top is quite spicy in itself. It tasted good, but I cannot say I enjoyed it as much as the spicy green chile contrasted with the non-spicy shredded beef.

Another difference I noted, though, was in the chiles. Both were spicy, but the green chile had a fresh and crisp flavor while the red sauce seemed filled with too many other ingredients that did not make it taste like the red chile I have enjoyed over the years (or like the one I had at the Mesilla restaurant). In short, the red chile was not as good as before, while the green one was better. The sopapilla itself had the same excellent flavor as before, and I was completely satisfied with the green one (although the red was also pretty good).

Red Enchiladas
I reported on my previous review that I also really liked the red enchiladas, but now I would recommend the green.

Rice and Beans
The beans and rice were very good, very much like the ones in other restaurants. The important thing is that the beans are suitable to put inside the stuffed sopapilla if you want a vegetarian version. 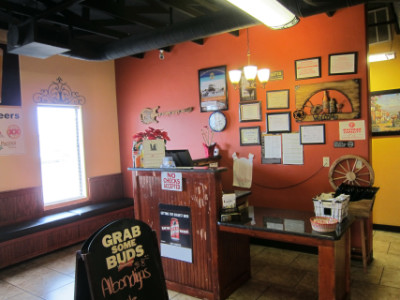 Specials are posted as you enter

They sometimes have specials, such as the albondigas posted on the board the day I went.

One of the keys of this restaurant is that they make substitutions to give you the food you want, and the waiter did a very good job of working with me to offer some good choices on the stuffed sopapillas. Whatever menu changes they have made are not terribly important because they will make your food the way you want whether it is on the menu or not.

I am not sure whether the red and green chiles have actually changed from their Mesilla location or whether my tastes have changed, but based on experiences at other restaurants I tend to think the former (the chiles at other restaurants still taste the same to me as before). I still like Los Marichias as much as before, but I have switched from being a red person to a green one (at least based on this one experience I have had).

I changed the chile index from “5 chiles” at the old restaurant to 4 here, and I think this is actually a good thing (there is still enough spice to really enjoy it). My stuffed sopapilla with chile con carne inside, though, was still at the 5 spice level.