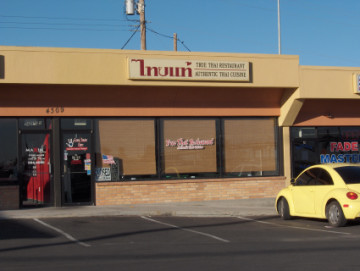 History:  For the several years True Thai existed it had several cooks, changes in staff, and changes in some of the food served.  I said in the review that the overall rating of the restaurant did not change over time, but the list of “best dishes” was different with each cook.

The original True Thai was my favorite, though, because of the special dishes they could make.  One of these, the Isan style phad thai, is really the reason I want to include this review on my blog.  Unfortunately I never got a photo of this dish, but it is something I will seek out whenever I am able to visit an Isan style Thai restaurant in the future.

The rating of this restaurant did not reflect the “special food” I was able to get (which included the Isan style phad thai).  In subsequent years I have had many experiences of being able to get specially prepared items at various restaurants, so this makes good for good discussions on blogs but does not normally cause me to raise the ratings of these restaurants (unless other customers can also order this food and be able to get it on demand).

One note about True Thai is that I was always intrigued by the sign (which was written in Thai).  I have since learned that it says Thai Teh (real or genuine Thai), which I know was the case at least to a certain extent.

This seems to be the most authentic Thai restaurant in El Paso (thus the name “True Thai,” I suppose). True Thai is small and sometimes requires a wait to get a table, but it is always friendly and courteous.

It has taken some experimentation to find some of the more interesting plates. This has been made more complicated by the fact that there used to be a different cook, and now it seems I have to try everything over again. I do not think the restaurant is any better or worse than it used to be, but I have definitely developed a different list of “favorites.” 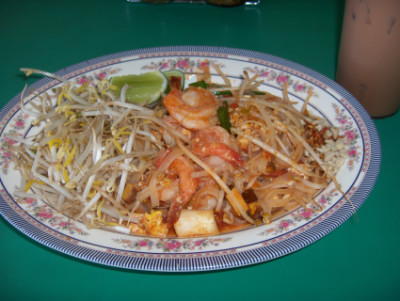 Phad thai (from the regular menu)

At first my favorite was the Phad Thai, something I think the restaurant was encouraging novices in Thai food to order (as I was when I first starting going to True Thai). Although the lime, sugar, peanuts, and Thai chiles served as a condiment on the table made it enjoyable, I found the noodles to be rather sticky and gooey (how do you like my technical descriptions of Thai food?). I think this is the tamarind version of phad thai that can be contrasted to the one at Singapore Cafe that has a more brown or white color and is made without tamarind sauce. Both seem to follow authentic Thai recipes, and it is probably a matter of taste as to which one is better. When Becky at Singapore Cafe does the phad thai just right I think her version is much better. I have never found the one at True Thai to be bad, though.

I say the phad thai used to be my favorite dish because I was spoiled when the former chef made a northern Thailand style Isan Phad Thai upon special request. I was talking to her one day asking if she could make anything that was not on the menu, and this was her suggestion. Northern style phad thai is made with a tomato sauce (I assume instead of the tamarind) and is more spicy than the southern style dish. This became my regular request at the restaurant, but I had to go at a time when the restaurant was not very busy and the ingredients for the dish were available (which I could never predict). This was one of the best Thai dishes I have tried, but it never caught on so that it would be added to the menu. The current chef either cannot or does not wish to prepare northern Thailand dishes, so I have not had the Isan phad thai in quite a while.

The main lesson I have found from going to a number of Thai restaurants is that almost all Thai food is good, but only a few restaurants bring it to the level of greatness that I think represents Thailand’s best food. The northern style phad thai I used to get at True Thai was one of those dishes I thought rose to the level of greatness. Most of the things on True Thai’s menu are not what I would consider special when compared to some of the best Thai restaurants in other cities. Still, there are quite a few things I enjoy and can recommend.

The curry dishes have consistently been the best in El Paso. They started out being thin and runny, being just slightly better than at the other restaurants. I have been pretty impressed, though, by the way the current chef has made the curry thicker with a more vibrant flavor. It is now coming close to some of the better curries I have ever had. 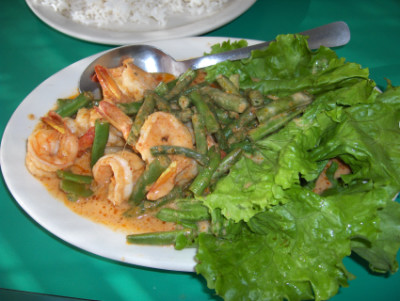 Phad Prik King is one of the better curry dishes, consisting of a red curry served with green beans. I have tried several meats with it, with shrimp being the best. The chicken did not have a flavor that was quite as enticing as it should be. Probably the versions I like best are with vegetables or tofu. Until 2007 the phad prik king has always been like I have found it in other restaurants–red curry made without coconut milk. For some reason the chef has now begun using red curry with coconut milk, which I do not believe is the traditional way this dish is made. However, I do not know whether to complain that the curry is non-traditional or be glad because it is so good. I have certainly not exhausted all the Asian restaurants in Texas, but the only ones I have experienced that have better curry (with the coconut milk) are the Lao restaurants in Amarillo. I suspect, though, that if the chef would make it without coconut milk, as it was before, it would be just as good if not better. 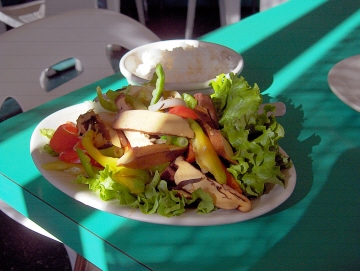 The Phad King (ginger) has a delicious sauce, but the vegetables have been disappointing. The vegetables usually consist of a lot of bell peppers and other crunchy things that I do not like as much as the more traditional green vegetables. More than anything, I just have not found the dish to be filling enough when I order the vegetable version. 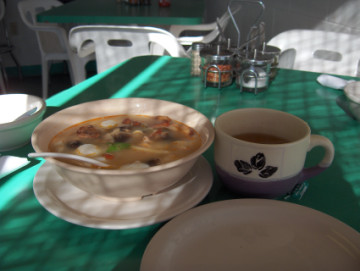 One of the best items has been Tom Yum. It consisted of a good amount of vegetables in a soup broth with curry paste and a generous amount of lime (a choice of meat was also available). The lemongrass and galanga provide just about everything that makes this dish good (there is even a jar of Thai peppers and fish sauce on the table that can be added).

Other types of soup with seafood have been very good, but I do not remember what they were called on the menu.

So far I have found that just about everything except the phad thai is better with a side order of rice. It costs extra, though.

The Thai Tea is one of the best I have found at any Thai restaurant, and has never been disappointing on the numerous times I have ordered it.

One problem I have found at True Thai has been the lack of variety on the menu and the fact that they do not serve a lot of items I find at just about every other Thai restaurant I have visited. Some of the items that are served occasionally lack some of the ingredients that are normally included in the dish. (I think both of these shortcomings are symptoms of El Paso’s isolation from a large Asian population and a lack of Asian super markets). I believe the restaurant is doing the best it can, and at least is delivering more authentic Thai food than can be found in other establishments around the borderland.

Probably my biggest gripe with True Thai is that I do not think either the chicken or tofu are as good as they should be. I have tried some beef dishes that were not very exciting. Probably the only items I would recommend here are ones made with seafood or vegetables, and even the vegetables have left me disappointed on occasion. The curries and sauces here are pretty good–it is just the items that go with the sauces that are disappointing.

The restaurant is small with about eight tables, and I don’t care much for the plastic patio chairs that are used. While the food is not expensive, an order of spring rolls or soup will push the price up so that it becomes one of the higher priced Asian restaurants in the city. Rice is extra and Thai tea is more expensive than the regular tea.

There are several other dishes I have tried and found mediocre (three stars). There are many more that I have not tried, and may be quite good. I do know that the curry dishes are pretty good and seem to have improved from when the restaurant first opened. It is well worthwhile giving True Thai a try.