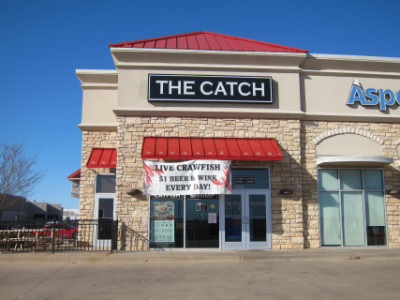 The Catch on Memorial Rd.

There is a prominent local radio talk show host who I find interesting not only for his political views and knowledge of current events, but who also frequently shares personal stories which can be good sources of information as well. On a recent program he mentioned that he had tried a newly opened Cajun restaurant called The Catch, and how it serves “real” Cajun food as opposed to some others which may taste good but are not authentic Cajun. He knows because he moved to Oklahoma City from Lafayette, Louisiana. My own visits to Louisiana have confirmed to me that not all restaurants around the country that are trying to capitalize on the Cajun food popularity really live up to what they advertise themselves to be.

The Catch is a chain out of Texas, a state which itself has a pretty substantial Cajun population. The Catch’s first venture outside of Texas has been in Oklahoma City, where they recently opened three restaurants (The Catch’s web site only lists the location on Memorial Road but Yelp indicates that there are two others).

The menu at The Catch is not very extensive but it certainly fit my experience of how Cajun food should taste. I know that many people are seeking good taste rather than authenticity, but with this type of food I think preparing it the right way (as the radio talk show host said) is the key to it being good. In any case, this particular restaurant is what I would describe as good.

The price was a little high, but I splurged a little bit (readers can refer to the menu below and determine whether it is within their price range).

I got an order to go, but it looked as if the take-out containers were served to everyone whether they ate in or out. The major difference was that if you ate on the premises you could get refills on the drinks. They also had a condiment bar in case you wanted to add some flavor to the food. One of the employees advised me that he liked the food as it was served and did not make use of the additives they provided, and I agreed with him after trying the food. I should point out that in Louisiana the custom seemed to be to eat the food as it was served and to not add anything to it. 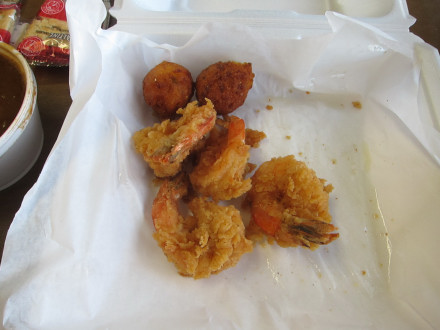 The main dishes at The Catch include fried shrimp, catfish, oysters, crawfish, and chicken. There is also boiled shrimp, Po Boys, tacos, and some blackened dishes. I went with the Fried Shrimp, and got the smallest order they had (which was just about the right size for lunch). I was pretty impressed with the shrimp, and I found that the batter was lighter and much more flavorful than most that I have tried (it would probably be in the mid range for those in Louisiana and very high on the scale anywhere away from the coast). Their largest order is called the “Jumbo,” not to be confused with the fact that all orders have what I would consider to be jumbo shrimp in terms of size.

The Hush Puppies were the least impressive part of the meal I had, but I still enjoyed them (they were just a little more mushy than most). 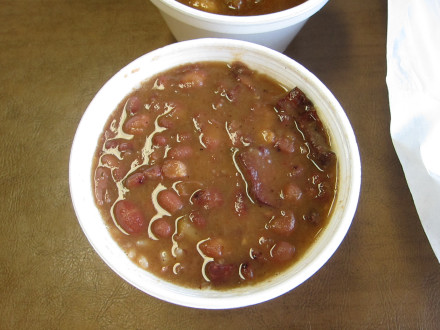 The shrimp baskets come with fries, but they offered to substitute Red Beans and Rice for them at no extra cost. For me this was a real treat and a real bargain. The order of red beans was quite large and had an exceptional smoky flavor with a large amount of sausage thrown in. They were spicy to a good and appropriate level, and I certainly think this restaurant knows what they are doing on this dish. 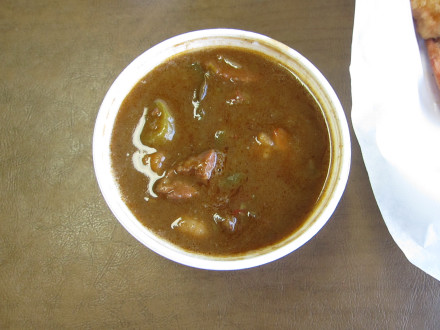 I wanted to try the Gumbo, which was the main thing that ran up the price for me. It turned out to have very much the same kind of smoky flavor that was in the red beans and rice, but the gumbo had different ingredients including some shrimp and what seemed to be a larger amount of sausage than was in the red beans and rice. In fact, I thought at first that they had mistakenly given me two orders of the same thing until I dug in and found that the ingredients were different (the sauce seemed to be exactly as the one in the red beans & rice).

Other Comments
Some of the highlights of The Catch included the freshness of the shrimp and the flavor of the gumbo and red beans & rice (I think they had the same sauce). I also have to say that they know what they are doing with the sausage (there was a generous amount in the red beans & rice and even more in the gumbo).

I did notice a “fried food” aftertaste from the shrimp, though. This is understandable because obviously the shrimp was fried, but I think there are some kinds of oil that I like better than others and one was not my favorite (the flavor was good but it was just the aftertaste that did not come off so well).

Both the gumbo and red beans & rice were so impressive that I really think I need to go back and try some other items. 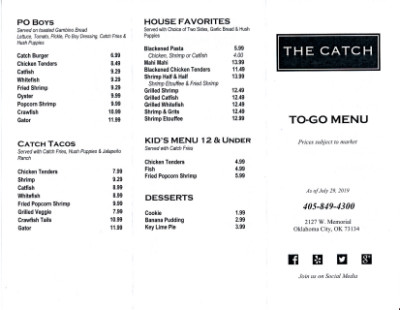 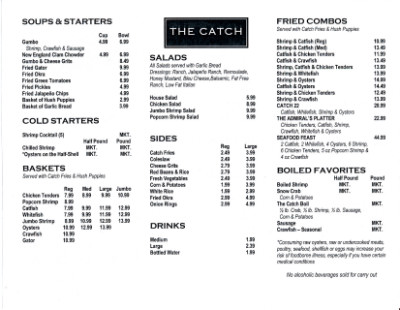