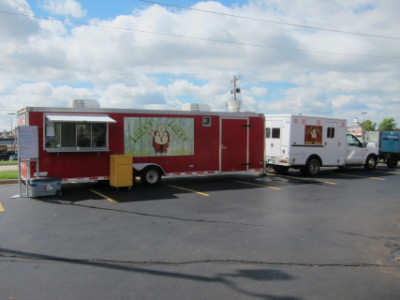 Lucky Lucky is one of several food trucks that has had a regular rotation to N.W. 122nd St. and Rockwell, and once I learned their schedule I became a regular customer. They have a Facebook page that announces their current location, but for people like me who are not as high tech there is really nothing better than establishing a regular schedule as Lucky Lucky did.

Lucky Lucky used to show up at this location every other Sunday (I think the weather occasionally made them skip a time when they normally would have come). The pandemic, though, is what brought the visits to an end. The last time I saw them was March 1, 2020. Sometime after the quarantine they began operating again, but not at the Rockwell and N.W. 122nd location. I have seen Facebook posts indicating they have visited cities such as Shawnee and Ada, but they mostly stay in Oklahoma City.

I began trying items at random, but I found it better to tell the owner what kind of food I wanted and let him make suggestions. My regular order ended up being the beef noodle bowl with seaweed, although everything I tried was a taste treat. He suggested, though, that the noodle bowl was good for the purpose I wanted it–something that most of the time would be reheated so that I would have another meal to enjoy later. I mostly saw the food truck out of the window while eating at Fortune Chinese Restaurant, so I was not ready for a second meal right then.

Lucky Lucky was also my favorite out of the various food trucks that I had seen at this location. It was not that the food necessarily tasted better than on the other trucks, but what I got there kept well and gave me another meal I could eat later. 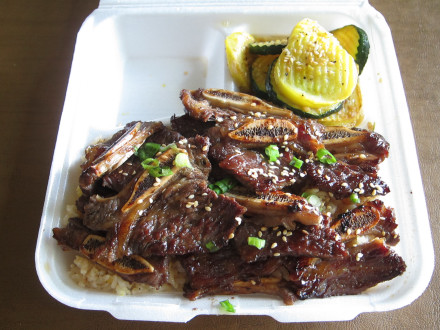 My first experience here was with the Korean Short Ribs. These had a good flavor but the meat was somewhat tough, and I did not think they were at quite the level of ribs I had tried before at various Korean restaurants. 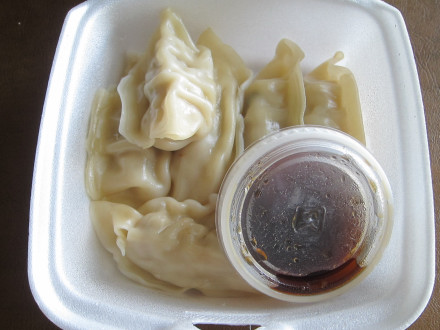 The Pork Dumplings had a better flavor but were something I enjoyed most eating on the spot rather than saving them to eat later. I thought the sauce was too sweet, and seemed to be Americanized rather than being a traditional Korean style. Still, though, the dumplings were very good.

I also tried the Fried Rice but I did not write any details about it in my notes and the only information I have is that I liked it less than the other dishes. 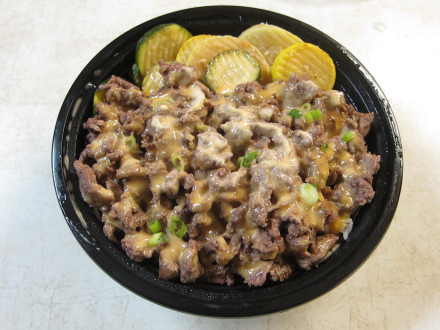 My favorite item ended up being the Korean Beef Bowl with Spicy Mayo. It can be ordered without the mayo but I did not try it this way. Even so, there are still some other choices to be made. It comes with either squash or seaweed on the side, and the owner first suggested the squash because this was the most popular with customers. I tried it this way but it did not seem to have much Asian flavor. The meat was good, though, and tasted almost like a steak even though it was ground beef. 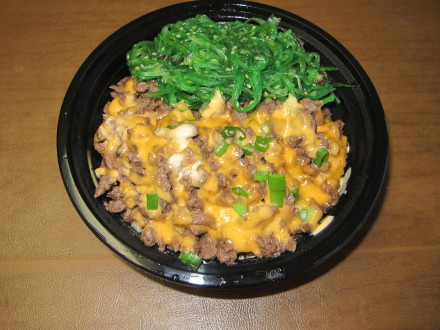 The seaweed option did not look very appetizing, but when I found out it is the way the owner prefers it, I gave it a try. This turned out to be the best dish I tried at Lucky Lucky, and I really enjoyed its “Asian flavor.” This was not the same kind of seaweed I have seen in miso and other Asian dishes, but I think the main difference was the texture and the way it was prepared. I did have to pull out some pieces that got stuck between my teeth, but otherwise this was quite an enjoyable dish.

Additional Comments
Lucky Lucky’s Facebook page had a menu posted from June 2021 that I consulted when writing this article. Some items have been added, and the beef bowl increased to $14 (it was $10 when I ordered it). This might affect the frequency that I would order it if I were in proximity to where the truck was regularly located. It would not affect the fact, though, that I would order it. Moreover there are now some additional items that look quite interesting. One thing about the beef bowl, though, was that when I took it home to eat later it was usually good for two of my normal sized meals; thus I would not complain even if the price is now higher.

The flavor factor here is quite good, particularly for food trucks. The new items they have added make it look even more interesting. I do not know what drinks they have but in any case this would be an extra cost. I still generally prefer restaurants where everything you need in a meal is provided, but for food trucks this is really one of the best ones I have found.

I do not have any notes about MSG so I am assuming they do not use it or else it is in minute quantities.