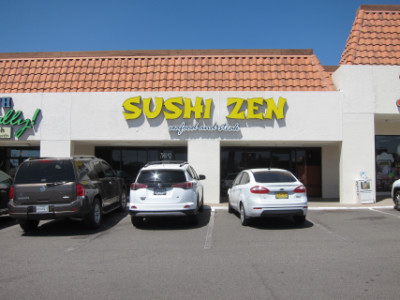 El Paso is actually replete with sushi restaurants, and I think the only parts of town where they are not in abundance are the lower income areas near the International border where it is also hard to find such amenities as grocery stores (other than neighborhood convenience stores). I am not one to start a crusade saying that the people there should demand that something be done about the situation, because it is a matter of economics whether anyone has what could be considered a necessity such as a grocery store or a luxury such as a sushi restaurant. Although both of these are unequally distributed throughout the city’s neighborhoods, market demand dictates that both are in abundance in the area. I think that many people who have the money to go out to eat have sushi high on their priority list, judging by the number of restaurants that have opened.

In El Paso the sushi restaurants are not only all over the map geographically, but this also applies to the quality of the food. Many are not even owned by Japanese people (I would say this is true in the majority of cases). Sushi in El Paso usually refers to the California roll branch of this cuisine rather than trying to import fish that is fresh enough to make a decent nigiri or sashimi. I do not want to get into the argument right now about whether California rolls and other rolls are actual sushi, although the same argument is even made for sashimi.

From reading other web sites I understand that Sushi Zen is owned by Japanese people and that it has some of the best sushi in town, if not the best. I did not try anything from the sushi menu, so I will not attempt to give a rating to a place for which I am unable to evaluate their most popular and best rated dishes. Even though the sushi here is supposed to be the best in town, I will say that I would not expect it to be like places on the west coast, Florida, etc. Still, though, I only want to report on the food I have tried. 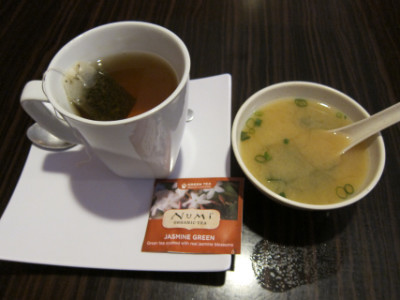 What I did find out about Sushi Zen is that they give customers a quality product for their money. A la carte items are fairly inexpensive, and you can arguably get an even better deal with a lunch combination plate consisting of three items for $10.95 (this was the price when I ordered it). Of course I also felt that it was my duty to readers to be able to report on as many items from the menu as possible, and I found the lunch combination plate a good way to do this.

Lunch Special
The A La Carte menu is effective for both lunch and dinner, and is divided into Appetizers (about $3 to $5), Kitchen ($5 to $6), and Sushi ($4 to $8). These prices are for 2018 when I visited. For the lunch special ($10.95) you can pick any three items from any of these categories. I picked two from “Kitchen” (Salmon and Tofu Veggie Plate), and one of the appetizers (Shrimp Tempura). 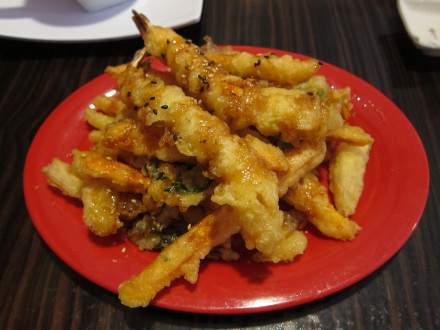 Shrimp tempura from the “Appetizer” menu

My favorite was probably the Shrimp Tempura, although all three had elements of them that I liked better than others. For instance, I liked the shrimp tempura very much, but I thought the eel sauce that came with it was very thick, very sweet, and not very flavorful. 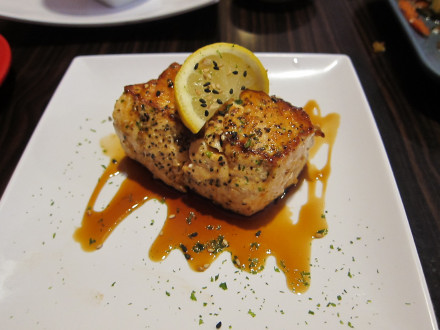 Salmon is one of the “Kitchen” items

The Salmon was very fresh (it did not have a “fishy” taste) and it had a good flavor, but the color was not anywhere close to the red that I associate with high quality salmon. The sauce was also somewhat lacking in flavor. For El Paso this was very good salmon and I would order it again, especially compared to what I find in other restaurants. 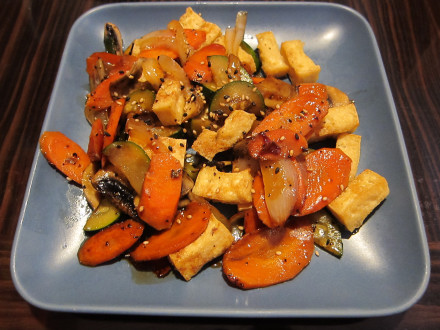 Tofu vegetable plate from the “Kitchen” section of the menu

The Tofu Vegetable Plate was certainly good quality, but just lacked flavor. I would rather it be this way than the other way around, and like the other two dishes I would order this again. It is a good value for the money, especially if you get it on the lunch combination as I did.

In short, except for the lunch combination special they serve the same items at lunch and dinner, and they are at the same prices.

Other Observations
The restaurant was quite busy when I went, and I think if there is anything El Pasoans know it is a good bargain. I believe Sushi Zen certainly gives people their money’s worth on the lunch special, and individual items are not expensive compared to other restaurants.

I have not tried the sushi, but I hear that it is good. The menu lists only rolls, though, and there is no traditional nigiri listed. I do not know if any of the rolls contain traditional sushi fish, and if this is true I would question the restaurant’s use of the name “Sushi” although that does not diminish the quality of the food they do serve.

I complained about the flavors of some of the dishes, but the restaurant does not have a sweet Americanized flavor–I think it is real Japanese but perhaps modified because of the ingredients available in the Southwestern desert and also the tastes of the people in the region (which would make it “Americanized,” if true, but I just do not believe the food here is what I would normally classify as being Americanized).

There is another Sushi Zen at 2400 N. Mesa Street (I believe this is the original restaurant). I think that both of them have the same food, and the one at 7040 N. Mesa would certainly be easier in terms of finding a parking spot.