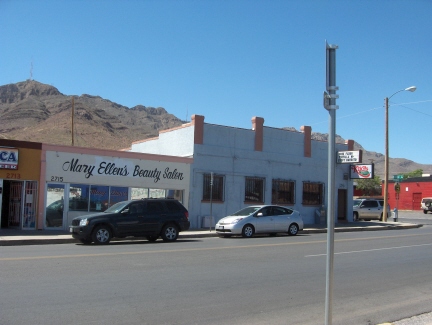 Kiki’s has been around so long it is an El Paso tradition, yet even though the items served are similar to the ones found at just about every other restaurant in the city, they are done with a unique twist. Kiki’s has solid Mexican food, and I especially like the fact that everything is cooked in vegetable oil (it was one of the first Mexican restaurants in El Paso to cater to El Paso’s small vegetarian community). For years it was also home to live blues music on Sunday nights, but I have not heard about this being the case recently.

The building shows obvious signs of age, and although the restaurant is not quite at the stage that it would be considered as a historic landmark, that honor might be bestowed upon the large bar if such a designation existed. A history I read about Kiki’s said that the building has been in continual use since 1928, and was home to several businesses until it became the Manhattan Beer Depot and Bar in 1937. The bar had two more names before the Keg and Fork opened in 1974 (which seems to be the first time it could be considered a real restaurant). In 1976 it became Kiki’s (named after the owner’s two year old daughter), and in 2012 the restaurant’s long time manager bought it. Thus it is clear that the attraction here was the bar before the food attained equal popularity.

When the city’s first anti-smoking ordinance was passed the non-smokers were afforded a small dining room with about eight tables, while the large dining room and bar area remained smoke friendly. With all restaurants being forced to be smoke free under the current ordinance, I think the atmosphere has changed somewhat and I would say has become more family friendly than previously when it mainly had a bar atmosphere. If anything, though, Kiki’s seems to be more popular than ever leading to even worse wait times for a table and having to park even farther down the street as the parking lot becomes perpetually full.

I can understand its attraction, though, because it serves “real deal” border Mexican food. It does not seem to me to be typical of El Paso or Ciudad Juarez Mexican food because it makes such liberal use of chile con queso as a topping rather than the more ubiquitous red or green chile (although Kiki’s does have dishes with red chile and the chile con queso is their version of the green sauce). Even though the style is a little different, the flavors are very much in keeping with the fresh and local style food served in restaurants throughout El Paso.

Some of the highlights of Kiki’s include the superbly flavored Spanish rice, the refried beans, and a huge, homemade, and always fresh flour tortilla served with all of the combination plates and some of the “Specialties” (I think they adjust the prices upward to pay for such a work of art, but what you don’t eat you can take home and use it for breakfast the next day). I sometimes tend to take these normal accompaniments to a Mexican dinner for granted, but when you come to Kiki’s you will likely realize how important they can be to the overall quality and enjoyment of the meal. If anyone thinks Mexican food has to be cooked with lard to taste good, I challenge them to come to Kiki’s to see how good food cooked with vegetable oil can be. 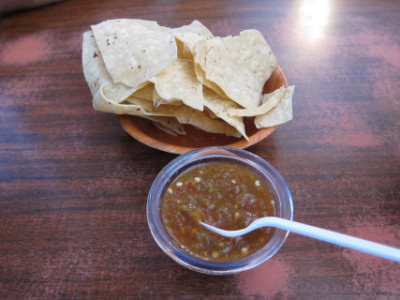 The green chile Salsa here is much spicier than any of the food they serve with green chile, and is excellent as is the norm in El Paso. It seems that they serve a small amount of chips, but it usually seems to be enough to be able to enjoy the potent salsa (and I believe you can get more chips if you request them).

Kiki’s “Specialties”
For the most part my favorite items here are the ones listed as their “Specialties” on the menu. While I like exploring the menus at many restaurants, I have also wished that others would do what Kiki’s has done and tell customers what they consider to be their specialties. I have a few favorites at Kiki’s that are not on their list of specialties, but for the most part I think their list is right on the mark.

Here is the entire list of Kiki’s Specialties as listed on their web site and menu:

Chile colorado was on an older list I had but is not currently listed as one of the Specialties.

Kiki’s green sauce is a key component in many of the Specialties. From my research and past experience it seems that their green sauce and chile con queso sauce are the same thing (or at least the flavor is very similar). One thing I have found to be true, though, is that Kiki’s green sauce is the reason that many of their dishes are so enjoyable and stand out from the ones at other restaurants. 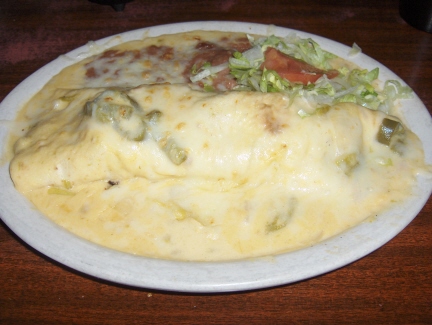 I think the dish where I most enjoyed Kiki’s “legendary Green Sauce” (the terminology from their web site) is the Burrito Special which is listed as one of the restaurant’s “Specialties.” This is one example where I think following the restaurant’s suggestions will in fact give you their best food.

Another one of my favorites is the Crab Enchiladas (served as the Saturday lunch special but available any time at the regular price). For these I recommend the green sauce because the crab gives an extra flavor component that for some reason seems to bring the green sauce to its full potential (I am not really a crab lover but I think having it on this dish is something a lot of people are going to want to try). 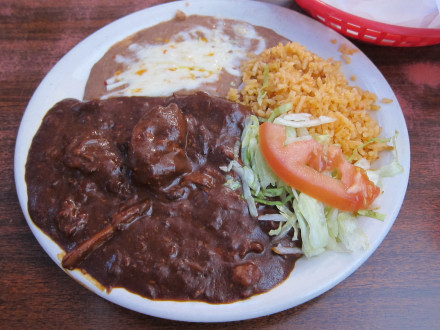 Chicken Mole is one of the specialties that does not have green sauce but which I think is very good (it  is their Sunday lunch special in addition to being on the Specialties menu and available all the time at the regular price). The mole served here was spicier than most I have tried in El Paso, and it was also very much on the sweet side (these two attributes together make a good combination, and this definitely was a very good mole).

Many of my friends and co-workers have talked about the machaca over the years, and there are others I have yet to try but which I am sure will prove to be very good. 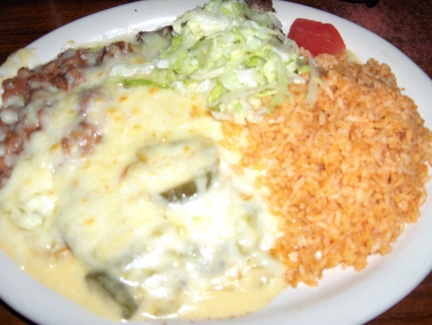 The Chile con Queso Hamburger Steak is the Saturday dinner special (although it can be ordered any time at the regular price). The now defunct La Paloma Restaurant had a chile con queso hamburger steak that was spicier and a little more flavorful than the one at Kiki’s, but I think Kiki’s is still ahead of most every other restaurant in town that tries to serve the same thing. Probably the key to the preparation of this dish is the inclusion of large chunks of green chile that make this a large flavor component of the dish. 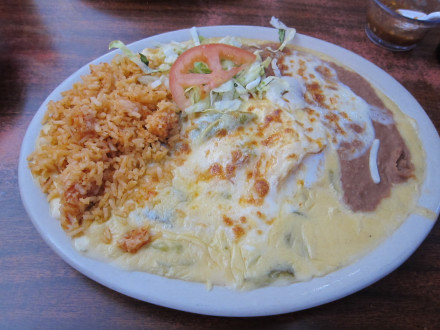 Kiki’s is not the only restaurant in town which tops Huevos Rancheros with chile con queso, but this is a very good version of it. Kiki’s opens at 10:30 daily and offers several breakfast items such as this one (or the machaca) for a late breakfast or for any time of the day.

Other Items
Items that are my favorites at most restaurants are not so here, with the Red Enchiladas being a case in point. They do not have a lot of red chile spice, although I think their toning down has been a fairly recent development (the flavor is still good, though).

Green Enchiladas are similarly not my favorite although the sauce is still good. The use of Kiki’s unique chile con queso as their green sauce on the enchiladas gives a fairly bland version of this dish in my opinion, although the same sauce on other dishes gives a quite satisfying contrast of flavors.

The Chile Relleno is something that I found to be tough and somewhat lacking in flavor, although I liked the Spanish sauce they serve on top (this sauce is not very spicy because you get enough spice with the chile itself). Chili Rellenos (as the restaurant spells it) are the Thursday dinner special, or you can order the same plate from the regular menu or get a chile relleno as part of a combination plate.

For a change of pace you can order Black Beans instead of the refried–both are very good (and vegetarian).

An Overview
The “Specialties” listed on the menu are definitely worth considering, and I think they are generally the best items at the restaurant.

The green sauce may be the most distinctive feature of Kiki’s, and is one of the reasons I keep coming back. The Burrito Special and Green Crab Enchiladas are two of Kiki’s Specialties which I think especially showcase the restaurant’s green sauce. The green cheese enchiladas, though, are something that did not quite hit the mark for me here.

Not all of the dishes here come with a free flour tortilla, but this is another item that I think is especially worth seeking out.