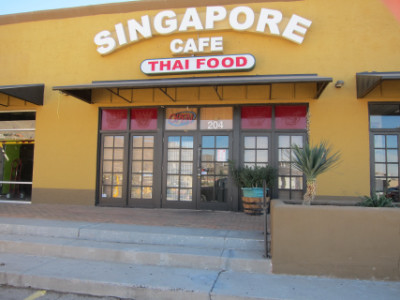 Some of my favorite types of food are Thai and Vietnamese, and I am very glad that these are almost ubiquitous throughout the United States (although the quality does vary somewhat from place to place).

What I have largely missed, though, is any experience with the “other” Southeast Asian countries (Laos, Cambodia, Myanmar, Malaysia, etc.). Lao cuisine is becoming more common but can only be found in certain cities. Malaysian food is one of my favorites when I can find it. Singapore is a Thai restaurant, but has some dishes that can loosely be called Malaysian (I think the food here is mostly fusion). What I do know is that it has been a very good addition to the El Paso dining scene..

One thing I have really wanted to find is food from Burma (now called Myanmar) and its famous tea leaf salad. I did not make the connection until recently, but Singapore Restaurant has a dish that seems to be at least loosely based on this, called Green Tea Chicken.

I ordered the Green Tea Chicken several times at the old restaurant but did not know that there might be a connection to Burmese food. Becky, Singapore’s owner, first offered it as a special, and later put it on the menu. It is still on the menu, and even though I liked it before, it had a flavor that I appreciated even more from my latest visit. The quality of ingredients was also very good, and stood in contrast to some other restaurants that may be good but not up to the standards I find at Singapore.

All of this has given me a renewed interest in seeing what Singapore has to offer (there are quite a few items I have not tried and others that might be worth another shot). The fusion concept has led to some disappointments for me, but I do know that other items are very worthwhile. 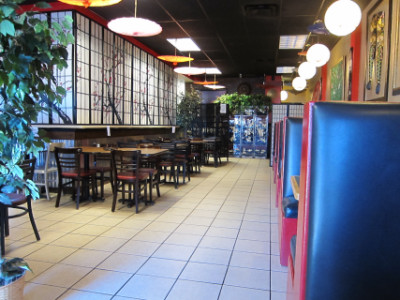 The dining room at the new Singapore Restaurant

Singapore has been in its new location at 3233 N. Mesa since 2018 (the restaurant fronts on Kern Drive just north of the UTEP campus). To me it looks smaller than the old restaurant but I like the modern look and the comfortable seating. Lunch specials last until 2:00 p.m. and the restaurant closes at 5:00 p.m. on Monday and Tuesday (it serves dinner Wednesday through Saturday).

Dishes from the “Old” Restaurant (4120 N. Mesa)
Note: these are items I have not tried at the new restaurant but I am including the information from my previous reviews.

Over the years one of the entrées I have enjoyed very much at Singapore Café has been Veggie Ginger Tofu, although I would not rate it the same as many of the ginger dishes served in the Seattle area and other cities. The one here includes tofu, ginger, mushrooms, peanuts, and snow peas as the primary ingredients, set on a bed of lettuce that I only consume if the rest of the plate is not sufficiently filling. I find the dish to be “sickly sweet” and off balance in flavor, but still the vegetables and tofu are of good quality and this is something I do not mind ordering. The dish is much better balanced when it has fish sauce, which does not come in the vegetarian version, but can be requested. 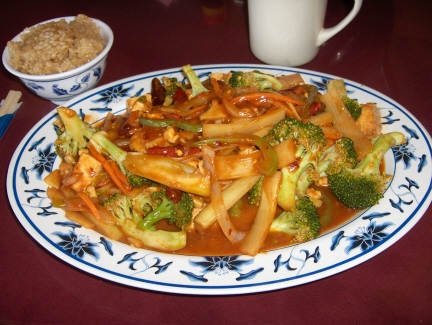 Yu Sang Broccoli is generally good in its vegetarian version, but can also be ordered with meat. Becky describes this as a “Chinese ex-patriot” dish, and it probably came from the large Chinese population in Thailand that mixed their own recipes with the local ingredients. To me this is one of the few dishes at Singapore Café that does not taste too sweet or “Americanized;” rather it has a good balance of flavors. It is surprisingly spicy, though, considering the lack of spice found in many of the other dishes. 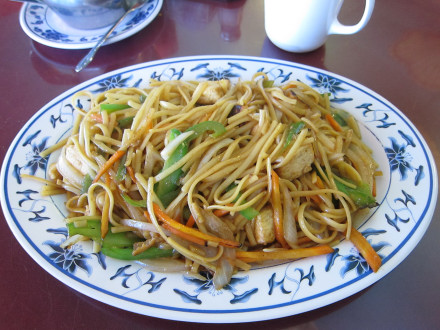 A very good vegetarian choice is the Veggie Mi Goreng, consisting of noodles with tofu and vegetables. I think this is usually considered to be a Malaysian dish, and over the years has been one of my favorites at Singapore Café. It is not one of the dishes that taste “sweet,” although it seems to have a sweet and sour contrast done in a traditional Asian way.

Curry dishes are the ones that have been the most disappointing to me. They do not seem to have the rich and full flavors I have experienced elsewhere, and in this case I would like them to be more “authentic” (as I have experienced them in other restaurants).

Several soups are served as entrées, but many of them are not as satisfying to me as at other Thai restaurants. The Tom Kha Gai (with coconut), however, has frequently been better than at many other places. 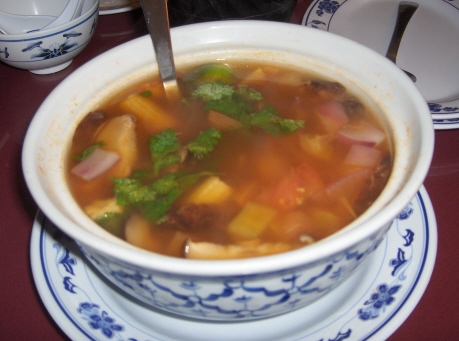 Tom yum is a spicy soup with lemongrass

Tom Yum is a spicy soup with pineapple and tomato, flavored with lemongrass. This is similar to Vietnamese style sweet and sour soup (canh chua), but is rather different from the versions of tom yum I have found at other Thai restaurants. I liked the chicken version better than the one with shrimp, even though the opposite is true with some other dishes. 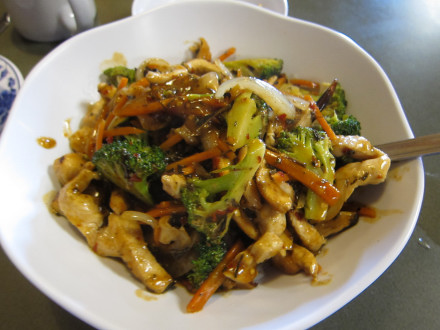 I have only seen tea leaf dishes mentioned in reviews of Burmese restaurants, and to date this dish is the only one I have experienced that has the tea leaf flavor (and it is one of my favorite dishes in El Paso). This is not the Burmese version that has popped lentils and other toppings, but I really enjoyed the one here (that is admittedly a chicken dish instead of the traditional “salad” that is served in Myanmar, so I can only make very limited comparisons to the way the Burmese version is described). 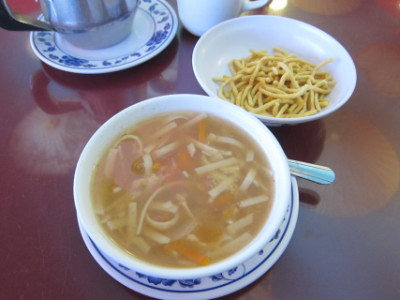 Over the years I have been a big fan of the delicious, slightly tomato flavored soup that is complementary with the lunch specials (or you can order it until 2:00 p.m.). The crispy noodles that come with it are excellent, and even if the choices for luncheon specials is limited the soup has been a good bonus. In November 2021 I got a soup that was very different, and did not have the noodles that are visible in the photo (and as a result gave me a thinner soup that I thought did not have as much flavor). This may be a fluke (which frequently seems to be a result of the current problems with the supply chain) but nevertheless I am not sure if the soup going forward will be the same as before. If it gets back to “normal” it will again be one of my favorite items here. 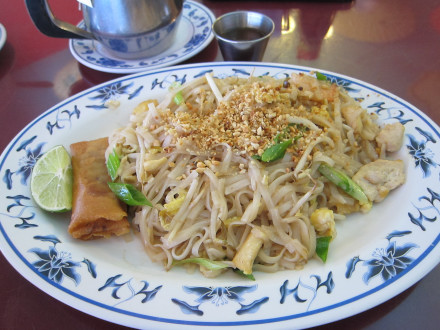 Pad Thai has been my favorite dish from the lunch menu, but I have not tried many of the others (now the choices are even more limited, and are down to about five items). The one pictured is the vegetarian version, made with tofu, that I used to order at the original location. I think the regular version is better, and compares well with ones in other Thai restaurants. This is a white to slightly brown colored dish that I was told is made with vinegar and soy sauce. It also comes with fish sauce (nam pla), and I personally think gives it a full flavor that the vegetarian version lacks. Some restaurants use tamarind sauce that turns the noodles a red color, but Becky does not. Bean sprouts provide substance but not much flavor, and are traditionally included in the dish. Crushed peanuts are spread on top, and fresh limes and chile paste are provided on the side for extra flavor. While many dishes at Singapore Café seem to be too sweet, the pad thai is not. Scrambled eggs are mixed in, and it is topped off with shrimp and chicken. The shrimp and chicken are both good, and some tofu is included as well.

In A Nutshell
One of Singapore’s main claims to fame (and to my heart) is that it is one of the few vegetarian friendly restaurants in El Paso, and offers dishes that actually have some flavor at times when I do not want to eat meat. However, adding fish sauce to the dish is really the critical factor in getting a Thai flavor even if it is otherwise vegetarian.

Singapore Café is also noteworthy for the specials and other dishes that are not served in any other restaurant in town that I know about. Some of my favorite dishes here are Malaysian rather than Thai, but calling the restaurant “Thai fusion” probably works as well as any description I can think of. In any case, I know I can call it “delicious.”